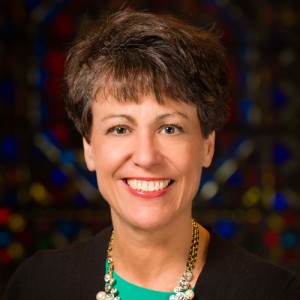 Hughes, who since 2013 has served as chief Administrative officer of St. Bartholomew’s Church in Manhattan, will replace interim Chief of Finance and Operations Canon Michael McPherson.

“I am convinced that Esslie will fill bring grace and blessing to this office,” said Bishop Dietsche, “and I am certain that those who will work with her on my staff, as well as the parishes, people and clergy of the diocese who depend on the services of this financial office, will find in her a colleague, a partner in ministry, and a consummate professional. I could not be more grateful for the work of Mr. Doug Mercer and the task force he headed in completing the work they were given with such an excellence result. I very much look forward to working with Esslie in the management of this diocese over the years to come.”

Ms. Hughes’ appointment followed a comprehensive search process, beginning in early October, that sought a candidate who would “fully embrace the mission of the diocese and enthusiastically work in harmony with multiple stakeholders within the distinctive culture of the church,” and who would, “in addition to strong general management and technical financial skills…be a collaborative leader with a compassionate, empathetic and patient nature.” (For the names of the members of the search committee, please scroll down.)

Prior to joining St. Bart’s, where she has been responsible for all of the church’s operations and revenue generating departments and is one of two senior members of the Rector’s management team, Ms. Hughes most recently held positions as director for philanthropy at Odyssey Networks and New York Director of The Public Company Accounting Oversight Board. This followed a successful and progressive 20-year career in the banking industry culminating in the position of division head for domestic private banking at The Bank of New York. Ms. Hughes has also served on the National Advisory Council of the Berkeley Seminary at Yale, the Board of New York Theological Seminary, the Stewardship Committee and Board of Marble Collegiate Church, and the Board of the New York Junior League. She graduated from Wesleyan University with a Bachelor’s degree in Mathematics and Economics in 1979 and from the University of Chicago Booth Graduate School of Business with an MBA in 1981. She has also completed several courses towards a Master of Divinity degree at New York Theological Seminary.