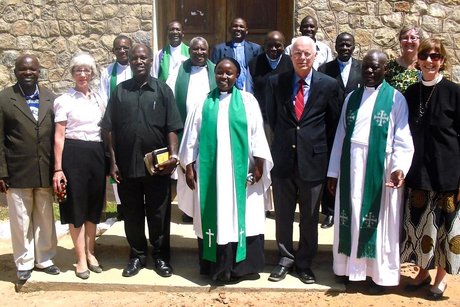 [Anglican Communion News Service] In a historical day for the Anglican Church of Tanzania, the Rev. Canon Hilda Kabia was installed as the first female principal of a theological college in the country.

The new principal of Msalato Theological College of St. John’s University of Tanzania is a familiar face at the college, having taught there for the past nine years and in the mid-1990s, and having served as Dean of Students.

“While I was aware of the historical significance of Canon Kabia’s appointment, she was selected because of her qualifications and long experience in working at educational institutions in our diocese,” said Bishop of Central Tanganyika Dickson Chilongani.

Kabia said her vision for Msalato Theological College is to “form pastors and lay leaders, both men and women, for a holistic ministry relevant to their context.”

Lack of financial resources will be a primary challenge, she added, noting that the need constantly to seek financial aid for student fees and faculty salaries detracts from the administration’s ability to focus on delivering a quality education to future servants of the church.

“All of these things can be accomplished if the staff works together as a team and if we listen to God to be sure that these are also His priorities,” she declared.

The next in a line of ‘firsts’
This is not the first “first” for Kabia as a woman in ministry in the Diocese of Central Tanganyika. She is the first female chairperson for the House of Clergy and the first female general secretary to the synod. And at her ordination in 2003, she was one of only eight ordained Anglican women in Tanzania.

The Diocese of Central Tanganyika under the late Bishop Mdimi Mhogolo was the first in Tanzania to ordain women, beginning in 2001. There are now more than 40 female priests in the diocese.

This year, a third of the incoming Diploma in Ministry students at Msalato are women, according to Kabia. “Although challenges remain in a traditionally patriarchal society, the diocese is already experiencing the positive effect that these [ordained] women have made [as] role models,” she said.

She has served as secretary of the Mothers’ Union in Tanzania and as a theology tutor at Bishop Madinda Christian Formation Training Centre.

This report is based on a contribution from the Rev. Sandra McCann, communications director of Msalato Theological College.