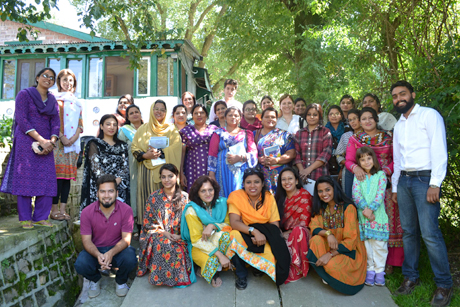 Participants in the women as peacebuilders workshop. Photo: Diocese of Raiwind.

[Anglican Communion News Service] The Church of Pakistan’s Diocese of Raiwind held a three-day peace building workshop for female teachers from a number of key educational institutions of Raiwind and Lahore last month. More than 20 teachers from St. Peter’s High School, Lucie Harrison High School, and Wesleyan Schools, took part in the workshop which was designed to increase capacities of working women to ensure that more women are meaningfully involved in peace processes, conflict resolution, and peacebuilding activities.

“All cultures are continuously undergoing change,” the diocese says. “There are no cultural traditions that have always existed. Humanity examines whether our cultural traditions serve our basic human needs and improve our lives. Many men and women believe that discriminating against women hurts communities. The state of the world now requires women’s skills and energies for peacebuilding more than ever. It is time for all cultures to encourage and allow both women to build peace.”

The Rev. Evelyn Bhajan, the presbyter-in-charge of Central Church of Praying Hands, talked about the role of Abrahamic religion in contemporary conflicts. She highlighted that all the Abrahamic religions viewed themselves as an oppressed minority; despite the fact that they build kingdoms and countries.

“Religion does not mean the same thing in all places, at all times and to all people,” she said. “Any conflict may have multiple causes. One cannot understand religion’s relationship with conflict unless it is considered with in its political and cultural contexts wherever, religion is involved, it is a very powerful factor.”

She also suggested ways in which teachers can play their role in peacebuilding. She said that substitution periods are the best time for teachers to talk about concept of conflict and its management, resolution and transformation. She further said that teachers must show their conviction through their actions. She further suggested that students should be given a free and safe space where they can express themselves fully.