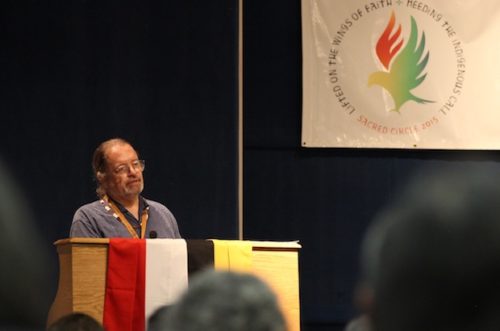 National Indigenous Anglican Bishop Mark MacDonald calls on Anglicans to be vigilant against climate injustice, saying “the poorest, those on the land, are suffering the most.” Photo: Anglican Video

[Anglican Journal] The very essence of climate injustice—a better word than mere “change” to describe the environmental havoc wreaked by industrial society—is making those least responsible for it suffer most. That was a core message that Mark MacDonald, national Indigenous bishop of the Anglican Church of Canada, sent in his August 17 address on climate change to attendees at the eighth national Sacred Circle, being held in Port Elgin, Ont., August 16–22.

“That’s what climate injustice is all about: those who created it are suffering least; the poorest, those on the land, are suffering the most,” he said.

“The basic problem is that the colonial powers began a process of taking away our land, and that process continues today,” he added, with Indigenous people currently being drawn away from their ancestral territories at a faster pace than ever before. “It is different now, but it is still a powerful thing.” Unlike the naked land theft of the early European colonizers, those in power today do it economically and technologically, MacDonald said. “They give with one hand and take away with two.”

And with Russia, Canada and the U.S. all staking disputed claims to the Arctic, matters will only get worse, he said. “It is essential that we stand up for our rights and say what is really happening in that region.”

The bishop also recounted a tour around an Athabascan community in Alaska with Elder Sidney Huntington, who had built six community structures when only one was needed. When MacDonald asked him why, he replied that he had built them for posterity, for the time when all the cranes and engines of industrial development have disappeared. “All of this stuff is going away, and the young people will need to know how to survive,” Huntington said.

It is crucial to keep the elders talking about the traditional values associated with the land, MacDonald said, noting that often elders will see things coming up on the horizon that should be faced today. Ban Ki-moon, United Nations secretary-general, he added, has stressed the critical importance of Indigenous people and their values to the future of the planet. MacDonald also noted that not since the fateful asteroid strike of 65 million years ago are so many of God’s creatures passing so quickly from existence. “It’s amazing to me that people can watch this sort of death and not feel something is wrong.”

MacDonald said that many people across Turtle Island (North America) rejoice at the signs of progress since the end of the residential schools, “but we have to understand that for many people, particularly the poor, things are getting worse.”

Turning to Indigenous people in the Bible, a topic he’s often asked about, MacDonald said that in scripture “when someone wants to get back to God, they become Indigenous. John the Baptist dressed in camel hair and ate locusts.” And when the prophets Elijah, Elisha and Jeremiah wished to find peace with God and call the nations back to righteousness, they, too, returned to Indigenous ways.

The forces of power, money and greed are still destroying children, just as King Herod did in the Bible, and a stand must be taken against them, he said. MacDonald quoted Paul (Ephesians 6:10): “Put on the full armour of God, so that you can take your stand against the devil’s schemes. For our struggle is not against flesh and blood, but against the rulers, against the authorities, against the powers of this dark world and against the spiritual forces of evil in the heavenly realms.”

He called on Indigenous peoples to return to “the way of life that God has given us, a spiritual return, a way we are called to by our elders…who have been talking about this for a long time.”

Above all, he urged vigilance about climate injustice in the face of escalating economic development that threatens to destroy the land on which Indigenous people depend for life. “What would a people’s movement against this look like? It would look a lot like you,” he concluded.