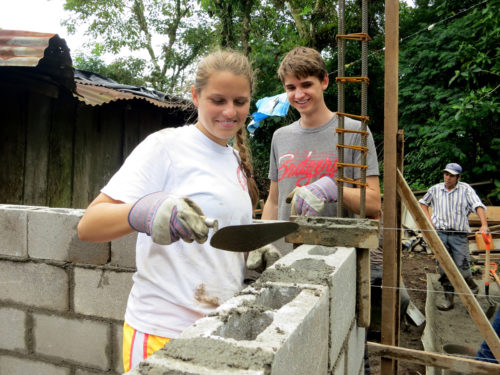 [St. John’s Episcopal Church] For the 10th consecutive year, St. John’s Episcopal Church in Larchmont, New York partnered with Bridges to Community (a non-profit community development organization based in Ossining, New York), to travel to Nicaragua on a building and cultural exchange trip. In the last decade, nearly 100 parishioners and friends have worked side by side with Nicaraguan families to build homes, vented stoves, and classrooms; and to raise funds for the construction of an elementary school in 2011 in honor of Marilyn Pardo, the retired head of the St. John’s Nursery School.

Multiple trips to Nicaragua have raised the parish’s awareness of the commonality of issues faced in the developing world, regardless of the hemisphere in which the country is located. Living in the Nicaraguan communities in which they work, volunteers have witnessed unsafe water supplies, poor sanitation, limited access to education beyond elementary school, entrenched poverty, corruption, and lack of economic development and access to health care.

Addressing both housing and sanitation issues, a 14-person team from St. John’s returned in early July from a week-long trip after constructing their 24th cinder-block house, and completing a newly inaugurated project, bio-digesters. The volunteers worked in the impoverished Nicaraguan community of Mojon, in the northern coffee-growing region of Jinotega. Nearly 60 percent of Jinotega’s residents live in extreme poverty and for most people, a safe and solid home is only a dream. Reality is a leaky house with a dirt floor cobbled together with scrap lumber, rusted metal and plastic. 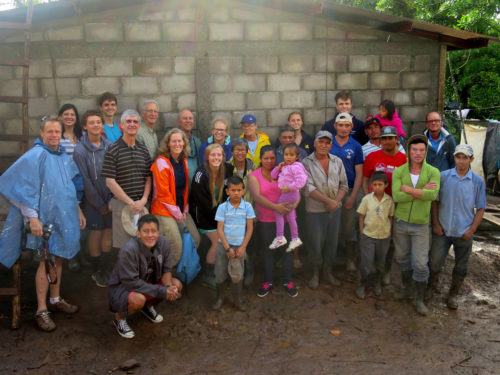 Trip participants and the beneficiary family celebrating the completion of the house. Photo: Linnet Tse

The St. John’s group helped to make a dream come true for Doña Valentina Cruz and her husband, Renee, and their five children and two grandchildren who now have a sturdy earthquake resistant cinder-block home. In addition, the group built two latrine-linked bio-digesters designed to convert human waste into energy (methane gas) that can be used to provide cooking fuel and to make a liquid fertilizer. Perhaps more importantly, it is a sanitary method to dispose of waste in a terrain where it is nearly impossible to dig latrines below the water table.

During the week-long trip, volunteers lived in the community in the cinder-block home of a local community leader. Accommodations were dormitory style with food prepared by local cooks, with rice and beans, the local staples, offered as a part of every meal. Volunteers also gathered for a daily “reflection,” a time to consider and share their experience and observations. The reflections are an important part of the Bridges program, as are interactions with the local community, both on and off the worksite.

The St. John’s group included a mixture of students and adults, veterans and first-timers, and friends and family members. But the trip was not just about construction. As volunteers worked alongside local masons, beneficiary families, and community members, new friendships were formed. There was time for afternoon soccer games, piggyback rides, art projects with the children, and conversation. Smiles and gestures went a long way towards helping volunteers and locals learn about each other. First time participant, Colin Clay, reflects, “Something that stands out from my week in Nicaragua are the ‘conversations’ I had with Don Renée at the end of the work day.  Neither of us really understood what the other was saying but somehow meaningful communication took place.  With much nodding, smiles, pointing and gestures I think we may have communicated more effectively than a number of conversations that I have had with people that speak English!  The specific content of our conversations may have been lost but not the meaning – that was pretty special.”

A highlight of the trip was the fiesta that St. John’s hosted to celebrate their 10 years of commitment to Nicaragua. Over 150 adults and children from the two neighboring communities attended. Pick-up trucks driven by Bridges’ staff stopped for families along the main route to bring them to the party. Ice cream and cupcakes were offered to all, local musicians entertained, an enormous piñata insured great fun, party games were played, and everyone had a wonderful time. The children’s delight was palpable and infectious.

It doesn’t take long for first-time volunteers to figure out why Bridges runs these trips. As Cathleen Ketcham expressed, “As a first timer, I am overwhelmed with what we did and just how necessary this kind of work is. I really hope I made a difference!”

A veteran of the trip, Harry Sober, shared how profound an impact the trip had on his niece who accompanied him: “The take-aways were very positive: my niece gained a powerful and unique perspective of appreciation for her own current life opportunities and adventures that are provided to her as well as the strong family bond that exists back home. Additionally, she knows that she contributed through dedicated hard work to make a small piece of the world a better place to live.”

In the end, Bridges’ goal is for its projects and experiences to be sustainable, not just for the beneficiaries, but for the volunteers as well. To this end, each family beneficiary agrees to pay 20 percent of the cost of the materials for the house through small monthly payments at 0 percent interest over seven years.  Not only does this contribute to a sense of pride in ownership, in addition, the money is paid into a community fund (not to Bridges) for usage to be determined by the community and its leadership. For its volunteers, Bridges hopes that the trip experiences will make a lasting impression and cause participants to think more deeply about cultural connections and humanitarian issues.

Linnet Tse, one of the trip organizers for St. John’s, who has been on multiple trips remarked, “We often discuss that we feel we have benefitted more from the experience than we have given. It opens us up to the issues faced in the developing world and engenders admiration for the perseverance and ingenuity of the Nicaraguan people. It’s hard to say good bye at the end of the week, but there is a shared sense of having been part of something special – which is why we keep returning.”

— Carla Berry is a member of St. John’s Church, Larchmont, New York. For the last 10 years she has been one of the organizers of the mission trip to Nicaragua. She was a member of the vestry when the decision was made in 2006 to undertake an international mission trip.