Presiding Bishop Katharine Jefferts Schori, center, celebrated the opening Eucharist of General Convention, assisted at the altar by the Rev. Lauren Welch, Diocese of Maryland deacon for mission, left, and Margaret McLarty, platform master of ceremonies. The service used 49 baskets of bread from a local bakery and 25 flagons of wine at the altar and 12 Communion stations. Photo: Sharon Sheridan/ Episcopal News Service

[Episcopal News Service – Salt Lake City] The 78th General Convention of The Episcopal Church opened with a call to join the hard communal work of building the road to God’s kingdom.

Preaching at the Salt Palace Convention Center here, home to the June 25-July 3 convention, Presiding Bishop Katharine Jefferts Schori told thousands of worshipers: “This may be an Episcopal convention, but we are all supposed to be John Baptists and Jane Baptists. Our task is to build that straight road, knock down the privileged heights, fill in the sloughs of despair and make the road flat enough for all God’s people – and that includes Baptists, Episcopalians, Jews, Hindus and ‘nones.’

“We’ve been baptized into Jesus’ baptism as well as John’s, and called to the kingdom work all the prophets proclaim: to be light in the darkness, strength and comfort for God’s people, gathering the lambs and leading ewes to shelter, and showing the healing power of forgiveness. That is the road to the peaceable kingdom,” the presiding bishop said. The Eucharist celebrated the Nativity of John the Baptist (transferred from June 24).

“We won’t reach our journey’s end,” she concluded, “unless we go together in company, in solidarity and partnership, trusting that God has provided what is needed – if we share the work and the gifts. That is the deepest meaning of forgiveness of our sins, which are always bound up with self-centeredness and selfishness. Remember that in the heat of debate! God has given us a variety of perspectives, and the body needs those gifts.”

The full text of the presiding bishop’s sermon is here. 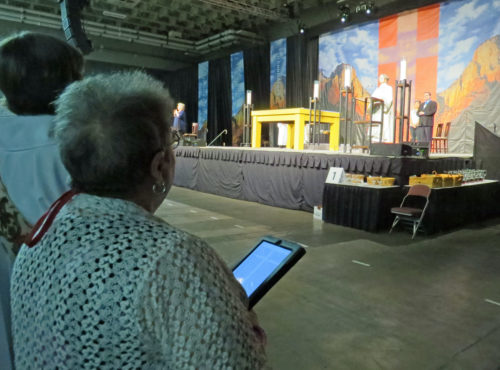 For the first time, this General Convention is not using printed worship bulletins for the daily Eucharists. Worshipers accessed the order of worship via electronic devices during the opening service on June 25. Photo: Sharon Sheridan/ Episcopal News Service

An attendance figure for the House of Bishops is not yet available.

Beyond deputies and bishops, thousands of other liturgists, volunteers, visitors and exhibitors attend the convention. As of June 24, nearly 4,500 people had preregistered to attend, and more than twice that number is expected to attend at least part of the convention, according to the Rev. Michael Barlowe, executive officer of General Convention.

The Episcopal Church Women’s Triennial Meeting is taking place concurrently with General Convention, with its members attending the United Thank Offering ingathering during the June 28 Eucharist.

Like the rest of the convention, the worship services will be as paperless as possible. At the opening Eucharist, most participants followed the order of service on their iPads or other electronic devices.

The service used one-and-a-half cases of Taylor Tawny Port and 96 loaves of bread from a local bakery, Eva’s Boulangerie. The elements were distributed by 144 eucharistic ministers at 12 stations. Each daily worship service also involves 36 to 40 deacons, two to six vergers and a dozen altar guild members. 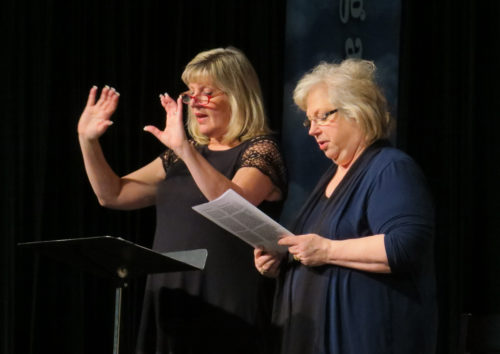 Anyone attending the convention is welcome to volunteer when entering the worship hall to become a eucharistic minister for that service, said Margaret McLarty, platform master of ceremonies for the convention. “We want broad participation. That’s why we call it the community Eucharist.”

That community includes the convention’s children. Those participating in the children’s program sat in a reserved area at the front of the worship space. Before the service, many of the children snuggled up in blankets on the floor.

“They’re all going to fall sleep during the service, and then we’re going to have to wake them up for Communion,” predicted counselor Georgia Atkinson of Concord, New Hampshire.

“Every part of [the worship] is very intentional,” McLarty said. “We’re trying to have a sacred environment within the midst of General Convention where all will be inspired to know a real presence of God.”