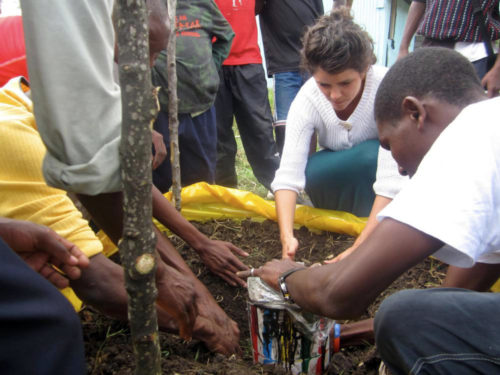 Natalie Finstad, an Episcopal Church missionary who served in Kenya, helps to plant seedlings at a young adult leadership event with one of Tatua Kenya’s partner organizations, Nyumba ya Tumaini. Photo: Tatua Kenya

The 78th General Convention, meeting June 25-July 3 in Salt Lake City, Utah, will be asked in two proposed resolutions to commit to its ongoing support and development of the Episcopal Church’s Young Adult Service Corps (YASC) and Episcopal Volunteers in Mission (EVIM) programs.

Through these programs, hundreds of Episcopal missionaries have chosen to embrace a life-changing experience of walking alongside a community often far removed – both geographically and culturally – from their own.

The Standing Commission on World Mission and the Episcopal Church’s Executive Council – which submitted the two resolutions – hope that the programs will be developed and the opportunities increased in the 2016-2018 triennium.

“Global mission is essentially incarnational,” said Sandra McPhee, a lawyer from Evanston, Illinois, who has served as chair of the Standing Commission on World Mission, one of the church’s interim bodies that works throughout the triennium and reports to General Convention with recommendations on the church’s priorities and policies.

“Young adult missionaries in the YASC program and more-seasoned volunteers for longer-term commitments through EVIM experience God’s action in their lives and in the lives of others around the world,” McPhee, a lifelong member of St. Matthew’s Episcopal Church in Evanston, told ENS. “Even more, by sharing their experiences with their parishes and when they return, they manifest God’s love.”

Continued support for YASC and EVIM is essential to the life of The Episcopal Church, McPhee added. “We must engage with our partners outside of the U.S. This ongoing engagement is important to them and it is vital to us. We live out our baptismal covenant being with those who are different from us, seeing the face of Christ reflected in them and working together for God’s mission.”

Resolution A112, submitted by the standing commission, calls on General Convention to encourage dioceses, seminaries, and parishes to recruit and support YASC and EVIM missionaries. The resolution proposes an increase in the number of YASCers to 30 in 2016, 40 in 2017, and 50 in 2018, and the number of EVIMs by 10 percent per year.

At the time the commission filed its report, it didn’t know that a record-breaking 45 young adults representing 27 dioceses would file applications to serve in the YASC program for the coming year. Twenty-seven of those 42 have been accepted onto the program for 2015-2016.

The 2013-2015 budget passed by General Convention allotted $1 million to make “a missionary experience available to all Episcopal young people through such programs as the Young Adult Service Corps program for a gap-year experience between high school and college or work.”

That allocation is part of the way in which the Domestic and Foreign Missionary Society is responding to the third Mark of Mission, which calls on members of the Anglican Communion to respond to human need in loving service.

The Domestic and Foreign Missionary Society is the legal and canonical name under which The Episcopal Church is incorporated, conducts business and carries out mission.

“When I first signed up to do YASC, I had no idea how much it would change my life,” said Will Bryant from the Diocese of Western North Carolina, who spent his first year as a YASC missionary working with the Mission to Seafarers in Hong Kong, and is currently serving a second year at the Joel Nafuma Refugee Centre in Rome.

“In my two years with the program I have grown spiritually and mentally in ways that I would have never imagined,” he told ENS recently.

Bryant said that his experiences with the YASC program have helped him to realize that “whether you are an Afghani refugee, a Filipino seafarer or an American missionary, we are all seeking the same thing: a safe, comfortable place to call home, employment to provide for our families and community, and a deeper connection with our creator. … Now, after living in two completely different countries and continents, I can safely say that I have become more confident in my faith and in my abilities as a human being. I don’t exactly know what the future holds after my time in YASC, but I do know that whatever that may be, I will be well-prepared because of the lessons I have learned as a missionary.”

“YASCers are valuable in developing relationships with global partners and for what they bring back to the communities from which they came,” according to the explanation offered by the Standing Commission on World Mission in its “Blue Book” report to General Convention. “Likewise, EVIMs are important servants of the church, as they bring their experience and expertise to the places where they are received, and bring the global church back to their communities.”

The Executive Council has submitted Resolution A013, calling on the 78th General Convention to affirm the growing success of the church’s global mission work, “especially the global networks, relationships, and spiritual developments seen” in the YASC and EVIM programs.

The resolution calls for the opportunities for global mission to be “increased, diversified, and prioritized” by the time the 79th General Convention meets in Austin, Texas, in 2018, and urges every diocese “to explore the opportunities for global mission work and encourage as many people as possible to apply for, attend, and complete a mission assignment as made available by these programs.”

Martha Gardner, chair of the Executive Council’s Joint Standing Committee on World Mission, said that every Episcopalian “needs to know about the wonderful work our missionaries are doing.” She said that she has heard so many stories about the mutual benefits experienced by The Episcopal Church’s missionaries serving throughout the world, but also by its Anglican partners and both the sending and receiving dioceses.

“I love the model of how we are doing our global mission work,” she said. “Working with dioceses and networks, our global partnership staff is facilitating partnerships on all levels, and it is imperative that we continue to support that work which offers Episcopalians of all ages an opportunity to be agents of Jesus’s transformational mission in the world.”

The Episcopal Church has a long history of missionary involvement, explained McPhee, citing the earliest missionaries who traveled to the Midwest and western parts of the United States to the women supported by the United Thank Offering who worked in Asia and Africa.

But mission work has changed, she said. “Instead of a lifelong commitment, short-term missionaries may be sent by a parish or diocese for a two- or three-week commitment. Our Young Adult Service Corps sends people to serve for a year or two in a variety of settings around the world. Some of the YASCers find that they are called to ordination or a deeper, longer commitment to serving God’s mission in the world. Others go on the other careers but all of them cite their time as life-changing and enriching.

“Perhaps most important, the way we think about global mission has changed,” she added. “We see our brothers and sisters in Christ around the world as partners and companions, understanding that we have much to learn from each other.”

For instance, Jim and Mary Higbee and Sue Dauer visited Kenya for just one month in 2014 to provide hands-on teacher training that they will continue to monitor in the coming years.

Copley’s office also continues to work with Episcopal Church dioceses to strengthen their companion relationships and to support medium-term mission placements of older adults as well as placements for YASCers.

“I see mission service as providing technical expertise to empower others and also as an avenue to strengthen companion relationships through the ministry of presence,” he told ENS.

The Standing Commission on World Mission (SCWM) has continued to advocate for and support the sending of YASC and EVIM missionaries “with the purpose of strengthening and deepening relationships throughout the Anglican Communion, fulfilling our baptismal covenant to ‘seek and serve Christ in all persons,’” according to its report.

The commission acknowledged that its future is unclear, pending the outcome of the report to General Convention from the Task Force for Reimagining the Episcopal Church.

However, SCWM members “hope and pray that the foundations of the multiple global relationships that have been strengthened by many years of compassionate work will remain solid. … The level of trust that has been established through the years by the work of SCWM should be strengthened, especially in this time of world turmoil, rather than weakened by severe change that may not be clearly understood by our global partners. That being noted, the SCWM is moving forward with goals to enhance work that has already begun, to restore trust that has been eroded by promises that have not been kept, and to capitalize on the vital interest in mission work that youth and young adults are displaying.”

ENS video stories highlighting the ministry of YASC missionaries are available below.