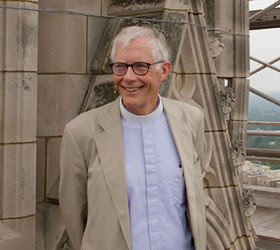 [Episcopal Divinity School press release] The Very Rev. James Kowalski has announced that he is retiring from Episcopal Divinity School’s board of trustees, where he has served for five years and was elected chair three times. In a private message to fellow trustees, Kowalski expressed his hope and prayers for a bright future for the institution he called “transformational in my life.” Kowalski currently serves as dean of St. John the Divine Episcopal Cathedral in the Diocese of New York.

The trustees have named the Very Rev. Gary Hall as chair of the board of trustees. Consistent with the board’s traditional practice, an election of all officers will occur at the annual meeting to be held in October 2015. Hall has served as dean of the National Cathedral in Washington, D.C., since October 2012. An ordained minister for more than 35 years, Hall currently serves as the National Cathedral’s chief ecclesiastical leader and executive officer, working closely with the bishop of Washington and governing bodies to shape and support ministries to the city of Washington, the nation, and the world.

In assuming this role, Hall said, “I am deeply grateful for Jim Kowalski’s board leadership, and I look forward to working with trustees, faculty, students, alumni/ae, and staff as we chart the course for EDS in the coming decades. EDS has a unique role and mission in the church and the world. Together we can strengthen the school community, develop its resources, and ensure its sustainability in the years to come.”