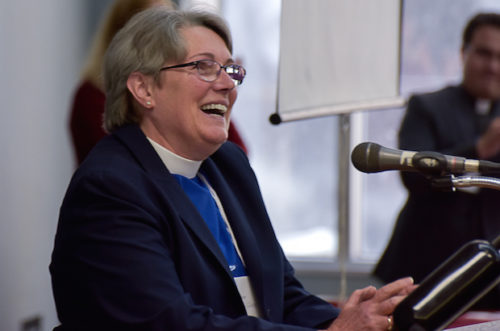 “Montreal has always been in my heart,” says Bishop-elect Mary Irwin-Gibson, whose election is greeted by applause. She served parishes in Montreal for 28 years before moving to Kingston, Ontario. Photo: Tony Hadley

[Anglican Journal] Mary Irwin-Gibson, dean and rector of St. George’s Anglican Cathedral in Kingston, Ont., since 2009, has been elected the first female bishop of the Anglican diocese of Montreal in its 165-year history.

Irwin-Gibson, 59, who served parishes in the diocese of Montreal between 1981 and 2009, was elected bishop on a fourth ballot on Sat., June 6,  over another woman candidate, the Rev. Karen L. Egan, 57, director of pastoral studies at the Montreal Diocesan Theological College.

Bishop-elect Irwin-Gibson will be ordained following ratification by bishops of the ecclesiastical province of Canada, made up of seven dioceses in Quebec and Atlantic Canada. She will succeed Bishop Barry Clarke, 62, who will retire in late August after serving since 2004.

In the final ballot, Irwin-Gibson outpolled Egan 51-26 among lay delegates to an electoral synod and 32-27 among clergy delegates. The church laws, or canons, require a majority of votes among both lay and clergy delegates.

“Montreal has always been in my heart,” said Irwin-Gibson after her election was announced. The bishop-elect served as rector of Holy Trinity Church in the resort community of Ste. Agathe des Monts, in the Laurentians, from 1991 to 2009.

She urged them to join her in putting their trust in the Holy Spirit to see what the future will bring. “I am calling you to pray for our diocese. The Lord does with us what he wants to do with us,” she said in her brief bilingual remarks. “Let us lay our lives before God in a spirit of dedication and love.”

Two other candidates nominated at the beginning of the electoral synod—the Rev. Patricia Kirkpatrick, a professor of McGill University’s faculty of religious studies, and the Rev. Canon Joyce Sanchez of Trinity Memorial Anglican Church, at a strategic site in west-end Montreal—also dropped out after the second ballot.

Irwin-Gibson outpolled Egan in the third ballot but had only a plurality among clergy, a half-dozen of whom voted for candidates who were out of the running. So a fourth ballot was required.

Irwin-Gibson, in a brief and informal interview, said that she is open to the idea of a merger of the dioceses, “but this is a decision to be made by synods, not bishops,” and would involve “long and complex study and negotiations.” Drainville said he remains hopeful about a merger as a means of bringing about a church that is more open and responsive to today’s world.

The lead-up to the election was marked by a relative absence of public debate, partly as a result of efforts by the diocesan chancellor, David Eramian, to avoid electioneering. One result of this may have been that there was almost no debate about same-sex marriage or blessings, a topic of controversy during Clarke’s term.

The four advance nominees were permitted to distribute to delegates and make public a relatively brief statement of their “vision for episcopal ministry in the Diocese of Montreal.”

Irwin-Gibson listed nine priorities, of which the sixth was “to continue the Diocese of Montreal’s inclusive policy of ordaining partnered gay people.” She was the only one of four whose statement mentioned the topic.

Her statement also mentions that she earned an executive MBA degree from the Université du Québec â Montréal in 2005 “with study focused on the Church and its future.”

The church is in a period of transition, she notes in her statement. “That is not new for the Church. We have a message of hope, grace and healing to share; that message is rooted in our life in Christ. Although we may wonder what lies ahead, the mission of Jesus Christ is not diminished and there is much remaining for us to do.”

Meanwhile, diocese of Ontario Bishop Michael Oulton issued a statement congratulating Irwin-Gibson. “It has been a joy and pleasure to work with her in this diocese and while I am feeling a few twinges of loss beginning to settle in which are growing by the moment, I am thrilled that we will continue working together as colleagues in the House of Bishops.”  He added that Irwin-Gibson “served us so well here in the Diocese of Ontario and particularly in supporting my ministry as bishop over these past four years. Our loss is a gain for the Church and the people of Montreal.”