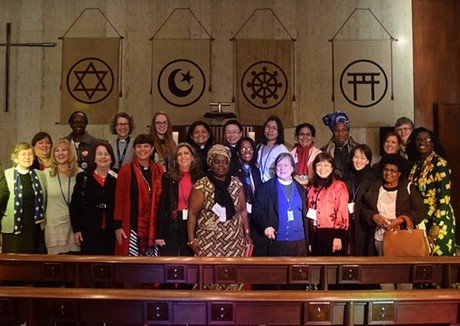 [Anglican Communion News Service] The Anglican Communion delegation to a recent U.N. meeting has lifted up the full inclusion of women at all levels of decision-making and leadership in the church as an issue for action.

In a statement from the 59th Session of the UN Commission for the Status of Women (CSW59), the all-woman delegation urged Anglicans and Episcopalians to take bold, giant steps towards gender equality.

Gender-based violence, climate change, human trafficking and modern slavery, statelessness and birth registration are highlighted in the statement signed by the 19 Anglican Communion delegates, each officially representing her province.

The statement calls on church leaders to lobby their governments for the implementation of policies improving women’s access to healthcare, limiting carbon dioxide emissions and promoting the use of ‘green’ technologies.

The Anglican women delegates also agreed on the importance of grassroots action where local churches use their connections, create awareness and educate communities on such critical issues as ending child marriages, rape and domestic violence. In addition, they encouraged local churches to use ministry opportunities such as baptism to raise awareness of the importance of registering the birth of children.

According to U.N. data, one in three women is a victim of gender-based violence. The statement highlights the importance of men and women working together: “Many women feel unable to speak out about their experiences, or feel unheard, because of legal and cultural constraints. We welcome men and boys who recognize the equal humanity of women and girls and encourage them to join us in eradicating gender-based violence.”

The statement also invites provinces of the Anglican Communion to support the Global Freedom Network, a faith-based joint initiative of the Pope and the Archbishop of Canterbury to eradicate modern slavery and human trafficking by 2020.

“Gender equality applies to all human beings and should be a discussion for all women and men, girls and boys,” concludes the statement.