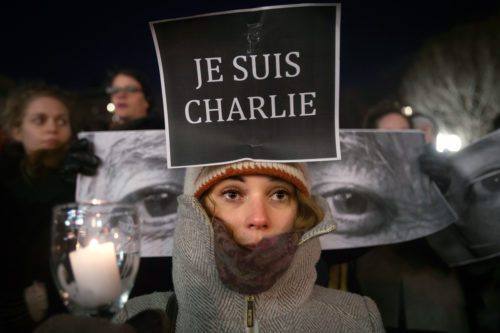 Amandine Marbach from Strasbourg, France, takes part in a vigil to pay tribute to the victims of the Jan. 7 shooting in Paris. Photo: Reuters/Carlo Allegri

[Episcopal News Service] Christian and Muslim leaders have strongly denounced the Jan. 7 attacks in Paris when suspected Islamist terrorists stormed the offices of satirical magazine Charlie Hebdo and opened fire during an editorial meeting. Twelve people were killed, including two police officers, and 10 were wounded in the attack, the worst act of terrorism in France for 50 years.

France awoke Jan. 8 to reports that several arrests had been made in Reims overnight in connection with the attacks and news that a gunman had killed a policewoman in an incident in southern Paris. It is unclear whether the latest shooting is related to the Charlie Hebdo massacre.

Police are now hunting for two brothers who are the main suspects in the attack. Two men fitting their description reportedly robbed a service station in north Paris during the morning of Jan. 8. A third suspect has surrendered, according to reports.

“It should be clear to all that this attempt to divide and intimidate people has failed,” said Bishop Pierre Whalon of the Convocation of Episcopal Churches in Europe in a statement, noting that spontaneous gatherings of solidarity with the victims were taking place in dozens of cities across France. Demonstrations and vigils also were held throughout the world.

Charlie Hebdo is well known for its satirical representations of religion, including caricatures of the Prophet Muhammad, for which the magazine has faced previous attacks and its editorial staff has received threats. “Charlie Hebdo is adept at satirizing religion and also routinely makes fun of all sorts of other subjects and people,” Whalon said. “This is their right. Freedom of expression is the only guarantor of liberty, including the freedom of worship.”

Whalon called on “all people of good will to pray as they feel able for the repose of the victims, for their families and friends whose lives will never be the same again. We must ask for healing for the wounded as well. We must also pray for the assassins, that they turn from violence and accept judgment. And our prayers must be accompanied by acts to help the nation heal and grow stronger in solidarity.”

Archbishop of Canterbury Justin Welby called the terrorist attacks “an act of the most extraordinary brutality and barbarity. This violence is demonic in its attack on the innocent, and cowardly in its denial of the basic human right of freedom of speech.”

Welby said in a statement that the people of France “will rise courageously above the challenge of this vile attack and continue to demonstrate strength and confidence arising out of their great history. Our prayers and thoughts are especially with those who have been killed and injured and their families. I pray also for those involved in pursuing the terrorists.”

Whalon acknowledged that the first voices to express outrage were Muslim leaders. “Among them was Imam Hassen Chalghoumi, whom I have known and admired for many years. I join with him in deploring this ungodly attack, ‘unworthy of Islam,’ and echo his call not to confuse Muslims with the ‘criminals’ who perpetrated this vile act.”

Chalghoumi, imam of the Drancy mosque in Paris’s Seine-Saint-Denis suburb, called the attackers “criminals, barbarians. They have sold their soul to hell. This is not freedom. This is not Islam and I hope the French will come out united at the end of this.”

The Grand Mosque of Paris issued a statement shortly after the attacks, saying its community was “shocked” and “horrified” by the violence. “This barbaric act … is an attack against democracy and press freedom … We call the Muslim community to exercise the utmost vigilance against possible manipulations from groups referred to as extremists of any kind.”

The Very Rev. Lucinda Laird, dean of the American Cathedral in Paris, said everyone was in shock and grief following the shootings but that the most important thing to do right now is to pray. “Pray for the victims and their families. Pray for peace and justice, here and around the world. Pray for this city, that the perpetrators may be found and stopped, and for an end to this hatred and violence,” she wrote in a letter to the cathedral community. “And most especially, please pray for those whose hatred is so overwhelming that this kind of action is possible. Pray that we may not react with hatred ourselves.”

The World Council of Churches acting General Secretary Georges Lemopoulos said the assault was an “attack on human life, human dignity and the human rights of all … Together with all people of true faith and good will, we pray for the victims and their families, for the perpetrators to be brought to justice, for the extremist ideology that inspired this attack to be extinguished, and that justified outrage may not lead to reprisals against Muslims or fuel anti-Islamic sentiment.”

Obama described the shootings as “cowardly evil attacks.” He promised to help France in its efforts to pursue the terrorists, to “hunt down and bring the perpetrators of this specific act to justice, and to roll up the networks that help to advance these kinds of plots … The fact that this was an attack on journalists, attack on our free press, also underscores the degree to which these terrorists fear freedom of speech and freedom of the press.”

The two suspects still at large have been named as brothers Cherif and Said Kouachi and are said to be “armed and dangerous.” France has declared Jan. 8 as a national day of mourning for the victims of the attack.