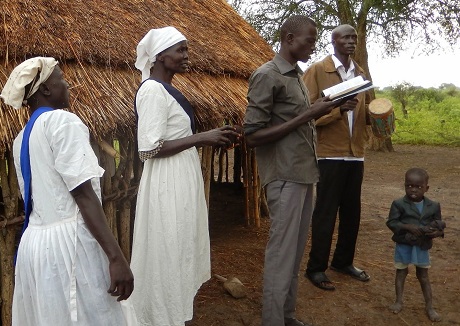 Displaced Christians are helping to plant more churches, and refugee Christians from different tribes are worshiping together to make a point about unity. Photo: Anglican Church of Ethiopia

[Anglican Communion News Service] The Anglican Church in Ethiopia is determined to continue growing despite the numerous challenges including limited financial resources, the impact of conflict in neighboring countries and the generally “restrictive environment” in which it operates.

The bishop is based in the Gambela Region of Ethiopia, most of which is at a low elevation and prone to flooding. It is also host to three UNHCR camps, sheltering more than 18,000 refugees mainly from neighboring countries.

Refugee churches a witness
Despite the overwhelming numbers of refugees in the country, LeMarquand expressed his optimism for the church there. He said, “The churches in the refugee camps in this country are thriving.

“One camp had people from four different ethnic groups: Anuak, Nuer, Dinka and Murle,” he explained. “When I met with representatives of the church, they made it clear that they didn’t want separate churches because they wanted to send a message to people of South Sudan, that they can live together and not have to fight.”

The U.N. refugee agency UNHCR recently announced that Ethiopia had overtaken Kenya to become the largest refugee-hosting country in Africa, sheltering more that 600,000 refugees as of the end of July.

Churches with no name
LeMaquarnd also talked about the efforts the church there is putting in place to reach the people in far-flung areas. He recounted his experiences visiting two small Nuer-speaking village churches in Ethiopia.

“Neither congregations had a building or name, just a tree to worship under. Names are only given to churches when the bishop visits,” he said. We dedicated the first church St Martha’s Anglican Church and the other Holy Trinity Anglican Church. Both congregations are small, but each has had a long, faithful and enthusiastic ministry in their area.

“Bethlehem Anglican Church is a Anuak-speaking congregation that we also visited. It is less than a year old and has no full time pastor,” he reported. “But due to their good lay leadership and hard work, they have managed to build a new church building for their town and also planted several new congregations in the surrounding villages within the year.”

Call for prayer, help
A recent statement from the Intergovernmental Authority on Development (IGAD), an East African organization that seeks peace and prosperity for its members, recently highlighted the plight of the people in the Horn of Africa region of the continent.

“The drought, violence and conflict have caused food shortages in Somalia and South Sudan,” it noted. LeMarquand responded to this by encouraging Christian leaders world over to “please ask your people to pray that God might intervene.”

Reports indicate that about 3.9 million are severely food insecure, with 1.2 million already at the risk of famine if violence continues. Over 50,000 children are also at a risk of dying from starvation.

The Episcopal Area of the Horn of Africa includes the four countries of Eritrea, Djibouti, Somalia and Ethiopia with the majority of Anglican churches being in the western part of Ethiopia. With the on-going conflict in South Sudan, the church there cannot avoid it but deal with some of the war-effect including the influx of refugees.