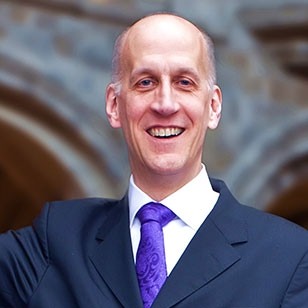 Since 2009, Jeffrey Smith has served on the organ and church music faculty of Indiana University Jacobs School of Music. Based in London, he has served as organist to its oldest parish church, St Bartholomew-the-Great. He was previously Canon Director of Music at Grace Cathedral in San Francisco, where he conducted its Choir of Men and Boys in an extensive liturgical program, devised tours and recordings, and directed a weekly concert series. Smith was Music Director at Saint Paul’s Parish, K Street, in Washington D.C. from 1992 to 2004.

Before his time in Washington, D.C., Jeffrey Smith was the organist-choirmaster of Christ Church Cathedral in Lexington, Kentucky.

As a commentator on church music, Dr. Smith has been heard on both NPR and BBC Radio. His choral and organ disks on the Pro Organo label have been critically praised. He is also active as a guest choral conductor, workshop leader, and recitalist.

Dr. Smith will plan and oversee all music ministries of the parish during the active recruitment of a permanent director. He will work with other parish musicians in recruiting, maintaining, and conducting the adult choir, give oversight to C3, the Cranbrook Ringers, children’s choirs, and other ensembles at scheduled worship services and other performances. He will also be working with members of the parish to establish a program of chorister training and liturgical singing, along the lines of Royal School of Church Music model and/or school-affiliated models.

Dr. Smith grew up in Grand Rapids, Michigan, and currently lives with his family in London, U.K., where his wife works as a journalist and his son is a chorister at Westminster Abbey. His ministry at Christ Church Cranbrook will begin on August 1 and continue until June 30, 2015.

Smith replaces John Repulski, a well-known musician throughout the region. Repulski has accepted an exciting opportunity in a joint position as Director of Music/Music Missioner at Emmanuel Episcopal Church in Baltimore, Maryland.