[Episcopal News Service – Bogotá, Colombia] What began as an English-speaking chapel where British, Canadian and U.S. diplomats and expatriates gathered in the early to mid-20th century when Roman Catholicism was the state religion has become, over the last half century, the Colombian Episcopal Church.

“Today we celebrate 50 years of community life … you are the support of this family, the family that is the fruit of the seed planted by those who came before us,” said Diocese of Colombia Bishop Francisco Duque Gomez during his diocesan convention address at St. Paul’s Cathedral in Bogotá in late May.

Like the other dioceses of Province IX, Colombia is working toward financial self-sustainability while balancing growth.

In 1963, the Diocese of Colombia split from the Diocese of Panama to form its own missionary district. A half century later, the diocese is a nationwide church with 35 parishes and missions, present in urban and rural areas covering 439,000 square miles of mountain, rainforest and tropical plains regions.

To sustain and advance its ministry and mission to meet the growing spiritual, social and humanitarian needs in the communities it serves, the church needs permanent infrastructure and more full-time clergy, Duque said later explained in a conversation in his office after the convention.

“There’s a need for child-care and development programs and elder-care programs and after-school programs for children of working parents and single mothers … as well as caring for displaced people, and for this we need a space,” said Duque.

Twenty of the 35 parishes and missions have church buildings; others meet in house churches. There are six full-time priests out of 36 priests, deacons and lay evangelists. Most clergy are bi-vocational professionals with careers in law, education, business and administration; others are retired police officers and government workers.

Colombia is a middle-income country, but 33 percent of its 47.7 million people live at or below the poverty line. It is the second most populous country in South America after Brazil, and the fourth largest geographically.

Most Colombians live in urban areas: Bogota, Medellin, Cali, Cartagena. Many have fled violence associated with the country’s ongoing 50-year civil war and narcotics trafficking. The violence displaced 4.7 million people, and close to half a million have become refugees. 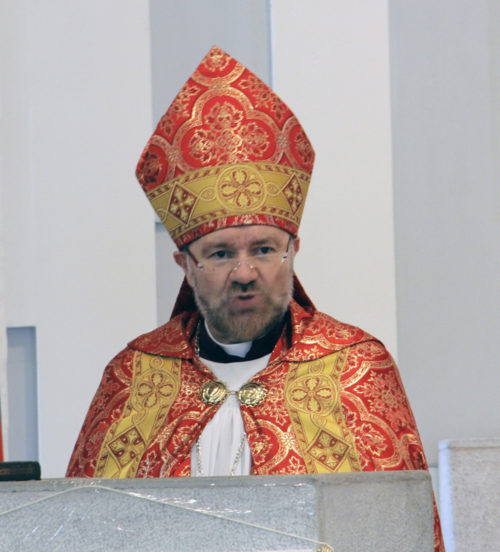 Under Duque’s leadership, the diocese has developed social programs that include micro-finance, preschools, services for the elderly and various programs for poor and displaced Colombians. These include Trinity Foundation in Cali, which runs a micro-finance program; a feeding program supporting the elderly; and a program that provides services to 70 indigenous children, supported by Episcopal Relief & Development.

Other Bogotá-based missions include Holy Spirit Mission, which provides space for a World Health Organization-supported program to empower single mothers and homeless women and help them acquire education and health care. Divine Savior Mission provides shelter and meals to homeless senior citizens and an after-school program in one of the city’s poorest neighborhoods. St. Paul’s Cathedral runs a youth leadership-development program. St. Peter’s Church has a grant-funded evangelism and community-outreach program.

The Rev. Ted J. Gaiser, is the diocese’s director of mission development and an Episcopal Church-appointed missionary now in his second year of service, and has been working to promote mission outreach and sustainability throughout the diocese.

Gaiser, who has a master’s in business administration and a doctorate degree in sociology with an emphasis in social justice, wrote a project-development and management-training program aimed at equipping parishes with the skills to develop well-organized projects and programs, including low-income housing, church-owned schools, elder housing and employment opportunities for internally displaced people.

The training, which uses an Asset Based Community Development Approach to evaluate existing resources, and includes project analysis, funding and budgeting, has been conducted throughout the diocese to help move it toward its 2021 goal of achieving financial self-sustainability.

Also, Colforpaz, a nonprofit organization has been founded to support the diocese’s mission and sustainability.

The diocese in recent years has established a presence in Cúcuta along the northern border with Venezuela, where refugees fleeing Colombia’s civil war have crossed into Venezuela, and where Venezuelans fleeing violence and social and economic troubles in their own country now cross into Colombia seeking refuge. And in Pasto, a city northeast of the border with Ecuador en route to Túlcan, the United Nations High Commissioner of Refugees operates a field office for asylum seekers.

“In these two important cities construction is underway on our own temples that would let us develop permanent [social] work and a stable pastoral presence,” said Duque.

Roman Catholicism was the official state religion until Colombia’s Constitution established protection for religious freedom in 1991. Now, 93 percent of the population is Christian, with more than 80 percent of them identified as Roman Catholics.

Most of the priests and deacons active in the diocese attended Roman Catholic seminaries and were priests in the Roman Catholic Church before joining the Episcopal Church, and many see the priesthood as a “vocational call” rather than a career, said Gaiser.

An active congregation, including outreach, is a canonical requirement to be priested in the diocese. The “process,” Gaiser explained, works like this: Aspirants, with the support of a priest or a deacon in their area, begin to build a worship community. Ordination to the diaconate and a long period of “Anglicanization” follows before ordination to the priesthood.

Anglican-Episcopal formation goes beyond the clergy. In recent years, the diocese has committed “to teach, baptize and nurture new believes,” the second of the Five Marks of Mission, and the Rev. Alberto Pinzón, of St. Paul’s Church in Bogotá, is working to implement a diocesan-wide evangelism program to invite, inspire and transform individuals, and building up parishes.

“They [people joining the Episcopal Church] need to understand what it means to be Anglican,” said Duque.

Given the country’s geography and the costs associated with meeting, the clergy, laity and diocesan leadership typically meet twice annually. Besides providing a place for elections and budget discussions, the convention provides time for workshops focused on continuing education and leadership development.

The most recent diocesan convention included workshops on gender and on the full inclusion of not only LGBT people but also displaced and other marginalized people; church history; and self-sustainability.

Bishop Carlos López-Lozano, bishop of the Spanish Reformed Episcopal Church, traveled from Madrid to attend convention. Over two sessions, he gave a history of the church, including the reformed church’s story of sustainability.

For the most part, he said, the Episcopal Church in Spain began as an indigenous church and therefore didn’t receive outside support, with the exception of a period following the Spanish Civil War when the church paid its priests salaries with funds from the World Council of Churches.

“When it ended, the church needed to reorganize things,” said Lopez. “When you have money, you don’t think about self-sustainability.”

It’s important that people in the church understand that the church needs money to carry out its mission, and that in stewardship campaigns everyone be involved, he said. In solidarity, the larger churches help the smaller churches with their mission.

“It’s about changing minds about what we are capable of doing,” said Lopez.

Duque and the other bishops of Province IX have come to realize that prevailing regional circumstances call for new direction, he said. “In virtue of that, we have decided to adopt an integral sustainable-development strategy in each one of our dioceses.” 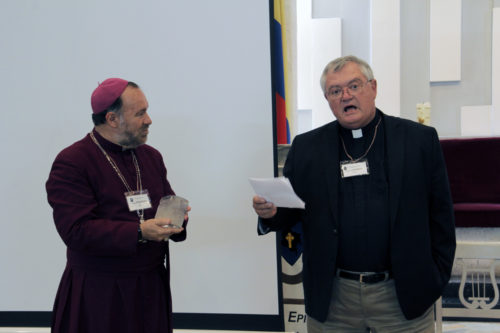 The Episcopal Church historically has supported the Province IX churches through a block-grant program, which provides the dioceses with operating funds amounting to $2.9 million in the current triennium. Colombia receives $127,400 annually toward its $241,250 budget.

During a July 2013 meeting of lay and ordained leaders of Province IX and Episcopal Church Center staff, the consensus was that “the current relationship between the dioceses of Province IX and the rest of the Episcopal Church is influenced by the nature of the historical block grants that establish a relationship of dependency. This is not spiritually healthy, either for the ‘dependent’ or the ‘depended upon,’” according to a document that was released following the meeting. The document created by the Mark 2 Mission group was born of a longer conversation that began in earnest in March 2011 with a conference in Tela, Honduras.

In February, on the recommendation of the Second Mark of Mission working group (a group convened by the staff of the Domestic and Foreign Missionary Society), the Episcopal Church’s Executive Council agreed to an 18-year plan for “self-sufficiency” to move to sustainable mission and ministry in Province IX.

The other Province IX churches are, in South America, Ecuador Central, Ecuador Litoral, and Venezuela; in the Caribbean, the Dominican Republic and Puerto Rico; and in Central America, Honduras.