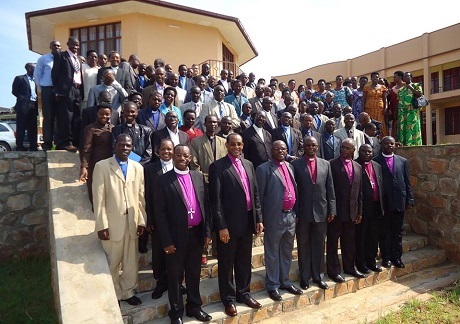 The church is doing all it can to encourage university-level education in Burundi. Photo: The Anglican Church of Burundi

[Anglican Communion News Service] A new Christian university planned by Anglicans in Burundi aims to promote inter-tribal harmony across the nation through the teaching of the Gospel.

Burundi is one of the five poorest countries in the world with one of the lowest per capita GDPs of any nation in the world. The country has suffered from warfare, corruption and poor access to education.

The country’s Anglican Church is hoping to address some of that by building a new university that will teach students how to think for themselves and to see what God has to say about peace, justice and reconciliation.

In an interview with ACNS, the university’s vice chancellor, the Rev. Canon Donald Werner, said the plan was to provide students with a university-level education and encourage them to bring that learning back to their towns and villages.

“The church needs educated Christians who can communicate the ethical teaching of Jesus Christ,” he said. “We encourage children in education and in the practice of thinking for themselves rather than blindly following a strong personality in whatever they say.”

The Anglican Church is complementing the government’s effort to improve the education sector in a country still suffering from years of civil war. The conflict was the result of long-standing ethnic divisions between the Hutu and the Tutsi tribes in the country.

The university is also a response to a growing desire for education among local people, which has put pressure on existing facilities and, in some cases, has resulted in the shortage of education facilities and study materials.

For many years, the Anglican Church of Burundi has wanted to provide a university-level course in pastoral theology as part of the preparation for lay or ordained ministry in the country.

“The university has the full strong support of all the diocesan bishops and the archbishop of Burundi,” the vice chancellor said. “But we are also asking for prayer and financial support from the wider world.

“While I am keen to see the Church of Burundi owning the venture by giving as much financial support as possible, it would be unrealistic to expect the Church to contribute more than a small fraction of the cost,” said Werner.

To show its commitment to the success of this project, however, the Diocese of Bujumbura has donated the old cathedral building which is in a prime site in the center of the capital city. It will be converted into three lecture rooms, library, offices and a worship area.

“We are starting small, with just a theology faculty, and then we will add other faculties,” said the vice chancellor. “This was the way taken by what is now regarded as the best university in Burundi, that now has thousands of students and many faculties.”

Werner said he was also encouraged by the fact that six lecturers from England have offered to visit the country to teach some units of the university’s syllabus.

The Burundi Christian University (BCU) is scheduled to open in September this year.