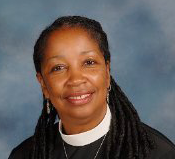 “We are more than fortunate to find someone who can so readily and faithfully build upon the legacy of hope that Michael Jackson and Alfreda Houston, who previously led the agency, have given to the people on Galveston Island,” said the Rt. Rev. Jeff W. Fisher, board chair.

Born and raised in the Mississippi Delta, Brown grew up during the Civil Rights Movement of the 1960s. “This gave me a unique experience of the under-served and working poor and an abiding appreciation for their resilience,” Brown said.

Brown received a BS in medical technology from Xavier University in New Orleans and worked for more than two decades at St. Paul University Hospital in Dallas where she also served as chair of the St. Paul’s Credit Union. She earned a master’s of theological studies at Perkins School of Theology at Southern Methodist University in Dallas and embarked on a clinical residency program, training as a hospital chaplain. She served as a palliative care chaplain in hospice and hospital settings for seven years, prior to entering the ordination process in the Episcopal Diocese of Dallas. Brown attended Seminary of the Southwest and was ordained in 2010, serving at the Episcopal Church of the Annunciation in Lewisville, Texas until her appointment to St. Vincent’s House.

“The ongoing ministry of this place is phenomenal,” Brown said. “Here, we learn that hope is an action. As my predecessor, Michael Jackson, would say, ‘St. Vincent’s hopes (not helps) its friends on Galveston Island into new life.’  To me, HOPE means never giving up and never giving in. I am honored to walk with the ones who are under-served and usually ignored.”

“St. Vincent’s House has fostered health and education for all of God’s children who have come needing hope and a caring hand,” Bishop Fisher said, adding the new appointment promises “renewed hope” and “a new day dawning” for St. Vincent’s and the under-served population of Galveston.

SVH offers low-cost child care and pre-school programs, a free clinic, emergency assistance and referrals, a food pantry and many other community outreach programs for the working poor of Galveston.