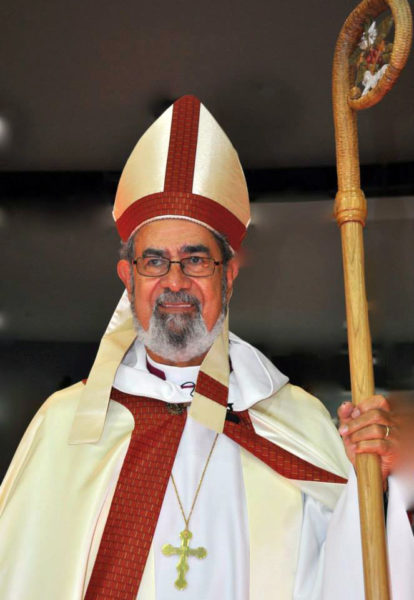 [Episcopal News Service] The Rt. Rev. Wilfrido Ramos Orench was installed as provisional bishop of the Diocese of Puerto Rico on March 28 at the Universidad Polytécnica de Puerto Rico in Hato Rey. He is the seventh bishop of Puerto Rico.

Ramos replaces Bishop David Alvarez, who served as the diocesan bishop in the Diocese of Puerto Rico since 1989.

During the installation, Ramos received a pectoral cross from Yadira Torres, president of the diocese’s Standing Committee. The cross, used by Bishop James Van Buren in 1901, has been handed to all diocesan bishops, Torres said.

“I want to thank everyone for your support and your prayers. Let us together write a new page in the history of our diocese,” said Ramos during the installation.

The diocese’s Standing Committee postponed and later canceled an election to replace Alvarez, who reached retirement age on Sept. 7, 2013.

Charges were made against Alvarez in August and September of 2013.

An accord regarding certain alleged violations of the disciplinary canons was reached between the presiding bishop and Alvarez; as a result of the agreed-upon accord, he is suspended from all episcopal duties until Oct. 31, 2014, said Bishop Clay Matthews, the Episcopal Church’s bishop for pastoral development, in a statement issued by the Episcopal Church’s Office of Public Affairs.

Alvarez resigned on the mandatory retirement date of Nov. 1, 2013.

The accord with Alvarez says “alleged” because there were three complaints, one of which could not be refuted. Alvarez failed to implement Title IV, the ecclesiastical disciplinary canon adopted in 2009, to be put in affect in 2011, said Matthews, in a telephone call with ENS.

Alvarez disputed the other two charges, but rather than extend the investigation process, the presiding bishop and Alvarez settled on an accord, which was not disputed, said Matthews, adding that the allegations are not public per the confidentiality requirements of Title IV.

“In effect he’s suspended from all Episcopal ministries from Nov. 1, 2013, to Oct. 31, 2014,” said Matthews, adding that the accord is not based on something that has to do with “immorality.”

In the meantime, the diocese in convention (and in consultation with the presiding bishop’s office) elected Ramos as the bishop provisional, “until such time as they are ready to have an election. And we’re assuming that may be three years from now,” said Matthews, adding that there is some disagreement in the diocese regarding whether an election should be held now, or whether the diocese should wait.