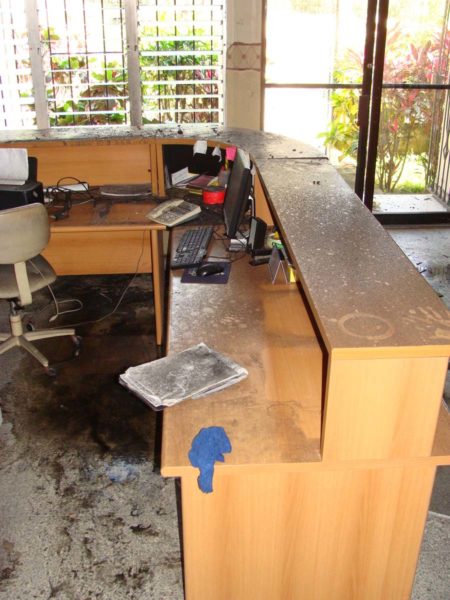 The fire started in the reception area, damaging computers and other office equipment.

A fire broke out over night Feb. 10 at the Episcopal Diocese of Honduras Diocesan Center in San Pedro Sula when an air conditioner unit exploded in the reception area. The damage was contained in the area, but the roof, computers and office equipment will have to be replaced, said the Rev. Canon Lura Kaval, an Episcopal Church missionary and the diocese’s canon for development.

At 2:30 a.m., Diocese of Honduras Bishop Lloyd Allen received a phone call from the night watchman at the Diocesan Center in San Pedro Sula indicating that a wall air conditioner had exploded and the building was on fire; the entrance to the building and roof of the wood structure were destroyed and the front door was demolished by firefighters.

The reception area where the bishop’s administrative assistant works suffered extensive smoke damage; the telephone, computer and copier were destroyed by water damage. In addition to the reception area, the adjoining conference room suffered slight water damage, but the damage was contained in those two areas. 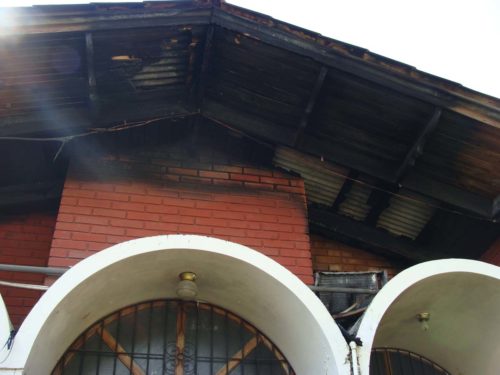 The damage mainly was contained to the reception area and a conference room. The building, but not its contents, is insured.

Further damage to computers and telephone equipment that may have resulted from an electrical surge cannot be assessed until the electricity is turned back on. The electricity remains off in both the Diocesan Center, the Cathedral El Buen Pastor and the adjoining school. Electricity is expected to return on Feb. 11. The building itself, but not its contents, is insured, Kaval said.

“It is a sad day for the diocese. Some days it’s two steps forward and then one step back.  But recently it had been suggested that as we move toward self-sufficiency that we update the diocesan reception area to include some glass shelving and display cases to highlight Episcopal crafters and entrepreneurs who are selling beautiful jewelry and tasty coffee,” said Kaval.  “Maybe we weren’t working as fast as God wanted us to?  In all things God works for good.”