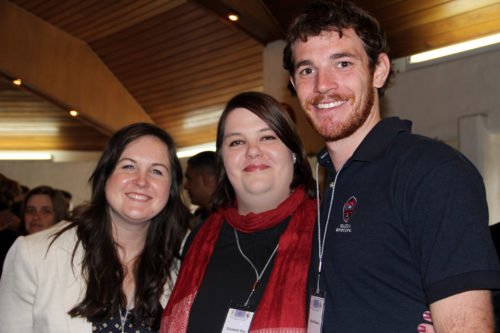 “We do make great efforts to be on call and available 24/7 for all our missionaries,” said the Rev. David Copley, mission personnel and global partnerships officer.

Most recently, on Dec. 20 in the wake of the outbreak of violence in South Sudan, Copley assisted in the evacuation of Ed Eastman and Noah Hillerbrand, two missionaries who were serving in the Diocese of Renk in the Episcopal Church of Sudan and South Sudan.

“After the fighting started it was decided we needed to evacuate immediately, as the one available Medair flight was only available the next day, then no more flights,” said Eastman in an e-mail to ENS from Tanzania. “David Copley got in touch with me by phone and informed me of this. It was 11 p.m. his time and he was making the arrangements from his home because of the emergency situation [thank you, David].”

Fighting erupted in Juba, the nation’s capital, on Dec. 15 following a political dispute. Renk is in northeastern South Sudan in Upper Nile State near the border of Sudan, and though it remained quiet in the first days and weeks of violence, the fighting has spread to the upper Nile region.

The U.S. Embassy in South Sudan began evacuating staff in December and further reduced its staff in early January, when it also urged all U.S. citizens to leave the country.

The Episcopal Church’s Mission Department doesn’t operate an emergency relief and development organization and doesn’t send missionaries to active war zones. That said, there have been cases where missionaries have been evacuated from countries following natural and other disasters, political and social unrest and armed conflict.

“We don’t sent people into insecure areas, normally, but the reality is you can’t guarantee any place as perfectly safe,” Copley said.

When protests erupted in Tahrir Square during the 2011 Egyptian Revolution against former President Hosni Mubarak, the Rev. Paul Gorden-Chandler, a missionary, was serving as rector of St. John the Baptist Church in Cairo.

The Episcopal Church has 60 adult and Young Adult Service Corps missionaries serving in more than 20 countries throughout the Anglican Communion, from Haiti to Brazil to Hong Kong to South Africa to the Philippines, in developing and developed nations.

In addition to pastoral care, regular check-ins, logistical and other support provided by the Mission Department, missionaries receive health coverage and evacuation insurance.

Missionaries, ordained and lay, some professionals with years of experience, and others having recently graduated college, serve in a variety of roles, priests, teachers, doctors, nurses, web designers, administrators, accountants, farmers, welders, musicians.

Often times, people will say “I can’t be a missionary because I’m not a doctor,” said Copley, officer for mission personnel and global partnerships, adding that part of his job is to facilitate discernment. “Everyone has gifts.

“Sometimes is just convincing people that a ministry of presence is as important as a technical skill.”

Serving as an adult or Young Adult Missionary of the Episcopal Church serves not only to strengthen local ministries and programs, but also connects Episcopalians to the large, 85 million-member Anglican Communion, reinforcing common bonds. The church sends missionaries to serve and assist in programs that fit with the strategic priorities of a province or diocese, and those that strengthen new or existing companion relationships.

For instance, the late Michael Tedrick, a missionary from the Diocese of California, served in the Anglican Diocese of Curitiba in Brazil facilitating the companion diocese relationship, added Elizabeth Boe, the church’s officer for global networking.

Before deploying a missionary, the church’s Mission Department staff conducts a broad assessment of the placement, including safety and security; the availability of adequate accommodations; the existence of meaningful work; and especially in the case of young adults, the presence of a mentor, said Copley.

The Episcopal Church can send missionaries, “just about anywhere, that said, we do look at places where we have an exit strategy,” said Copley, adding that even though mission groups regularly visit the Republic of the Congo, it’s not currently a country to which the church would send missionaries.

The Diocese of Renk, given its isolated location, isn’t a spot where the church typically sends missionaries either, said Copley, but Eastman and Hillerbrand both had planned to go anyway so the Mission Department “adopted” the missionaries.

Eastman, a member of Church of the Holy Family in Chapel Hill, North Carolina, arrived in Renk on Dec. 10 and planned to begin spearheading construction of a fence on a 25-acre farm belonging to the diocese, which is part of the Episcopal Church of Sudan and South Sudan.

“The materials were purchased in Juba and put on a barge to Renk just before the fighting erupted,” said Eastman, adding that the farm is critical in providing food for students and staff of Renk Theological College and income for the diocese.

“We were hoping the fighting would get under control and we could go back, instead it has gotten much, much worse,” said Eastman, who’d planned to return to the U.S. this week. “I have been invited back to South Sudan by Bishop Joseph [Atem] when peace occurs. This may not be in the near future.”