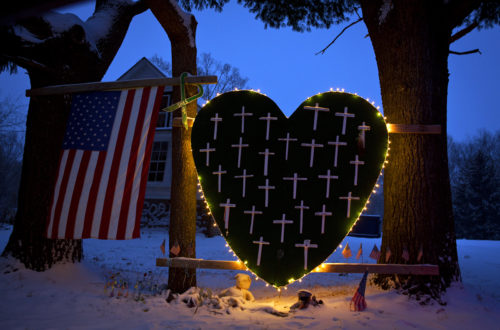 A heart that bears 26 crosses for each victim is surrounded by lights in the Sandy Hook portion of Newtown, Connecticut, Dec. 14, 2013. Photo: REUTERS/Carlo Allegri

[Episcopal News Service] One year after the shooting at a Connecticut elementary school where 20 children and six adults were killed, Episcopalians across the nation participated in memorial services and spoke to the need for tighter gun control.

At Trinity Episcopal Church in Newtown, Connecticut, about two miles from Sandy Hook Elementary School, the site of the Dec. 14, 2012 shooting, the community was joined by Connecticut bishops suffragan Laura J. Ahrens and James E. Curry for a two-hour memorial serving commemorating the victims.

At St. Paul’s Episcopal Church in Fayetteville, Arkansas, the grandfather of one of the child victims rang the bells 20 times, once for each child victim.

Adam Lanza, 20, who had a history of mental and emotional problems, killed his mother at their Newtown home one year ago before driving to the elementary school, where he opened fire on the other victims and then committed suicide. The shooting, which devastated the nation, sparked a conversation on stricter gun control.

President Barack Obama and first lady Michelle Obama on Dec. 14 lit at candle for each of the 26 victims at the school, and the president called for stricter gun control and support for mental health treatment.

“As a nation, we can’t stop every act of violence. We can’t heal every troubled mind. But if we want to live in a country where we can go to work, send our kids to school, and walk our streets free from fear, we have to keep trying. We have to keep caring. We have to treat every child like they’re our child. Like those in Sandy Hook, we must choose love. And together, we must make a change,” said Obama in his weekly address.

In Salt Lake City, Episcopal Diocese of Utah Bishop Scott Hayashi said the nation’s wounds remained open and that Americans would not be lulled into thinking that such a tragedy won’t happen again.

“You and I, for the sake of all people, must continue to be outraged,” Hayashi told an audience at Salt Lake City’s First Unitarian Church, according to the Salt Lake Tribune. “If we lose that, we will lose the energy to move forward to make the changes that need to be made.”

One day earlier, on Dec. 13, in Littleton, Colorado, an 18-year-old gunman shot and critically wounded a 17-year-old high-school classmate before killing himself. The gunman went to the high school searching for the head of speech and debate team, who’d recently kicked him off the team, according to news reports.

On Dec. 14, the bishops of the Diocese of Virginia sent the following message to the diocese, “Today, we remember the children, men and women who lost their lives at the Sandy Hook Elementary School shooting one year ago. We join in prayer with others from across the country and across the globe, for the victims and families of Sandy Hook and of so many other gun-related tragedies. We pray, too, for our country, as we continue to grapple with issues surrounding gun violence and safety – issues raised again by yesterday’s shootings in a suburban Denver school.”

Also on Dec. 14, gun control advocates gathered at the Cathedral of the Incarnation in Baltimore, Maryland, to commemorate the Sandy Hook victims and “to express their displeasure” with the federal government and individual states for failing to pass stricter gun control laws.

Washington National Cathedral on Dec. 12 held a national vigil for all victims of gun violence honoring all those who have been affected by the rampant gun violence in the United States and exploring the role that people of faith can have in healing victimized communities and push for justice and changes in law that can protect against further gun deaths.

More than 800 people, including Connecticut Bishop Ian T. Douglas, interfaith gun control activists, survivors and victim’s families, attended the service.  The Very Rev. Gary Hall, dean of the cathedral, has been an outspoken advocate for stricter gun control in the wake of the Connecticut and other shootings.

On Dec. 15, Hall used his sermon to reaffirm his stance.

“A year ago, I stood in the pulpit and declared my own and this cathedral’s resolve to stand with and for the victims of gun violence and to use our energies to mobilize the faith community to pressure our legislators for action to curb the epidemic of deaths brought about by guns in America,” he said. “In the phrase that will no doubt be the opening line of my obituary, I said, ‘The gun lobby is no match for the cross lobby.’”

Hall noted that one year later “pretty close to nothing has happened,” pointing out that the Centers for Disease Control and Prevention has reported that an additional 32,000 people have died from gun violence in the United States since the Sandy Hook shootings, including 12 people who died in the Washington Navy Yard shootings in September 2013.

“There has been almost no legislative action in response to these deaths,” he said.

“What else did we think we had a right to expect? Nothing has happened in a year partially because we have not cared enough to make something happen. The passion is all on one side in the gun violence debate. Oh, sure, we care every time there is a tragedy. But we quickly lose interest and turn our attention to other things. We need, my friends, to do better. We need, as the community that lives out the life and promise of Jesus in the world, to be the people bringing good news to a nation and world in the grips of a death-dealing addiction to violence and guns,” Hall continued.

A Facebook page, Episcopalians Against Gun Violence, has been created to share the work of bishops, clergy and lay Episcopalians working to curb gun violence.

“Twenty young children and six educators were slaughtered by 154 bullets – fired in just five minutes. This obscenity has to stop,” said the Liles, who took part in the national vigil for all victims of gun violence at Washington National Cathedral on Dec. 12. “I felt a strong sense of commitment during the cathedral vigil to work even harder to persuade the U.S. Congress to finally adopt meaningful and sensible gun control legislation when they return to Washington in January.”