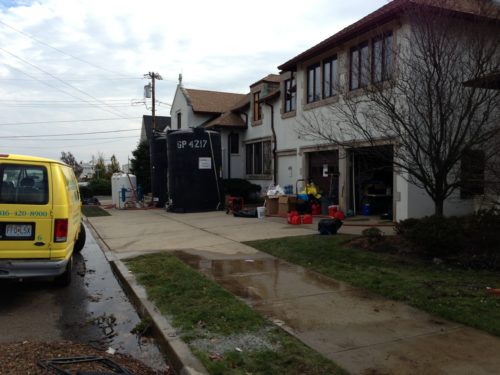 “You make known to me the path of life; in your presence there is fullness of joy”
Psalm 16:11

[Episcopal News Service] What a year it has been since Hurricane Sandy. Who could have foreseen the devastation to our church and the larger community that would occur on Oct.29, 2012?

The most damaging aspect to St. George’s by-the-River in Rumson, New Jersey was an oil spill in the church basements that occurred when three tanks were dislodged and tipped over by the storm. As a result, St. George’s infrastructure was destroyed, including all wiring, cables, heating and air conditioning ducts, phone lines and more. In addition, we were left with a biohazard that needed immediate remediation as spilled oil began to leach into the surrounding soil and water. Thanks to the hospitality of Holy Trinity Lutheran Church in Red Bank, New Jersey, we had a place for Sunday worship for the next six weeks until we were able to get back into our own church.

One thing we learned is how much St. George’s parishioners love their church. On account of their generous donation of time, talent and treasure, and on account of our excellent Church Insurance Co., we were able to restore much of what was destroyed and were able to get the oil cleaned up and hauled away.

Our restoration has not been limited to our own church’s physical plant.  Superstorm Sandy made it clear that we need to have a better connection with our immediate neighbors who suffered greatly. Many of them have still not been able to return to their homes because of damage. Accordingly, we have created opportunities to get to know our neighbors, to physically help them rebuild and have increased our outreach funding to serve them.

Unsurprisingly, we also have a heightened awareness of the environmental dangers of heating oil and have completed our conversion from oil to gas. The fact that the sea continues to rise poses another environmental challenge that we have yet to address.

Hurricane Sandy also taught us about the beauty of being part of the Anglican Communion. Shortly after the storm, Deacon Karen Chavez from St. John’s Episcopal Church, Corona, California contacted me to tell me that her church would be raising money for us during Advent. It has been moving and humbling to be on the receiving end of help from other churches. We, in turn “paid this generosity forward” by assisting two Lutheran churches struggling as a result of the storm. (We deemed it important to help our Lutheran brothers and sisters since they were the ones who took us in while we were temporarily homeless).

Last but not least, we learned that, as Psalm 16 says, God does indeed “make known to us the path of life” even in very difficult times. Through God’s Spirit and by God’s grace we were enabled to survive Hurricane Sandy and continue to learn how to better serve others.