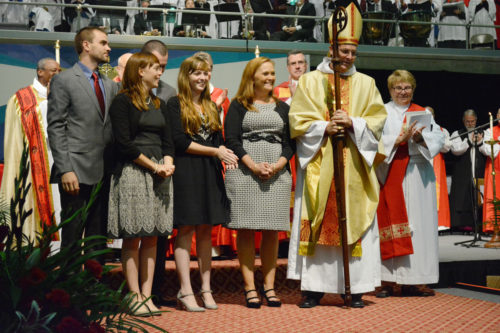 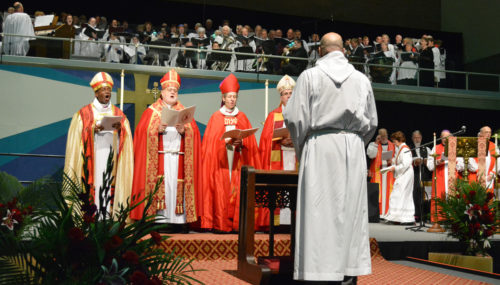 An estimated 1,000 people filled Van Noord Arena at Calvin College in Grand Rapids as Presiding Bishop Katharine Jefferts Schori ordained and consecrated Hougland as the 1077th bishop in the Episcopal Church succession. Co-consecrators were the Rt. Rev. Stacy Sauls, chief operating officer of the Episcopal Church, Bishop Donald Kreiss of the Southeast Michigan Synod of the Evangelical Lutheran Church in America, and Bishop Michael Curry of North Carolina, who preached a message about witness and discipleship. In addition to those in attendance, 569 people watched the event online through the new diocesan website.

Plans for the consecration service began 16 months ago, and was led by an all-volunteer diocesan transition team.

Hougland’s vestments and the symbols of his office were gifted and presented by his parents, Mr. and Mrs. Whayne Hougland, Sr., the people of the Diocese of Western Michigan, St. Mark’s Church in Coldwater, and the bishops of the other three Episcopal dioceses in Michigan. The cope, miter, chasuble and stole were made by Wippells in the United Kingdom. 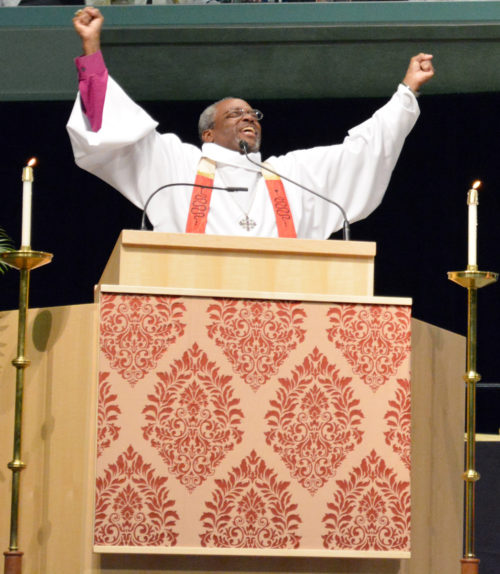 Bishop Michael Curry of North Carolina preaches about witness and discipleship. Curry was Hougland’s bishop when he served as rector of St. Luke’s in Salisbury, North Carolina. Photo: Karmel Puzzuoli

The cope was designed by Anne Davidson, consecration co-chair. The diocesan crozier, which dates back to 1915, and bishop’s prayer book, which belonged to the first bishop of Western Michigan, were presented by Gepert.

The presiding bishop then presented the new bishop with a Bible, charging him to “Feed the flock of Christ committed to your charge, guard and defend them in his truth, and be a faithful steward of his holy word and sacraments.”

Hougland arrives in Western Michigan after serving as rector of St. Luke’s Episcopal Church in Salisbury, North Carolina, since 2005, and previously as canon evangelist at Christ Church Cathedral in Lexington, Kentucky. Prior to his ordination to the priesthood in 1998, he worked for Lexmark International, also in Lexington.

He is married to Dana Lynne Hougland, an educator and autism specialist. They have two grown daughters.

The Diocese of Western Michigan oversees all Episcopal parishes in the western half of the Lower Peninsula, and covers a nearly 300-mile area north-to-south. All parishes from Petoskey to Niles participated in the event.

The diocese’s 8,000 members worship in 55 parish churches, two mission churches and four seasonal chapels. The diocese has undergone some major changes in the past 12 years under Gepert’s leadership, including a complete revision of the diocesan canons, the governing laws of the church, and the sale of the cathedral in Kalamazoo. It has also significantly improved its financial health to support its various ministries.

“[Bishop Gepert] has left a nice, clean slate for us to begin afresh,” said Hougland in his first video message to the diocese in July. “I hope you will honor him for the work that he’s done. He has worked really hard and he has loved you well.”

“The Episcopal Church has a real opportunity to look at how we do church and how we might do it looking forward,” said Hougland. “We are perfectly situated with our rich traditions, our history, our great resources, and with all the creativity, skills and talents we have, to really feed people who are starving in the world. I think the Episcopal Church is the right place to be. We must work to pull people together instead of allowing the world to pull us apart. There is great hope and joy for me in this new office, and to see what the Lord is going to do for us moving forward.”

— Karmel Puzzuoli is communications assistant to the bishop of the Episcopal Diocese of Western Michigan.