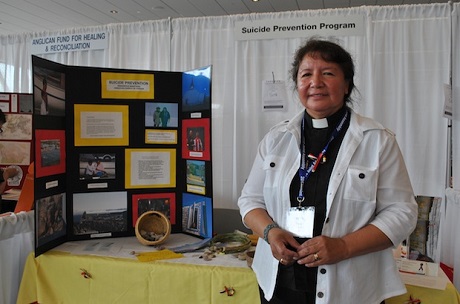 The Rev. Nancy Bruyere, a non-stipendiary priest from the Diocese of Keewatin, has been named suicide prevention coordinator for western Canada and the Arctic. Photo: Marites N Sison/Anglican Journal

[Anglican Journal] In response to the suicide crisis affecting some native communities in western Canada and in the Arctic, the Anglican Church of Canada’s indigenous ministries department has appointed a new suicide prevention coordinator for that region.

The Rev. Nancy Bruyere, a non-stipendiary priest in the Diocese of Keewatin, has been named to the position. Bruyere is associate priest at Christ Church Sagkeeng First Nation in Fort Alexander, and also serves in Little Black River First Nation, Hollow Water First Nation, and Manitgotagan, all in Manitoba.

Bruyere said she thought hard before accepting the position. “A lot of people don’t really like talking about it [suicide]…They think it would cause more young people to take their own lives,” she said in an interview with Anglican Journal.

However, Bruyere said she realized that she could draw on her own personal experience to help people deal with the issue. Bruyere attempted suicide as a child and then again as a young mother at 21. “I can relate to the feelings of hopelessness, depression, shame,” she said in a biography she gave to the Journal.

She grew up in a home “where life was not perfect” and there was “lots of alcohol, fighting, fear and abuse.” This kind of family situation is not uncommon, said Bruyere, particularly in those communities affected by the Indian residential school experience.

“A lot of our people who went to residential schools are talking more and more about their experiences, including the lack of love,” said Bruyere. Many grew up feeling afraid and ashamed of their culture, she added. For instance, they were taught in schools that their dances were evil. “But I learned that when our people danced,” she said, “they were dancing for healing when someone was sick.” Bruyere said she intends to incorporate in her work aspects of her people’s once-denigrated culture.

Suicide and self-inflicted injuries are the top causes of death in Canada for First Nations youth and adults up to age 44, according to a 2003 Health Canada study. Aboriginal youth commit suicide about five to six times more often that non-aboriginal youth; Inuit youth, in particular, commit suicide at 11 times the national average.

While manning the indigenous ministries booth at the recent Anglican-Lutheran Joint Assembly in Ottawa, Bruyere said that bishops and priests came by with stories about recent suicides. “It’s painful to hear about suicide, even with people I don’t know,” she said. One particular area she would like to explore is how to provide ministry to a growing aboriginal community in urban centers.

Bruyere said she feels honored to have been chosen for the job by the Rev. Canon Ginny Doctor, and for the opportunity to work with the Rev. Cynthia Patterson, suicide prevention coordinator for eastern Canada and a deacon in the Diocese of Quebec.

“What really impresses me about Nancy is her pastoral care and her ministry in her community,” says Doctor. ” She works without pay to make sure her people have the spiritual care needed. Our prayer is that we can raise enough resources to have suicide prevention coordinators in every diocese where there are significant Indigenous communities.”

Bruyere described her new ministry as “a blessing from God,” and a “continuing learning life experience about who God is and who we are as aboriginal people in Christ.”

Bruyere is married to the Rev. Richard Bruyere, who, like her, is a non-stipendiary priest in the Diocese of Keewatin. They have four children and 25 grandchildren.