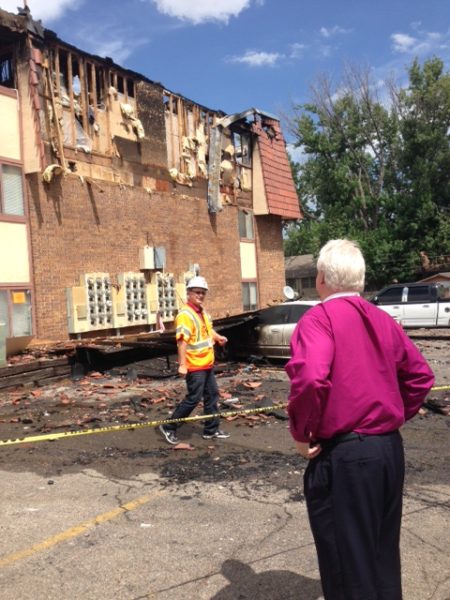 [Diocese of Kansas] Three refugee families from Burma who were beginning to make a new life in the U.S. are trying to adjust to the loss of all their possessions in a two-alarm fire that destroyed their apartments Aug. 27.

Beyond that, they are struggling with a sense of despair, feeling that tragedy has followed them from their war-torn homeland to Wichita, Kansas, the place they now call home.

The families came to this country through a refugee resettlement program of the U.S. government. They were sponsored by Episcopal Migration Ministries and its local Kansas affiliate, the Episcopal Wichita Area Refugee Ministry, known as EWARM. The Kansas agency was formed less than two years ago and began welcoming refugee families in July 2012, providing them with a variety of services to help them adjust to their new lives in the U.S. Two of the families displaced by the fire were the first to be assisted by EWARM, and the third arrived in Wichita just a month ago.

An appeal for funds by Episcopal Diocese of Kansas Bishop Dean E. Wolfe already has started to provide some of the help they will need.

The fire was discovered about 5:30 a.m. by Saw Moe, one of the refugees, who at first attempted to extinguish the blaze but quickly called the emergency services. In spite of minor burns to his hands, he got his family out of the building and began to alert other residents. None of those in the 48 units suffered anything more than minor injuries, but the building is a total loss. Residents reported to various news media that they were able to escape with only the clothes they were wearing.

Six other refugee families live in an adjacent apartment building, and they and other residents were evacuated for much of the day and were able to return home that evening. They now are hosting the eight people in the three families who lost everything.

Aid arrives quickly
Shannon Mahan, EWARM’s executive director, said aid came quickly after the fire was reported. Episcopal and Lutheran volunteers who have been helping the families arrived at the scene within an hour, providing support and comfort. Donations of needed items also started to arrive.

Wolfe surveyed the scene the day after the fire and expressed compassion for all that the families have been through since coming to Kansas.

“The families we have helped resettle from Burma are people with very few possessions who have come at the invitation of our government to start a new life,” said Wolfe. “Many of them lived in refugee camps for long periods of time before being able to come to the United States. Many of them have heroic stories of faith and perseverance. I hope we can show these brothers and sisters who we are and what we value by our generous response to this crisis.”

Episcopal Migration Ministries also was in quick contact, and officials said they were providing support. Deb Stein, EMM director, said a financial contribution was on its way. She called the fire “a very sad event, especially given the hardship and trauma that these families have already endured.” But, she said, “the embrace of the community and the diocese” will be a big help, as well as the fact that “refugees are incredibly resilient.”

Fire conjures up past violence
Mahan said the Red Cross offered what may be some of the most valuable help in the form of crisis intervention mental health specialists. They met with all the affected refugee families on the evening of the fire, to help them cope with memories of the past that had been awakened by this new tragedy.

In Burma, also known as Myanmar, refugees had to flee decades of violence, including the military junta going from village to village, burning down everything in sight and then planting land mines so no one could return home. “They could tell where the troops were by looking for smoke on the horizon,” Mahan said.

Besides dealing with dreadful memories of the life they had fled, Mahan said some of the refugees now talk of feeling cursed. “They feel that the tragedies they felt in Burma now have followed them to this place,” she said. “They feel great grief and a tragic sense of loss. They have worked so hard for what little they had, and now it’s gone.”

What few possessions the refugees were able to bring with them often were family heirlooms and photos, as well as items reflecting their ethnic heritage. Many of the refugees are Karen, one of the dozens of ethnic Burmese groups. They hosted their American friends earlier this year for a celebration of Karen New Year. Mahan said she already has started looking into what she can do to help replace some of those things, such as flags and items of native dress.

Additionally, they have lost all documents that prove they are legal permanent residents of the U.S. EWARM is working with federal agencies to obtain duplicates, and with EMM to see if international documents also can be located.

Saw Moe, the man who discovered the fire, especially is grieving the loss of a video he made last Sept. 1 on the day his son, Joseph, was born, just weeks after his parents arrived in the United States. In it he tells his newborn child how proud he is that the family now lives in America, Mahan said.

Mahan said all but the newest refugees have found jobs, and she is working with their employers to allow them some time off to cope with their loss.

New apartments soon
Mahan said that in the last year EWARM has become adept at gathering what is needed to establish a new refugee family in an apartment, so doing it again for these families shouldn’t take long. Managers at the apartment complex already have arranged for the three displaced families to have new apartments in the remaining building, a fact that Mahan said is key. “They are such a communal people,” she said. “They want to stay together.”

She said the three families are expected to move into their new apartments with basic necessities by Sept. 2.

— Melodie Woerman is director of communications for the Episcopal Diocese of Kansas.