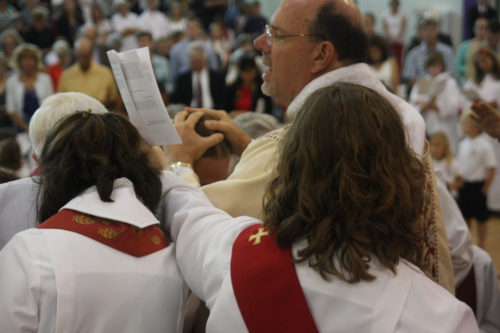 Bishop George Young, along with other clergy members from the East Tennessee and surrounding areas, lays his hands on the Rev. Joshua Ashton Hill during the service. Photo: Episcopal School of Knoxville

“It was incredibly special to be surrounded by so many friends — young and old — who have walked by my side during different stages of my journey towards this day,” Hill said. “The love was thick.”

Nearly 40 clergy from East Tennessee and surrounding areas, along with family and friends of Hill and parents and supporters of ESK, were in attendance for the ordination.

The service, although typically held in a cathedral setting, was hosted in the school’s Kline Gymnasium. The students attended the service as well as participating as both readers and special music. According to the Rev. Daniel Heischman, executive director of the National Association of Episcopal Schools, Hill’s ordination was one of only a handful he can remember taking place at a school.

“ESK was honored to host such a significant event in the ministry and life of Father Josh,” ESK Headmaster Jay Secor said. “Not only did today allow us to celebrate with Josh and his family but it gave our students the opportunity to share in the celebration of the day.” 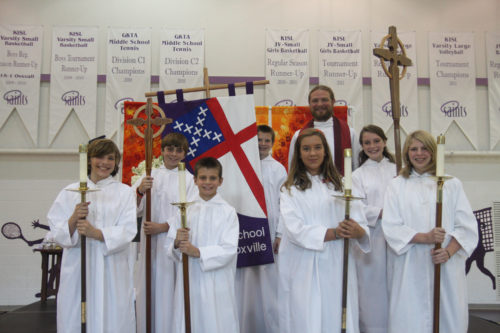 A native of Seymour, Tennessee, Hill graduated from Yale Divinity School with the Master of Divinity degree in 2009, when he also completed a certificate of Anglican studies from Berkeley Divinity School, the Episcopal seminary at Yale. He holds a bachelor’s degree in religion from Emory and Henry College. Hill spent three years as director of youth and children’s ministry at St. Mark’s Episcopal Church in New Canaan, Connecticut. He was ordained as a deacon in the Episcopal Church this past January.

Hill and his wife Hannah have two daughters, Elana and Maya. He is a graduate of Seymour High School and his parents, Keith and Vickie Hill, still reside in Tennessee.

Hill serves as the chaplain at ESK with duties that include teaching religion and ethics, conducting daily chapel services for all Lower and Middle School students and overseeing community service at ESK at all grade levels.