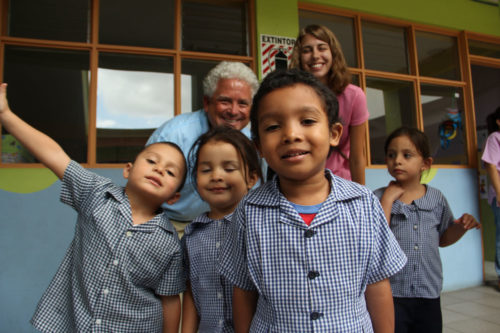 An exploratory group from Holy Comforter Episcopal Church in Burlington, North Carolina, visited the Episcopal Church of Costa Rica the week of Aug. 5 in search of a partnership relationship. Here Tom Lambeth and Morgan Kernodle pose with students from the Hogar Escuela in Barrio Cuba. Photo: Lynette Wilson/Episcopal News Service

[Episcopal News Service – San José, Costa Rica] It may have been love at first sight.

On a recent Tuesday morning, a priest, a pediatrician, a judge and a schoolteacher walked into the Episcopal Church of Costa Rica’s Hogar Escuela, or “Home School,” in the Barrio Cuba section of San José to find 160 children aged six months to 12 years dressed in matching blue and white checked tops and navy blue bottoms.

“The program started here 50 years ago with 10 children, in four years there were 40… ,” explained Costa Rica Bishop Hector Monterroso, adding the school primarily serves children of single mothers in one of San José’s poorest neighborhoods where it’s not uncommon for drug dealers to work the corners.

“The children think that this is normal,” he said.

The school serves as something of an oasis; with everything from its covered playground – it rains nine months of the year in Costa Rica – to the paint colors that encourage calm and learning. By providing the children with the best possible care and environment for play and for learning, the school’s staff, which includes two chaplains, hopes to prepare them for a brighter future.

“We support the children with good education, nutrition, technology and values. By providing a safe place and a different environment [for the children], maybe we can break the cycle [of poverty],” said Monterroso.

The school in Barrio Cuba was the first of two schools the group from Holy Comforter Episcopal Church in Burlington, North Carolina, would visit that day. The second is modeled after the first, in Heredia, a densely populated, industrial city just north of San José, serves children from but in the Gaurarí, an even poorer area populated mainly by Nicaraguan immigrants.

“This is an exploratory group, “said Dr. Shannon McQueen, the pediatrician. “To see what needs fit our talents.”

“We hope it [the partnership] will become crystal clear,” she said, adding that the group will present a plan to the vestry and the church and together discern the path forward.

In January, the Rev. Adam Shoemaker, rector, approached the church’s vestry proposing an international partnership; it concurred and the group spent the week of Aug. 5 in Costa Rica exploring a parish-companion relationship.

Shoemaker served as a Young Adult Service Corps missionary in the Rio de Janeiro suburb portrayed in the 2002 film “City of God” before becoming a parish priest.

“This is the fruit of the YASC program; it has continued to work in my heart and my mind ever since,” he said, in an interview with ENS in Costa Rica.

“Some might ask, ‘why go so far away?’” said Shoemaker, explaining that international service “helps us value that we are part of a larger church and deepens our faith.”

In part Holy Comforter’s desire to partner with one of the church in Costa Rica’s six programs is fueled by North Carolina Bishop Michael Curry’s Galilee Initiative, which challenges members to go out into the community and the Anglican Communion,  said Tom Lambeth, a judge, who serves on the vestry and the church’s mission and outreach committee.

The Diocese of North Carolina and the Episcopal Church of Costa Rica have been in a companion relationship since 1995. A companion diocese coordinator serves in Costa Rica facilitating the relationship and handling trip planning and arrangements, functioning as the bishop’s English-language secretary and his chaplain during pastoral visits, said Clarence Fox, a member of St. Alban’s Episcopal Church in Davidson, North Carolina, who recently finished his service as the diocesan coordinator.

“The position is the go-between between the two dioceses making sure Costa Rica is clear about what North Carolina has in mind [and vice versa],” said Fox. 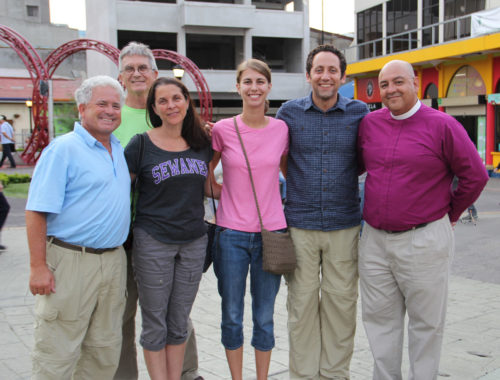 In the same way the exploratory group is approaching its partnership, the church in Costa Rica seeks to match its talents and resources with a community’s needs.

Each of the 19 churches and missions in the Episcopal Church of Costa Rica are encouraged to have a plan based in the church’s three-pronged strategic plan, which includes expansion of the church, Christian education/theological reflection and Christian testimony through outreach, or mission. In addition to a plan, the bi-vocational priests must have a plan to finance it.

“We discuss different points of mission interest and then we discern where we can match our work,” said Monterroso. “It’s not possible to close our eyes when we are in the middle of problem.”

A half-century ago, the congregation of Good Shepherd Episcopal Church in downtown San José opened its eyes to the problems poor people faced in Barrio Cuba and decided to get involved. The school, which has since grown to include its own congregation, Iglesia Episcopal San Felipe y Santiago, operates from 6 a.m. to 6 p.m. Monday through Friday to accommodate the schedules of working parents. Monthly tuition is paid on a sliding scale from zero to $220. What it doesn’t raise in tuition toward its $400,000 annual operating budget, it makes up through government subsidies, grants and donor support, said Monterroso.

Unlike other Central American countries to the north – El Salvador, Honduras and Guatemala – Costa Rica is not plagued by gang violence and drug trafficking has not reached significant levels, said Monterosso.

Still, the country is not immune to poverty, drugs and violence. You might miss Gaurarí, if you don’t know it exists. But behind a shopping mall in Heredia is an area of shacks and government housing that is home to a large number of immigrants from neighboring Nicaragua: there are some 400,000 Nicaraguans in Costa Rica. 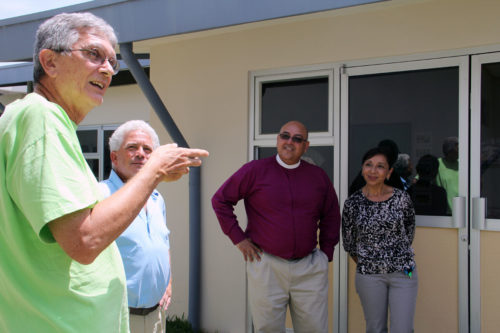 Building on its successes in Barrio Cuba, Cristo Resucitado, a burgeoning congregation that worships in an apartment a few miles away, opened a second Hogar Escuela in Heredia in early July, to serve the children and parents living in Gaurarí.

“This school is the result of hearing the needs of the community and responding as a shepherd would.  It has involved a lot of shepherds:  the one who gave the land – and then gave a bigger piece of land, those who designed this school, those who helped to build and supply the building, and supervise its construction, and those who have painted these murals,” said Presiding Bishop Katharine Jefferts Schori, during the school’s June 29 dedication. “This school has been prepared to receive many lambs, to feed and nurture them in body, mind, and spirit.  It will need the continuing shepherding of teachers and cooks and overseers who will help keep it healthy and moving toward good pasture.”

“If this school becomes the home or shelter for which it is named, it will reach out to the wider community to feed and tend the lambs and sheep who live around here, including some who will never enter this place.  That shepherding begins with the first students who come here….”

During a visit to the school, Monterroso explained that the man from whom the church bought the land, after seeing the presiding bishop on television during the February 2009 ground breaking and gaining a better understanding of the project, offered the church a slightly larger piece of land across the street. 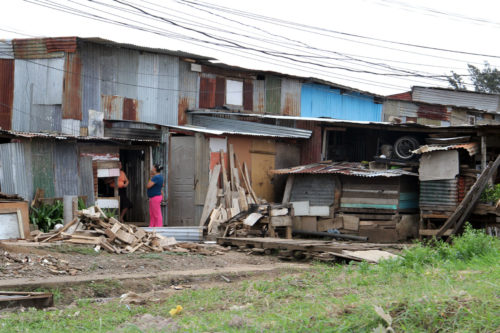 Some of the children attending the Hogar Escuela come from Gaurarí, an area behind a shopping center where people have built tin shacks. Photo: Lynette Wilson/Episcopal News Service

Many of the immigrants from Nicaragua have settled in shacks, said Sandra Cardona, the administrative director of both schools and the bishop’s wife.

“We use the term ‘precario,’ to describe them,” she said, meaning those who live precariously. “We empower them to go out and look for jobs. Make them believe that they are capable of doing more for themselves and their child.”

The most difficult challenge the staff at the Heredia Escuela face, said Cardona, is changing the mother’s mentality of poverty.

“Here what we’ve seen are many teenage moms, children raising children, there are no opportunities for them; their mothers didn’t have opportunities,” said Cardona, adding that’s why the school works with both the mothers and the children. “The children don’t have problems, they inherit problems.”

The children who attend Hogar Escuela in Barrio Cuba mostly have working mothers, but that program, Cardona acknowledged, has been around for half a century. The Heredia school now has more than 35 students, and also operates from 6 a.m. to 6 p.m. Monday through Friday.

Prior to the opening of the school, the church with the help of St. Alban’s Episcopal Church in Davidson and other mission groups ran a vacation Bible school in a building next to the police station in Gaurarí. With 40 percent of the labor provided by mission groups, the $750,000 school project was constructed over three years, said Monterroso.

The companion agreement between Costa Rica and North Carolina is based in relationship and exchange, the bishop said.

“In the Anglican Communion we hold dear endeavors that build and strengthen ‘bonds of affection’ between geographically distance and culturally different locations within the church,” said North Carolina Bishop Suffragan Anne E. Hodges-Copple, in an e-mail message to ENS. “Such bonds don’t exist in a merely theological or historical way. They are divine gifts we are invited to nurture in real and tangible ways. The exchanges between our two dioceses have built real relationships, real companionship, real conversation between and among individuals, vestries and parishes.

“In other words, these relationships become sacramental in nature – outward and visible signs of God’s healing grace.  Such companionship among people from different cultural backgrounds reveals that our particularity and diversity is also part of our catholicity,” she added.

“To be ‘catholic’ is to recognize that my particularity must serve to build up the whole,” she said.

Hodges-Copple a “particularly compelling example of mutual benefit” has been an effort to hold vestry trainings in both dioceses. “Vestry members who have participated in these events have had their own sense of call and purpose strengthened by learning from the experience of others,” she said. 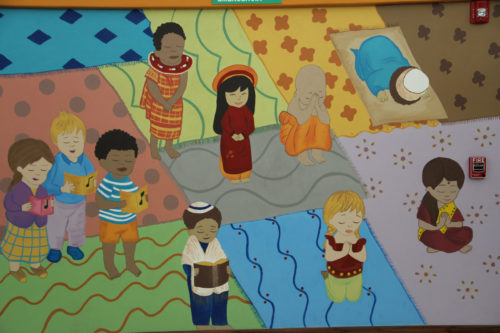 A mural in the all-purpose room at the Hogar Escuela in Heredia shows all of the major world religions, making it clear that the school is open to everyone. Photo: Lynette Wilson/Episcopal News Service

Like most of Latin America, Costa Rica is a majority Roman Catholic country, where the laity is used to top-down style of governance, so it’s been helpful for the laity in vestry roles to learn about how vestries operate from their counterparts in North Carolina, Monterosso explained.

It was the quest for a cross-cultural experience that made sixth-grade teacher Morgan Kernodle want to be part of the exploratory group, that and the fact that many of her students come from Latin America and when she told them she’d be visiting Costa Rica, they got excited.

“I was curious about what’s out there beyond the U.S., and as soon as they said schools, I was sold,” she said. “It’s helps put things in perspective; students face similar struggles, single parents, struggles are universal.”

Over a late lunch, reflecting on what the group had seen so far, Lambeth, the vestry member and judge, was still thinking about what he’d witnessed early that day in Barrio Cuba.

“I fell in love with that school,” he said.