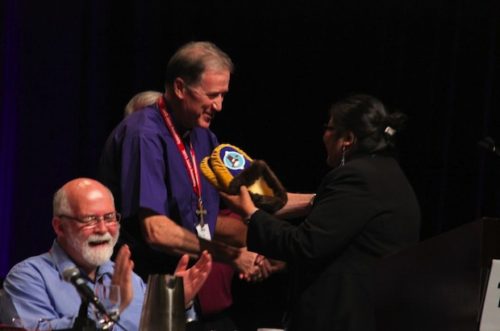 [Anglican Journal] Bishop Lydia Mamakwa wiped away tears of joy, while Archbishop David Ashdown and Archbishop Fred Hiltz swayed as a hymn was sung, minutes after General Synod on July 6 gave its unanimous concurrence to the creation of an indigenous diocese in northern Ontario.

“This is the day the Lord has made, let us rejoice and be glad,” a beaming Hiltz said as members gave a standing ovation and extended applause when the resolution passed.

Approval of Resolution B001 means that the diocese of Keewatin will cease to operate on Dec. 31, 2014, but will continue as a legal entity until Sept. 30, 2015, at which time Ashdown will end his term as diocesan bishop and metropolitan of the ecclesiastical province of Rupert’s Land. Other remaining parts of Keewatin will be “redeployed” to other dioceses. The diocese of Rupert’s Land has agreed to absorb Keewatin’s southern region churches.

This means “there will be no increase in the number of dioceses,” states the resolution.

Prior to the vote, several representatives of the diocese offered reflections about the resolution.

“This is a historic moment,” said the Rev. Amos Winter, from Kingfisher Lake, Ont. “God is surely in control and he has guided this moment…We are being called to go where no church has gone before…Let us unite as the people of God.”

The new northern Ontario diocese—whose name will be determined by aboriginal elders and other church and community members in September—will cover 16 First Nations communities belonging to Treaty 9 around Kingfisher Lake, north of Sioux Lookout. Mamakwa, who was elected in 2010, is the current area bishop.

After the resolution passed, Mamakwa embraced Hiltz, primate of the Anglican Church of Canada, and presented him with a pair of moccasins as a gift. The primate promised to wear them as a sign of the church’s commitment “to walk together” with indigenous Anglicans. He paid tribute to Mamakwa’s leadership, describing it as “so inspiring and effective.” He noted her capacity to engage with both elders and youth.

Hiltz also paid tribute to Ashdown, calling him “a courageous leader…[who] worked so hard for this day to come.”

In an interview, Ashdown noted that the resolution also passed unanimously at the diocesan and provincial levels. “That says it’s very much the will of God. The spirit is moving, and the church recognizes the work of the Spirit,” he said.

“We were a bit anxious a while ago about coming to General Synod for concurrence because we thought there was perhaps a lack of understanding about what we’re trying to do,” said Ashdown. Some members had initial concerns that “we might be creating a structure on top of another structure” and whether the diocese can in fact be self-sustaining and self-determining, he added. Keewatin has shown that “we’re not creating new structures,” he said. “We’re not dealing with something that’s brand new. It’s another step in a journey already begun. It’s working to a point where our mission is shaping our structures, not our mission being constrained by structure.”

National Indigenous Anglican Bishop Mark MacDonald, for his part, said the creation of an indigenous diocese “is the beginning of something glorious and wonderful.”

Bishop Don Phillips, bishop of the diocese of Rupert’s Land, said, “I assure you that we are excited and proud to play a supportive role in this new life of our church.”

The transfer of the southern region of Keewatin to the diocese of Rupert’s Land is “not an annexation,” he said. “God is doing something new…We are excited about what God has in store for us now and in the future.”

Diocese of Saskatchewan Bishop Michael Hawkins, who chairs the Council of the North, said self-determination is not a political but a “theological concept.” He described the creation of the indigenous diocese as “a Pentecost moment.”