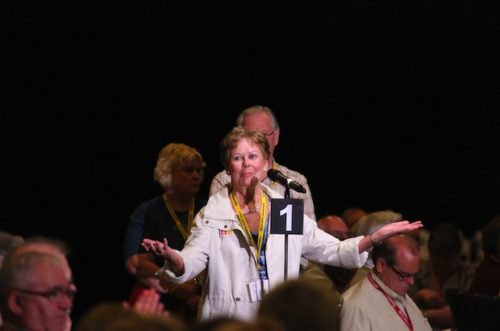 [Anglican Journal] As the historic first-ever Joint Assembly wound down, attendees stepped up to the mic with sincere praise—and constructive gripes that may help the next assembly go even more smoothly than this one did.

Iris Veinotte, a Lutheran from Newburne, N.S., expressed appreciation of the prayer time provided in the agenda and said attendees were “wonderful, fine Christian people. You could talk to anyone about anything, and they shared their very depths.” She was critical, however, of time misspent on the minutiae of punctuation and wording in bylaws and resolutions. “We have so many more important things to do.”

The Rev. Bruce Bryant-Scott of Victoria pointed out that it would have been better if, instead of sitting at regionally mixed tables, Lutherans and Anglicans from the same regions could sit together for discussion in order to be able to take back to their home regions “a common spirit and vision to work together.” He also asked: “What is stopping us from doing more work together?”

Jennifer Warren from the diocese of Nova Scotia and P.E.I. said she found the days of the tightly packed five-day agenda overly long and very tiring. “We had 13- and 14-hour days, so we need to look at the length of the time we really need.” She also thanked the media at the assembly for its fair coverage of sensitive issues such as same-sex marriage.

In poignant commentary on the five days of Anglican-Lutheran fellowship, Bishop David Parsons of the diocese of the Arctic spoke of “a great earthquake in the Communion,” and said, “My knees are shaking.” He also asked, “Are we really prepared to listen to each other?” Parsons stressed that we must listen to the aboriginal peoples. “I do not believe we are together…Why don’t we really talk?

Speaking of General Synod’s groundbreaking decision to create a new indigenous diocese, an aboriginal attendee said, “I had goosebumps up and down my spine and my arms.” For her, the historic event shows that “with the Creator, everything is possible.”

The Rev. Anne Privett of the diocese of British Columbia noted that English is not the first language of all attendees, and requested that the next synod translate resolutions into indigenous languages.

The Rev. Duke Vipperman of the diocese of Toronto commented on how easily and unselfconsciously indigenous people speak about their faith, and suggested that General Synod consider inviting indigenous people of the north to come to the south and ” teach us how to speak naturally and comfortably about Jesus.”