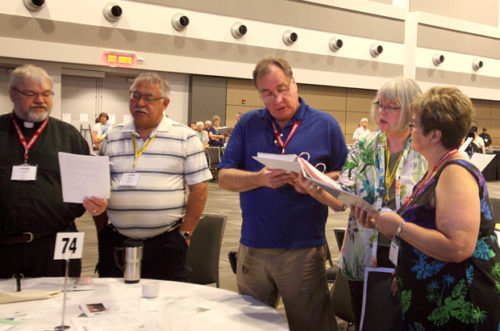 Following the passing of the resolution, the Primate invited the delegates to stand and read it aloud. Photo: Art Babych

[Anglican Journal] The Anglican-Lutheran Joint Assembly on July 5 passed, by a vote of 98 per cent, a joint declaration focusing on the issues of homelessness in Canada and “responsible resource extraction” involving Canadian companies in Canada and overseas.

No one spoke out against the declaration when it was presented for debate on the floor, but a number stood to express support.

The Rev. Kenn Ward, an ELCIC pastor, made an emotional plea for the declaration, citing how his friend, Katherine Baiya, a Congolese refugee now living in Winnipeg, asked him once what churches are doing to end rape and other human rights abuses resulting from the mineral wealth in the Democratic Republic of the Congo. “She [Baiya] said, ‘It’s your mining companies who have done this to us.’ ”

Ward said the “terror and tragedy” hit home when Baiya shared news that her sister had recently been hacked to death in the Congo, leaving behind five children. “This motion is a small thing, but at least I can take this back to her and say, ‘We’re trying to do something,’ ” said Ward. Ward’s congregation in Sherwood Park, Winnipeg, shares ministry with Baiya’s black Pentecostal congregation, Good Seed.

The Rev. Iola Metuq, Anglican diocese of the Arctic, noted how mining companies operating in Nunavut “get billions of dollars from our land,” while indigenous people are left with “pollution, contaminated animals.”

The declaration commits the Anglican Church of Canada and the Evangelical Lutheran Church in Canada to work together in raising public awareness, “to discern where and how we can make a difference, to act where we can, and to advocate for equitable and innovative approaches to the challenges that we share.” The two churches—in full communion since 2011—also vowed to pray “for all affected by these issues and those who bear responsibility in addressing them.”

On the issue of “responsible resource extraction,” the declaration commits the churches to support indigenous communities in Canada and abroad “in exercising the right to Free, Prior and Informed Consent” with regard to development projects that affect their traditional territories. It also promises to “advocate for responsible and ethical investment in both Canada and around the world.”

The declaration notes that Canadian companies are “major players” in mining, energy production and resource extraction across Canada and overseas. “They generate wealth for our societies, but they also give rise to serious and complex environmental, socio-economic, and human rights issues,” it states.

On the issue of homelessness, the declaration commits the two churches to “advocate for renewed federal funding” and for an “integrated national collaborative strategy and greater accountability on the part of provinces and municipalities” in addressing homelessness and substandard housing.

“As we look across Canada, we are disturbed by the reality that around 400,000 people are without a healthy place to live and that homelessness has continued to increase despite years of unprecedented economic growth and prosperity in our country,” the declaration states.

A number of aboriginal Anglicans stood to express support for the declaration, noting how homelessness and substandard housing are issues that affect a large indigenous population, a number of whom are Indian residential school survivors.

Sylvia James, a First Nation Cree who sat at the assembly as a partner with no voting privileges, urged the assembly to support the motion. She spoke about the plight of First Nations people forced to live in motels because their homes have been damaged by floods, or those who continue to live in mouldy homes on reserves, or those who have been transferred to locations that are “in the middle of nowhere.”

The declaration notes that many, particularly the working poor, are unable to find affordable housing. “The costs in terms of human suffering are staggering, as are the additional burdens for health care and social services,” it says.

While churches help by providing a broad range of services and support for the homeless and the working poor, these are not enough, it adds.

The declaration carries a promise by the churches to act by “nurturing and supporting” their own agencies and programs that work with and for the homeless, the under-housed and refugees.

On the issue of resource extraction, the declaration expresses concern that recent Canadian legislation (Bills C-38 and C-45) has made changes to environmental legislation and assessment processes “that potentially threaten the ecological integrity of areas under proposed development.”

Resource extraction and development projects “often cross the traditional territories of Indigenous peoples without their Free, Prior and Informed Consent, a right enshrined in the UN Declaration of the Rights of Indigenous Peoples, to which Canada is a signatory nation,” adds the declaration.