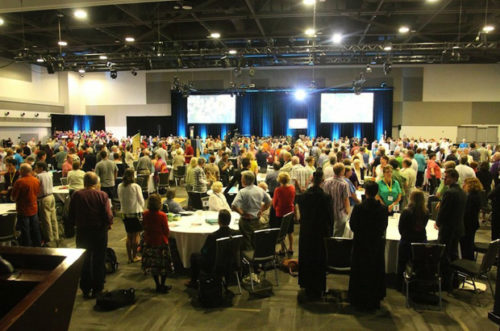 About 600 Anglicans and Lutherans gather at the plenary hall for the start of their Joint Assembly, July 3 to 7. Photo: Art Babych

[Anglican Journal] In a joint address delivered at the opening of the Joint Assembly, the national leaders of the Anglican Church of Canada and the Evangelical Lutheran Church in Canada (ELCIC) outlined the ways in which their churches have deepened their full communion relationship, now in its 12th year.

The “most hope-filled expression” of full communion has been CLAY, the Canadian Lutheran and Anglican Youth gathering that is held every two years, said Archbishop Fred Hiltz, primate of the Anglican Church of Canada. Youth are the ones who remind their churches “not to forget” this relationship, he added.

Anglican and Lutheran youth also embark on projects with their respective relief and development agencies, and this has helped inspire the theme of the assembly, Together for the Love of the World, said Hiltz. “Our youth are showing great leadership in our churches.”
The theme illustrates that while Anglicans and Lutherans celebrate their relationship, “We are mindful that it must be about something beyond ourselves,” added Hiltz. “The fellowship we share must be for the benefit of the world.”

Hiltz noted how the agenda of the assembly focuses on major social issues facing Canada, including the “crisis of homelessness” and access to clean water in indigenous communities nationwide.

Johnson, for her part, noted the different areas of co-operation that exist among Anglican and Lutheran leadership─from the joint meetings of bishops and councils to her own monthly telephone calls with the primate. The phone calls have been invaluable, said Johnson. The calls have kept them abreast of developments in each other’s churches and allowed them to “share our professional and our personal joys and sorrows, she said. The strengthening of their personal relationship “serves to strengthen the relationship between our two churches,” said Johnson. On a personal note, she thanked Hiltz for his support and encouragement, saying, “It is part of what has kept me sane in the last six years.”

The two leaders also spoke about the challenges facing their churches, including declining membership and diminishing financial resources.

“The reality we are facing is that our church is declining in membership, in number of congregations and in financial resources at all levels of the church,” said Johnson. This has meant a reduction in staff and program work, she said, adding that this reality is also being faced by other Canadian churches. “In a recent gathering of church leaders in Canada, it was apparent that we are all singing out of the same choir book,” said Johnson. Further reductions in ELCIC finances “will mean even deeper cuts and the end to more kinds of programming,” she added.

Anglicans have also experienced a similar decline, said Hiltz, citing how less revenue has resulted in cuts to program and reduced staff. “…We have 25% fewer staff than we did six years ago,” he noted.

Increasingly, said Hiltz, Anglicans are asking “how, in the spirit of full communion, we could be working more closely with the ELCIC, particularly in matters of liturgy, theological education and public witness for social justice.”

Johnson concurred with Hiltz, citing how in joint meetings of National Church Council and the Council of General Synod, “it was surprising to see how much we still needed to learn about each other, how much we do have in common and how many possibilities there are for future collaboration.”

The two leaders also put a spotlight on some initiatives that have borne fruit as a result of their full communion relationship.

In the area of liturgy, Johnson reported that the joint National Worship Conference has enabled the two churches to “learn more about each other, and grow in vision and skill for the worship ministry…” Lutherans and Anglicans began with joint attendance, and later, joint planning committees, she noted. At the coming joint conference scheduled July 20 to 23 in Edmonton, “Anglicans will be joining the Lutherans in recognizing for the first time a Companion of the Worship Arts, an honour bestowed to acknowledge significant contributions to the worship lives of our churches.”

The two leaders also spoke about their churches’ ongoing work.

Hiltz reported on the work around healing and reconciliation with indigenous Anglicans and on liturgical renewal─including an examination of the baptismal covenant through the lens of the Marks of Mission, a review of eucharistic rites and the daily offices for Morning and Evening Prayer, and the renewal of the rites for ordination.

“Across the Anglican Communion there is an emerging call for public rites for corporate reconciliation─in the context of the needs within the church and within nations recovering from  years of civil war, racism and various other forms of discrimination and oppression,” said Hiltz.

Johnson reported on the ELCIC’s work in the area of “spirited discipleship,” which includes “a call to spiritual renewal.”  ELCIC’s National Church Council has asked its faith, order and doctrine committee to study the provision of word and sacrament ministry in the ELCIC, she explained. “This directive recognizes that we are facing increasing challenges, especially in rural areas, to provide for the provision of regular word and sacrament ministry,” said Johnson.