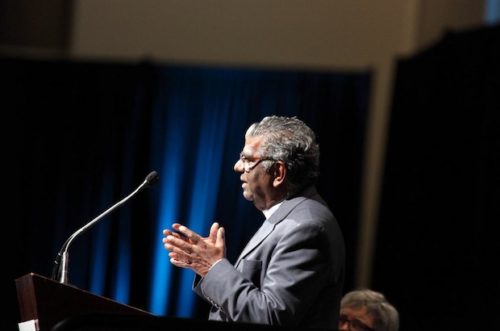 “Part of the mission of the church is to critique the fundamental basis of self-centredness,” said the Rev. Dr. Christopher Duraisingh. Photo: Art Babych

[Anglican Journal] An eminent South Indian theologian on July 3 challenged Anglicans and Lutherans to “de-centre” themselves and their churches so that they can truly serve the world.

“Part of the mission of the church is to critique the fundamental basis of self-centredness,” said the Rev. Dr. Christopher Duraisingh, who gave the keynote speech at the first day of the Joint Assembly of the Anglican Church of Canada and the Evangelical Lutheran Church in Canada (ELCIC), at the Ottawa Convention Centre.
The experiences of marginalization, including those experienced by Canada’s First Nations people, “is a consequence of that culture, that greed borne out of self-centred selves,” said Duraisingh.

Duraisingh, who is professor at the Episcopal Divinity School in Cambridge, Mass., said the Joint Assembly was one example of how “by bringing two diverse groups of people together…the wisdom of God in its rich diversity will be made known to the world.”

Touching on the theme of mission, Duraisingh urged about 600 Anglicans and Lutherans gathered here to revisit the fundamental reason for being a church in the world. Mission is the church’s raison d’être or reason for existence, he said; it is not simply a function of the church. “Start with a mission and the church will be found,” said Duraisingh.

He urged the assembly to think of the theme Together for the Love of the World, not as an invitation “to grow bigger and better” and not as a project, but as “a major calling to nurture and nourish an alternative consciousness,” one that would involve, like Jesus, “a solidarity plunge into the anguish, hopes and aspirations of his people.”

Jesus’ baptism was “not for the forgiveness of sin…not sin management,” but rather “an identification with the world, with the hopes and aspirations of the poor and the oppressed,” said Duraisingh.

Reacting to Duraisingh’s reflections, ELCIC National Bishop Susan Johnson said the theologian’s worlds were “a pacemaker jolt to the heart.” She said that Duraisingh interpreted the assembly’s theme “in ways that I haven’t even imagined.”