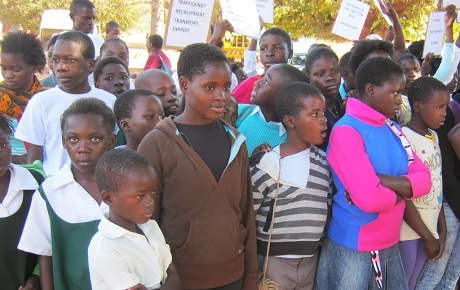 [Anglican Communion News Service] The Anglican Church in Zambia has welcomed the news that the country’s tourist capital Livingstone has partnered with the International Labour Organisation (ILO) to fight child trafficking and child labor there.

“Being a border town, Livingstone is a fertile ground for human trafficking,” said the Rev. Emmanuel Chikoya, Livingstone West parish priest. “Just recently 32 children were almost trafficked into a neighboring country and members of the church were among those that exposed the incident.”

The city of Livingstone is preparing to co-host the United Nations World Tourism Organisation (UNWTO) General Assembly in August this year. Chikoya has urged his parishioners to be vigilant as some visitors may take advantage of the event as an avenue for human trafficking.

“The fact that international delegates will be flocking to Livingstone…creates a perfect environment for people to be trafficked, especially for sexual services and any other forms of cheap labor,” he said. “When people notice unusual numbers of children in their neighborhood, they should question such occurrences. Let them take interest especially when they see somebody who is nervous and uneasy as this could be a case of human trafficking.”

Through their social arm, the Livingstone Anglican Children’s Project (LACP), the Anglican Church has also been outspoken and active in trying to identify and prevent all forms of child labor.

Chikoya, who is also the project’s director, said cases of human trafficking and forced labor were real and anyone can be trafficked either by force or coercion, or by being enticed by promises of better prospects.

“So far we have withdrawn 300 children from child labor and about 400 children who are at risk of child labor,” revealed Chikoya. “Human trafficking and child labor are intertwined, hence the need to tackle them together.”

Chikoya said that there are many forms of child labor, some of which may seem innocent and normal. “Some children are used to leading their handicapped parents, to prostitution, street vending, scavenging for empty water bottles for recycling and many others,” he revealed.

“Withdrawing these kids from such activities also means that we need to deal with the issues of sustainability since for many, this is their source of income for them and their parents,” he said. “Therefore, we have also tried to empower their parents with basic income generating activities to help supplement their resources.”

Chikoya concluded by emphasizing the need to involve children and women in any efforts of trying to curb child labor and human trafficking. “Since women and children are the worst hit in issues of human trafficking and child labor, there is need to actively involve them when carrying out sensitization programs”.

He added, “Fighting human trafficking and forced labor requires the co-operation and support from everyone, including members of the community.”