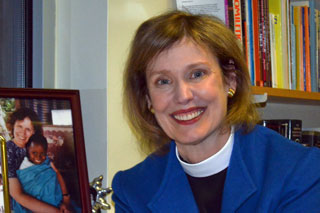 “I am delighted to institute the Very Reverend Lucinda Laird officially as Dean and Rector of our Cathedral,” Bishop Whalon said. “In the brief time she has been among us, she has impressed us all with her clear faith, strong intellect and gift of gracious presence. I look forward to working with Dean Laird as she leads the Cathedral into the future God has in store for us all. With the extraordinary new resources that the parish now has, thanks to the Together in Faith Campaign, there is no doubt in my mind that we are entering into a new chapter of flourishing mission, in Paris, in Europe, and “away to the ends of the earth” (Acts 1:8).

Dean Laird took up her duties in Paris in March after serving for 15 years as rector of St. Matthew’s Episcopal Church in Louisville, Kentucky. She was called to the Paris church – the Cathedral of the Holy Trinity – after a year-long process of discernment by a search committee and the Cathedral’s vestry.

“While the ceremony is focused on the new dean, it is very much a celebration of the whole ministry of the parish,” said Laird. “This will be particularly true on Trinity Sunday, as we are also celebrating our renovations and new spaces, giving thanks for them and all who made the work possible.”

She continued: “It’s a moment to pause, to give thanks for what has been, and to look forward to the exciting future to which God is calling this Cathedral.  In this moment, we celebrate and give thanks, as we ask God’s blessing on our ministry.”

Besides the institution of the Dean, the Cathedral dedicated new space it developed though bound by the tight limitations at its campus on Avenue George V just off the Champs-Elysées in the heart of Paris. A €6 million construction project lasting three years has given the Cathedral new facilities for study and worship, expanded quarters for its celebrated music program, a modernized kitchen adjacent to the Parish Hall, along with other much needed facilities.

A number of guests were invited, including clergy or their representatives from other Paris churches and religious organizations, and Friends of the Cathedral, many of them former parishioners who have moved away but maintain contacts and continue to support the cathedral’s development and missions. A number of Dean Laird’s former parishioners from Louisville also attended.

The homily was delivered by the Very Reverend Tracey Lind, dean of Trinity Cathedral in Cleveland and a friend of Dean Laird’s.

An exceptional program of music was planned by Zachary Ullery, director of music. The program at the 11 A.M. service included the anthem by Sir Charles H. Hubert Parry “I was glad.” Sometimes known as the Coronation Anthem, it is performed by a double choir. The program also included Franz Joseph Haydn’s  “Te Deum.”

Another musical highlight of the day was the Memorial Day evensong at 6 p.m.

The date in the liturgical calendar was Trinity Sunday, and the Cathedral of the Holy Trinity uses that occasion each year to celebrate its community in Paris and its extended community among former parishioners and other supporters.

Laird was rector in Louisville from 1998 until coming to Paris. Before that she was rector at St. Mark’s Church in Teaneck, New Jersey. She previously served as assistant for college ministries at the Cathedral of St. John the Divine in New York City and as curate of the parish of Christ the Redeemer in Pelham, New York.

A native of New Orleans, she is a graduate of Barnard College and the General Theological Seminary. She also studied acting at Temple University in Philadelphia.

Within the Episcopal Church she has been on the faculty of the Preaching Excellence Program (Episcopal Preaching Foundation); was a member of the Standing Commission on Ecumenical Relations; has served on the Advisory Board of the Church Pension Fund; is on the Board of Trustees of the General Theological Seminary; and has been president of Associate Alumni/ae of the General Seminary.

In Kentucky she served on the board of trustees of Berea College; the board of directors of Faith Channel 19, and the Board of Directors of Planned Parenthood of Louisville. She has hosted or been a panelist on public affairs television programs in both Louisville and New York, has done mission work in Kenya and the Ivory Coast, and at one period swapped parishes with an English vicar.

As the first woman to be dean of the Paris cathedral, she joins a growing list of women serving in a similar capacity at several of America’s largest Episcopal cathedrals. There are also several dozen women serving as bishops in the worldwide Anglican Communion, and notably as the presiding bishop (primate) of the Episcopal Church.

As the 10th dean of the Paris cathedral of the Holy Trinity, Laird succeeds the Reverend Canon Zachary Fleetwood, who resigned in 2011 to go to St. Columba’s-by-the-Castle in Edinburgh. The Right Reverend Peter James Lee, retired bishop of Virginia, served as interim dean and rector, a role he fulfilled previously at both Grace Cathedral in San Francisco and the General Theological Seminary in New York.

In Paris, Laird joined the existing staff of the Cathedral, including the Reverend Elizabeth Hall Hendrick, canon pastor; Giles Williams, canon for administration; and Mr. Ullery, director of music.

For more than a century the American Cathedral has been a center of worship for Anglophones in Paris. The Cathedral serves a congregation of American, British and French parishioners as well as many other Europeans, Asians, Africans and Latin Americans.  Permanent parishioners total about 500 and that number is considerably augmented by students, tourists and business persons in Paris on shorter-term assignments.

Its noteworthy music program, including choir and the cathedral organist, Andrew Dewar, is enhanced by the concerts, both free and paid, it offers regularly.

The Cathedral – actually a pro-cathedral, in that it remains a parish church – is the mother church of the Convocation of Episcopal Churches in Europe and the seat of Bishop Whalon.