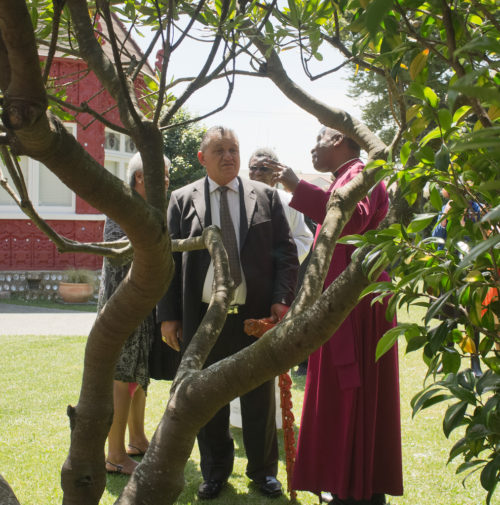 [Anglican Taonga] The Anglican Consultative Council broke camp Nov. 1 and headed south to Ngaruawahia for an audience with the Maori King.

The clouds were heavy overhead as the buses trundled towards Turangawaewae, the majestic marae, or sacred place, on the banks of the Waikato River that is the seat of the Kingitanga.

But as the 150 or so ACC members and fellow travelers were called on to the marae for the powhiri, or ceremonial welcome, those clouds parted and the sun broke through.

And it was about the time that Southern Malawi Bishop James Tengatenga, ACC chair, responded to the welcome on behalf of the manuhiri, or visitors, that participants sensed something exquisite and providential about the visit.

Maori tikanga, or custom, demands that at each powhiri speakers pay homage to those who’ve departed – to the tupuna, or ancestors, of the gathering place.

Tengatenga reminded those gathered that today is All Saints Day.

Archbishop of Canterbury Rowan Williams responded to the welcome, noting that the land is Aotearoa, the land of the Long White Cloud.

“And today, when we celebrate the feast of All Saints, we may very well think of that phrase in Scripture, where we are told that we live in the presence of a great cloud of witnesses.” 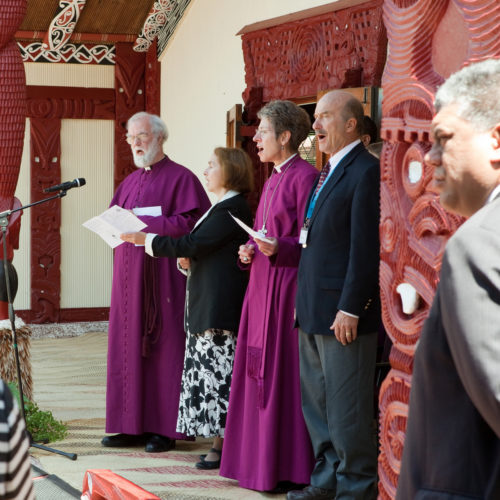 One-hundred-fifty years earlier, Williams’ hosts had witnessed the loss of 1.2 million hectares of their lands to a rapacious settler government.

“Perhaps,” said the archbishop, “this is in a very particular way a land of witnesses. A land where we know that … our acts, and our thoughts, and our relations with one another are witnessed by those who have gone before us; so that their witness helps us to bear witness in our own generation; so that we know that we stand with them before the eyes of God.

“And so… we thank God that the cloud of witnesses over us, and around us, calling us to answer for our faith, for our lives, for our relationships before God. Knowing that we will answer to God for the peace we make, and the justice we serve together.”

In June 1858, at the very marae where the ACC was being greeted, Kingi Tuheitia’s tupuna, Potatau Te Wherowhero, was crowned as the first Maori King.

Many North Island chiefs had laid their lands and services at Potatau Te Wherowhero’s feet, in the vain hope that by banding together under one leader they could stem the alienation of their lands.

At several points during the ACC’s Nov. 1 welcome, the visitors heard again the famous whakatauki, or proverb, that Potatau Te Wherowhero spoke at his koroneihana, or coronation:

There is but one eye of the needle
through which the white, red and black threads must pass.
After I am gone hold fast to the law, the truth and love
Forsake all else…

It wasn’t just the hosts who were reciting that famous Tainui proverb, either.

Because when Maori Bishop Kito Pikaahu spoke first for the manuhiri, he cited the proverb and gestured to the ACC members assembled behind him – as if to say, these red, white and black threads have passed through the one needle to become brothers and sisters in the Anglican Communion.

And he paid tribute to Kingi Tuheitia, who was seated on his throne across the marae atea from where Pikaahu spoke.

“The crown that you wear,” he told the king, “is not a crown of diamonds, gold or silver. It is the crown of the Bible, the living Word of God, the Holy Word of God.”

And for those who know their kingitanga history, those words were significant, too.

Because at Potatau’s 1858 koroneihana, and at the coronation of every subsequent Maori king or queen – the moment of crowning is signified by the kingmaker holding a Bible over the new monarch’s head.

Williams – his speech is reproduced in full here – also acknowledged that whakatauki about red, white and black threads.

He drew attention to a similar metaphor found in the Scriptures – the plaiting of the three-fold cord which, the Book of Ecclesiastes says, is not easily broken.

He then went on to another verse of Scripture. And with this one, he was speaking fairly and squarely to King Tuheitia.

“Your majesty, Te Arikinui [great chief, the title of the Maori King] we have in our minds as we come to a royal court, saluting yourself and your household, the words of the psalm: ‘Give the King your judgements O God, give your righteousness to the son of the royal house.'”

“We thank God for the service of justice and righteousness represented by the throne on which you are seated,” he added. “And we pray that God continue to give to you, and all those who work with you, those gifts of righteousness and insight…And we pray that that righteousness and that justice will be the star by which all of us see to navigate our lives in the presence of those witnesses around us, in the presence of what God has given us and continues to give us.”

Anyone close to the ranks of the tangata whenua, the host people, when Williams was speaking, heard murmurs of approval.

They appreciated him acknowledging their history and making connections between their story and the Anglican story, between the dignity of their earthly king and the heavenly king.