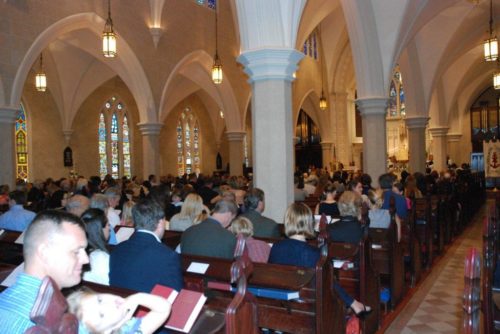 The church re-opened its doors on Sept. 30, in time for the Feast of Michael and of All Angels. Both the Family Eucharist and the later Choral Eucharist were completely full for the joyful homecoming. Photo/Nancy Ezell Suggs

[Episcopal News Service] Displaced for one year, one month, and one week, the congregation of Grace Episcopal Church in Charleston, South Carolina, returned home to its historic sanctuary this past Sunday, Sept. 30.

A fixture of the city skyline for 167 years, the Gothic church was condemned following the Virginia earthquake of August 2011, after seismic sensors detected movement in the clerestory walls. After extensive and painstaking work to replace and strengthen disintegrating 19th century mortar, Grace was deemed “safer than the day it was built,” and reopened for Feast of St. Michael and All Angels.

In his family service homily, Grace’s rector, the Rev. Canon Michael Wright, said: “Yes, our walls have been strengthened, but in revealing that weakness, the entire church has been healed and strengthened in community, from without and within…Like the Children of Israel, we would never have chosen to endure a time in the wilderness, but we did discover some incredible gifts along the way. And we have discovered God in new ways and in different places.” 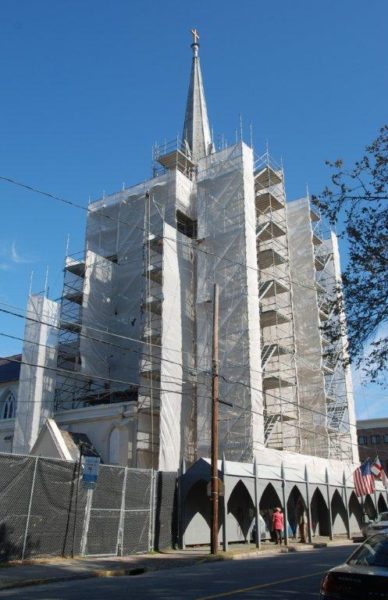 In 2006, Grace Church was poised to build a new parish hall to serve its growing congregation. During preparations, engineers discovered that the limestone mortar used in brick construction in the 1800s had become weak and powdery over time, causing the tower to lean and extensive cracking in its clerestory walls. Phase I in 2008 stabilized the steeple and included installation of corrosion-proof metal rods, and the injection of an epoxy substance in thousands of bored holes in the masonry walls. This work, which extended over three years at a cost of approximately $10 million, was completed in 2010. The planned second phase had to be expedited following the 2011 Virginia earthquake, which caused the clerestory walls to delaminate and the historic church to be condemned. After being displaced for more than a year, it reopened on Sept. 30 in time for the Feast of St. Michael and All Angels. Photo/Nancy Ezell Suggs

During most of the reconstruction, the 9 a.m. family service was held in the church’s parish building, Hanahan Hall. But early services were held next door at Mt. Zion African Methodist Episcopal Church, and for the 11 a.m. Eucharist, Grace has been a recipient of the generous hospitality of the oldest Roman Catholic parish in the Carolinas—St. Mary of the Annunciation. These friendships promise to remain; Wright has been asked to deliver the homily for a Sunday Roman Catholic Mass in October.

The congregation has celebrated both Easter and Christmas Lessons and Carols in the Kahal Kadosh Beth Elohim Synagogue, an offering of a sacred space that celebrated the unity between two faiths. The city’s Lutheran, Unitarian, Episcopal and Presbyterian churches have generously opened their doors for weddings, baptisms, funerals, and festivals during this yearlong time of both wandering and welcome.

Indeed, Grace Church received encouragement from the wider Episcopal Church family, from Holy Cross Faith Memorial at Pawley’s Island, from Presiding Bishop Katharine Jefferts Schori, to the clergy and leaders throughout the church. The Episcopal congregation has expressed its gratitude for being part of a church that is praying for them beyond its borders.

“Did we know such goodness was present, freely offered and joyfully celebrated beyond our own sacred walls?” Wright asked during his sermon. “We do now!”

The church was filled Sept. 30 for both the 9 a.m. Family Eucharist and the 11 a.m. Choral Eucharist, with members old and young, new and long standing.

Anne Hawkes, a retired English professor and church greeter, admits she will miss the close-knit parish hall services. “You could look across the room and see families and people you knew. It was more intimate,” she said. “But of course, I’m thrilled we’re back in the church. I’ve missed going to the communion rail in the sanctuary. It was funny though, in Hanahan Hall, you couldn’t kneel; there wasn’t room. Today, we got to the parts of the services where we typically kneel, and we had to feel our way again.”

Nancy Ezell Suggs, director of parish life, called this first day of service “emotional overload. I could see older parishioners coming in, and the return was so important to them. But also the kids…the Children’s Choir was thrilled. And some of our new children had never been in the church, or if they were very young, they had no memory of it.” 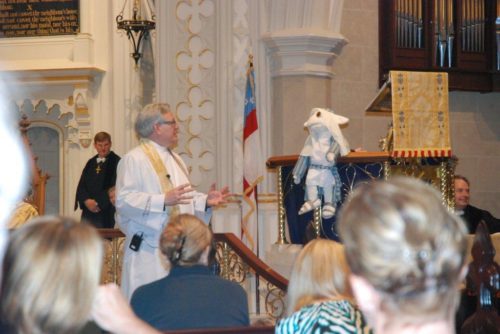 Grace’s rector, the Rev. Canon Michael Wright, conducts the children’s sermon during the Family Eucharist on Sunday, Sept. 30, with a little help from puppet, Bartholomew the Sheep (on the arm of Rob Donehue, director of youth & young adult ministries). Photo/Nancy Ezell Suggs

Bartholomew, the rowdy sheep puppet (on the arm of Rob Donehue, director of youth & young adult ministries) who pokes fun of Father Michael for the benefit of the congregation’s littlest members, asked the children what was different about church today. Small, awed voices piped, “tall” and “big.” But when he asked what was the same, they all shouted, “The people!”

“At the 9 o’clock, there was a whole lot of life, and excitement with the children,” said Hawkes. “It was nice to see that you can get that in the big church too.”

Grace has been in a prolonged period of growth. A 2010 survey showed that one in four have been members here for fewer than five years, and one in two for fewer than 10 years.

In 2005, this flourishing parish began to raise funds to expand its facility. But when architects were called in, they had some distressing news to report, Ezell Suggs said. “The steeple was leaning six inches, the walls were listing. The focus of the campaign changed from expanding ministry to saving our church home.” 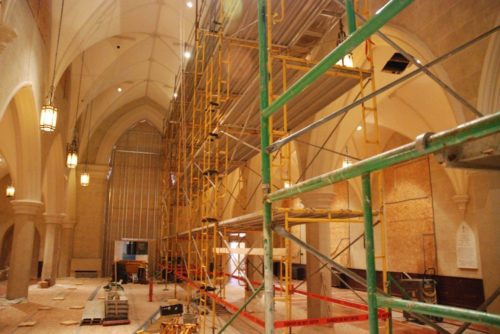 After the 2011 Virginia earthquake, Grace Church’s clerestory walls were delaminating, separating internally like a zipper. Bolts and plates were used as clamps, with flowable grout used to fill all of the voids, solidifying the entire wall. Weak areas were reinforced and the building’s historic wood timbers were secured. Including all of the bolts and grout holds, over 2000 holes were drilled to stabilize the clerestory walls. Photo/Nancy Ezell Suggs

The first phase of the project, a $12 million renovation of the church tower, began in 2008 and had just been completed when the earthquake struck. The tower remained strong, but sensors indicated that the stucco-over-brick clerestory walls were delaminating, separating internally like a zipper. The problem was serious enough to condemn the church as well as to displace the adjacent church school kindergarten.

On Easter Day, Grace launched a new $5 million capital campaign: Home to Grace. The funds have been used to plate and regrout the clerestory walls, and also will be used to pay down the remainder of the loan for the tower work.

Despite its displacement, new members have continued to pour into the historic church community for its welcoming environment and energetic attitude. For many, Sunday was their first time entering the historic sanctuary and worshiping from pews instead of folding chairs, and a first chance to see the famous stained glass windows.

Engineer Joel Anderson teaches Sunday school and is deeply committed to Grace’s Episcopal Youth Community. Although he acknowledges that the church is its people, not its walls, “We can be a wonderful thriving church in a warehouse, but we want to grow. And it’s hard to grow when you’re crammed in Hanahan Hall. We’re the beneficiaries of a wonderful building, and we are caretakers for the next generation. Our church inspires us in our faith. The high ceilings, the beauty of it, you can’t walk in there without feeling like you’re in a holy place. You have to look up.” 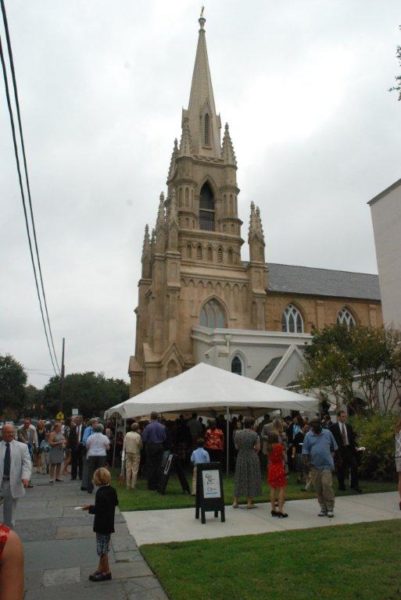 Members gathered in a special tent Sunday following the 9am Family Eucharist. The church’s congregation has been a long period of growth, and is still growing, despite being displaced from its church home for more than a year. During its time in the wilderness, communities of all faiths offered their churches, chapels and synagogues to Grace’s grateful congregation for services, baptisms, funerals, festivals and weddings. Photo/Nancy Ezell Suggs

Elizabeth Spitz, one of Grace’s young adult members, has been a loyal parishioner since the third grade. As a youth acolyte, one of her favorite memories is of the late rector explaining the concept of deliberate imperfections in church architecture, and pointing out the crosses painted on the ceiling, where one is missing. “I look at that missing cross every time I go up for communion, and I have missed seeing it.”

She adds, “Our church is beautiful, and I admire all of the things people do to make it and keep it that way: the flower guild, the embroidered kneelers, the people that make it unique and different. There are kneelers for branches of the armed services, or depicting scenes from the Bible or from our church stained glass windows. People really care about the building and the way it looks and making it beautiful.”

Judging from the throngs of delighted children, grandparents, and parents chattering between services, this parish agrees, “It’s good to be home.”

— Sarah Moïse Young is a freelance writer and editor in Charleston, South Carolina, and a 25-year member of Grace Episcopal Church.