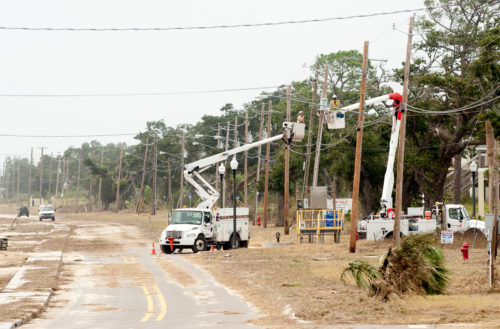 Crews from Mississippi Power work to repair damage from Hurricane Isaac along a road in Waveland, Mississippi, August 31, 2012. REUTERS/Michael Spooneybarger

[Diocese of Mississippi, Gautier] Episcopal clergy contacted along the Mississippi coast agree that the devastation caused by Hurricane Isaac could have been much worse.

From Pascagoula to Bay St. Louis, a 50-mile stretch, the Diocese of Mississippi’s six coastal churches sustained little damage from the category-1 hurricane that drenched the Gulf Coast between Aug. 28-30.

“We are very happy to report that all our churches made it through Hurricane Isaac intact,” said Diocese of Mississippi Bishop Duncan Gray, III.

St. Peter’s by-the-Sea in Gulfport experienced the worst problems when water seeped into the parish hall on Aug. 30 during the brunt of the rainfall.

“We had about 40 volunteers with wet vacs who came and cleaned up about 2 to 3 inches of water,” said the Rev. Scott Williams, deacon at St. Peter’s who coordinated the work crew. 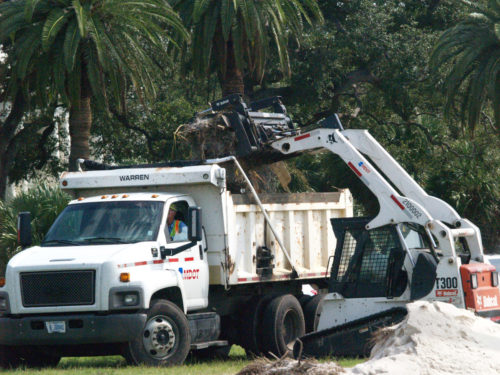 A bobcat front end loader drops storm debris into a dump truck on Highway 90 near the gate to Keesler Air Force Base in Biloxi. Clean up efforts are in full swing across the Mississippi coast today. Photo/Scott Lenoir

Although the Mississippi coast did not experience the same damage and flooding as parts of Louisiana, hundreds of residents still were displaced into shelters due to power outages, high winds, and heavy rainfall that resulted in the flooding of homes and businesses in low lying areas near the beaches and along several rivers.

Rainfall amounts on the coast varied from 10 to 17 inches.

Prior to the storm, the Rev. Carol Spencer, chair of the diocesan disaster and preparedness task force, advised all congregations to “hope for the best and prepare for the worst.”

“Our task force stayed in communication with each other,” said Spencer, a deacon at St. Andrew’s Episcopal Cathedral in Jackson, Mississippi. “We were lucky to have two members of the task force present on the coast who were able to report firsthand what happened.”

Spencer estimates that between the diocesan office and task force members, at least three calls were placed to each Gulf Coast congregation in advance of and during the storm.

The Rev. Cathy Halford, an Episcopal deacon and pastoral care coordinator for the task force, partnered with Catholic Charities of Jackson to answer the call for supplies from people weathering the storm in the Mississippi Coliseum in Jackson.

Episcopal Relief & Development has been standing ready to assist as diocesan teams are able to assess the situation.

“Every step along the way, Episcopal Relief and Development was kept informed as to our work and the needs we had,” said Spencer. “Also, we appreciate the many calls we got from dioceses across the nation who checked on us. We will continue to monitor the needs of churches and their people as assessments are being made and needs are being expressed.”

Meanwhile, at a nationally televised press conference on Sept. 1, Secretary of Homeland Security Janet Napolitano assured Mississippi coast residents that the Federal Emergency Management Agency will follow through with clean up efforts and relief.

The conference at the No. 1 fire station in Bay St. Louis was attended by several Mississippi leaders, including Mayor Les Fillingame. “Our biggest story coming out of this storm event is the damage we didn’t have,” said Fillingame.

— The Rev. Scott Lenoir, editor of The Mississippi Episcopalian and member of the diocesan disaster and preparedness task force, is present on the Mississippi coast to report firsthand on Isaac’s impact.