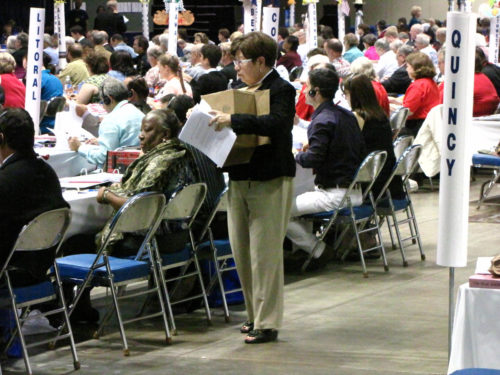 The Joint Standing Committee on Program, Budget and Finance July 10 proposed a budget for the Episcopal Church in the 2013-2015 triennium that its chair called “a good budget for the church.”

The proposed budget is available here.

Both the House of Bishops and the House of Deputies must approve the budget, agreeing on any changes supported by one house or the other. The vote is scheduled for July 11. The approved budget will go into effect on Jan. 1.

“Our work has been hard, but it has been rewarding,” PB&F Chair Diane Pollard, deputy from New York, told a joint session of the House of Bishops and the House of Deputies. “We felt that at the end of the day, despite the very short and tight schedule that we had, we were able to produce what we believe is a good budget for the church.”

Still, she said, the current budget-planning process must change.

It is “complicated and takes place in a compressed time-frame,” she said, adding that the shorter length of this convention “required that we complete the budget within 36 hours of our final hearing.” Many resolutions that included requests for funding had been considered before the committee had to complete the budget.

“We wish to reiterate our desire for an ongoing budget process that takes place throughout the triennium and involving the Executive Council, the [chief operating officer] and staff of the Domestic & Foreign Missionary Society, and the Joint Standing Committee on Program, Budget and Finance,” Pollard said, urging council to commence such a process as soon as possible.

The spending portion of the budget is allocated according to the Anglican Communion’s Five Marks of Mission, and the categories of administration and governance.

“All categories are to some extent arbitrary, and PB&F has placed certain expenses in certain categories recognizing that others might choose different categories,” Bishop of Maine Steve Lane, PB&F vice chair, told the joint session.

The budget assumes $73.5 million in commitments from the church’s dioceses (line 2), nearly $4 million less than that in the current triennium. That total is based on keeping at 19 percent the amount that the church asks dioceses to annually contribute to the church-wide budget.

“Although there has been considerable discussion about reduced askings and changes in future askings, PB&F believes 19 percent is appropriate to maintain the work of the church as it considers restructuring,” Lane said.

PB&F acknowledged in its budget document what it called significant downward pressure on income in some parts of the church.”

The 2013-2015 diocesan income total also anticipates a one percent annual decrease in diocesan operating income, an assumption that Episcopal Church Treasurer Kurt Barnes had told the budget committee earlier in the convention was conservative.

“We recognize that some dioceses will not pay their full asking regardless of the level of asking for a variety of reasons,” the committee said in the budget document.

While the budget asks for 19 percent from the dioceses each year, not all dioceses give the full amount and thus the projected diocesan income is forecast, in part, on giving trends. For instance, Barnes told the committee earlier in the convention that the average rate of giving in 2012 has been 15 percent, with the asking at 19 percent.

Just more than 41 percent of the dioceses and regional areas committed to contributing the full amount in 2012. A list of diocesan commitments for this year is here.

PB&F recommends the church reconsider the asking formula and “that the Episcopal Church engage in a theological conversation about giving to the church‐wide budget as it considers restructuring.” 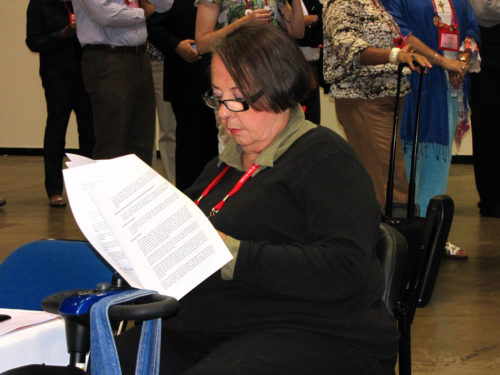 Kay Bishop, a Diocese of California alternate lay deputy, begins to study the Joint Standing Committee on Program, Budget and Finance’s proposed 2013-2015 budget July 10 shortly after the committee presented it to the House of Bishops and House of Deputies. ENS photo/Sharon Sheridan

The budget revenue also includes a five percent draw, or dividend, on the income from the church’s approximately $215 million in unrestricted invested assets. The draw amounts to $25.5 million, compared with $27.5 million in the current triennium (line 3).

The unrestricted investments are expected to annually earn eight percent. The draw is a half-percentage point lower than in the 2010-2012 budget. Because of the way the formula is calculated, the portion of the investment income from which the draw comes is the actual results in 2007-2011, according to the commentary in the budget at line 3.

In addition, the budget will draw another $4.1 million of the income from unrestricted assets to pay for a new development office (line 4). It is meant to be a one-time grant. The office is expected to be fully staffed and generating money for the church that exceed the office’s operating costs by the end of the triennium, the budget document says.

The development office draw would put the total dividend from investment income at 5.8 percent.

Pollard said the committee is persuaded of the need for an office that would “support Episcopalians with significant resources in making gifts to particular ministries for which they have a deep and abiding passion.”

However, she acknowledged that “earlier efforts at creating such an office have been haphazard and underfunded and that, as a result, some in the church regard the Development Office with a skepticism verging on cynicism.”

The rest of the budget’s income comes from rental of 3.5 floors of the church center in New York, General Convention income from registration and exhibitor fees, other event and program fees and other small income sources.

The budget anticipates a reduction in the churchwide staff of 12 positions or 10.75 full-time equivalents. Some of those positions are currently vacant and the other reductions will be allocated by program heads and the chief operating officer, PB&F said.

The budget the church’s Executive Council proposed to PB&F called for 135 churchwide positions plus 21 in the work of Episcopal Migration Ministries that is supported by money from government contracts.

In 2009, when PB&F made a $23 million cut from the budget that Executive Council had proposed, approximately 40 staff positions were either eliminated or reduced. In the 1995-1997 triennium, the staff level was at 225.

Spending in the 2013-2015 budget is structured around the Anglican Communion’s Five Marks of Mission, using the template of an alternative budget Presiding Bishop Katharine Jefferts Schori proposed in June.

The 76th General Convention directed (via Resolution D027) that the 2013-2015 budget be organized according to the Five Marks of Mission.

To conform to canonical requirements to designate spending in the areas of canonical, corporate and program, each expense line is coded to one of those three categories, and the budget’s enabling resolution (A005)  summarizes the spending in that way.

Canonical expenses are funded at $20.1 million, corporate at $33.9 million and program at $57.3 million. The amounts for each category in each year are specified in the budget resolution.

A major new feature of the budget includes a block grant in each of the five marks of mission for new work. The committee sees the grants as a way to “create collaborative partnerships with dioceses and congregations” for which the Episcopal Church will provide seed money and/or matching grants, along with staff support and expertise, according to Lane. The precise planning of the program and grants is left to Executive Council and the church center staff, the committee said.

Even though not every new program will be successful, the committee said, it urges “experimentation” with a full accounting of the results to the next convention.

The grants include $2 million for a “Mission Enterprise Zones” program and for church planting (line 27), $1 million for young Episcopalians to engage in missionary work (line 79) and for Episcopalians to engage in work to eradicate domestic poverty (line 108). There is also $1 million to support the work of Province IX (line 61) and $500,000 to help create and foster networks and diocesan and congregational efforts toward environmental sustainability (line 122).

The Mission Enterprise Zones stems from Resolution A073 proposed by the Standing Commission on the Mission and Evangelism of the Episcopal Church. The fund would give grants of up to $20,000 each to dioceses to form Mission Enterprise Zones, “defined as a geographic area, as a group of congregations or as an entire diocese committed to mission and evangelism that engages under-represented groups.” Until the next convention, the zones would be granted greater freedom as authorized by the bishop in consultation with diocesan leadership regarding the designation of “congregation” status, traditional formation for and use of ordained leadership and the use of authorized texts for principle worship gatherings.

Other highlights in the budget include:

* Restoration of funds for the work of formation and vocation, including campus ministry grants and for youth gatherings such as the Episcopal Youth Event and for lifelong Christian formation. (2013-2015 amount budgeted is $2.8 million in lines 63-71).

* Increases the total amount of money for the church’s four aided Indian Country dioceses (Alaska, Navajoland Area Mission, North Dakota and South Dakota from just more than $4 million to $4.9 million (lines 149-153), and leaves all other grants to Haiti, the Virgin Islands, Guam, Taiwan, and the aided dioceses in Province IX at current levels (lines 146,147 and 154-163).

* Continued commitment of 0.7 percent of the budget’s total expenses to fund work towards achieving the Millennium Development Goals, and continued designation of that money to Episcopal Relief & Development. The percentage amounts to $748,208 (line 243a).

* A cut in funding for the church’s Committees, Commission, Agencies and Boards, which study issues canonically mandated to them or referred to them by convention, from the current $1.08 million to $630,449. The new total would come in the form of a block grant to be allocated by Executive Council in consultation with committee chairs and church staff according to the work and schedule of the individual CCAB (line 281).

* $200,000 to support conversations about restructuring the church (line 282). This is an example of PB&F allocating money for activities whose enabling resolutions had not yet completed the legislative process when the budget was due. The convention’s committee on structure has recommended Resolution C095s that would have a 24-member task force gather ideas on structural change and hold a meeting of representatives from each diocese to hear what the group will recommend to the next meeting of convention. However, PB&F allocated half the amount C095s requests.

* A cut of $487,750 from the current triennium in the money allotted for meetings of Executive Council, which carries out the programs and policies adopted by the General Convention, according to Canon I.4 (1)(a). The committee anticipated that council would have to conduct one of its three annual meetings online (line 290).

* Restoration of $165,000 for the General Board of Examining Chaplains, which prepares and oversees the evaluation of an annual examination of those seeking ordination as priests (lines 313a-e). Council did not specifically fund the board in its proposed budget. PB&F said that policy about the board “is a matter best left to the normal legislative process” of convention. The committee noted that its predecessors had asked for an evaluation of the board in 2009, “but that request was not funded or adequately communicated.” This time around, “all involved seem much clearer about the need for evaluation, and it is hoped such evaluation can be funded from existing resources or in partnership with other interested parties,” the committee said.

* An increased rate for reducing the debt resulting from the renovation of the church center from $7.7 million to $7.9 million (line 329).

* A pool of money for staff salary increases and cost of living adjustments of 1 percent, 1.5 percent and 2 percent respectively in the three years of the triennium. Staff costs in the budget also anticipate an eight percent annual increase in health insurance and the committee recommends that the chief operating officer and senior staff review current insurance policy and plans. (spread throughout the budget).