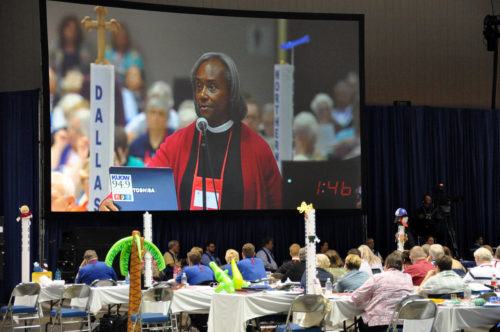 The Rev. Carla Robinson, a transgender priest and deputy from the Diocese of Olympia, addresses the House of Deputies July 9 during their debate on gender identity and the rights of transgender people. ENS photo/Matthew Davies

[Episcopal News Service – Indianapolis] The House of Deputies on July 9 concurred with the bishops to offer support for the transgender community by adding gender expression and identity to two canons that prevent discrimination. One makes clear that the ordination discernment process is open to them, and another guarantees their equal place in the life, worship and governance of the church.

Debate on Resolution D019, which addressed the canon titled “Extending the Rights of the Laity,” drew speakers who told of the need to make explicit the church’s welcome – using its slogan “The Episcopal Church Welcomes You” – to those who are transgender.

The Rev. Carla Robinson, deputy from Olympia, spoke as a transgender person of the importance of specifically including people like her. “By including gender identity and gender expression in this canon, you will rightly name us,” she said. “By naming us in this canon we as a church are continuing to incarnate the Christ-like welcome that is central to our way of faith, and to make it clear to the whole world that the gospel of God’s love in Jesus Christ is for everyone.”

Deputy Natalie Vanatta of Kansas said that as a lesbian her rights as a member of the church are protected under this canon, but they currently are not for transgender people. She said, “The trans community has stood and fought for the rest of the LGBTQ community time and time again, and I would not be living out my baptismal covenant if I did not do the same for them now.”

The Rev. Jim Lewis, deputy from South Carolina, said he found the terms being used confusing. “For some here that terminology may be perfectly clear, but to be honest, if I have to go back to my congregations in South Carolina I will be hard pressed to define for them exactly where the boundary is, or if there is a boundary, in terms of gender identity and expression,” he said. “By this turn of phrase, is there in fact anything that is out of bounds? Nowhere have I seen the explanation of these terms or a theological understanding justification for this expansion of category.”

A motion by the Rev. Eric Turner of Central Florida that would have deleted reference to the list of all protected statuses in favor of a blanket statement of non-discrimination was defeated.

A companion resolution, D002, affirms the openness of the discernment process for ordination by adding gender identity and expression to the same list of protected groups expressed in D019. The House of Deputies at the 2009 General Convention adopted a similar resolution that didn’t clear final passage by the House of Bishops.

In other action, deputies passed Resolution A051, which continues for another three years the trial use of the 2009 revision of the church calendar of daily saints and remembrances titled “Holy Women, Holy Men.” It also calls for the Standing Commission on Liturgy and Music to continue the process of revising the document and to continue to gather responses to it.

Deputies also adopted Resolution A050, authorizing a task force to study marriage. It calls for creation of a 12-member task force to study marriage, including needs for pastoral responses by clergy for same-sex couples in states where civil marriage is legal, as well as issues “raised by changing societal and cultural norms and legal structures.” A vote by orders on this resolution was called, and 89 lay deputations and 92 clergy deputations (out of 109) voted yes.

The deputies also adopted a variety of other resolutions, including: