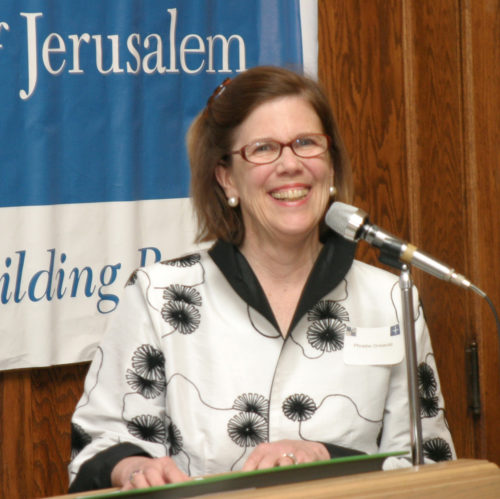 [Episcopal News Service] Last fall, I took a group of pilgrims to see the holy sites and the work of the Episcopal Diocese of Jerusalem. The trip was sponsored by the American Friends of the Episcopal Diocese of Jerusalem. What inspired our group the most was the steadfastness of those – Christian, Muslim and Jew – serving, and being served, by the health and education institutions of the diocese, as well as the work being done in and through its parishes.

We saw God in the image of the young blind teacher at the Arab Episcopal School in Irbid, Jordan, holding the hands of a tiny blind girl while teaching her to read. The teacher had been trained in that very school and returned to pass on the gift of reading that she had learned there.

We saw God in another young blind girl standing shyly but bravely before our group of pilgrims to sing us a song she had written in gratitude for the love of her parents and the love of the school, which was nurturing her into a full life.

We also saw God in our faithful Anglican brothers and sisters of the Diocese of Jerusalem, as they struggle for human dignity in a situation that could rob them of their own agency. However, because of the strength of their faith in God’s love for all humanity, as expressed today by the church, they are able to reach out in hospitality and acceptance of others, including ourselves from the U.S., and be teachers, healers and reconcilers. God is teaching us all through them what a new humanity could look like. We are called to suffer and stand with the people of the Diocese of Jerusalem in order to know what our strength and power is to be people who passionately love life, each other and the God who made us.

I have heard the principal of St. George’s School in East Jerusalem say that when he wants to find a person well-trained, tolerant and open-minded to work with, he intentionally looks for someone who went to an Anglican school. This is because schools in the diocese teach both Muslim and Christian children, both the Koran and the Bible. Technical schools prepare students to work in their local communities. A sense of dignity is restored to young Christian people when these institutions are known in the community as part of the Diocese of Jerusalem. The Diocese of Jerusalem also plays an important role in calling interfaith meetings and in bringing communities, particularly Muslim and Christian, together to live in harmony.

The Holy Land is a place dear to God’s heart. Muslims, Christians and Jews love the city of Jerusalem. God’s presence is left behind there through the historic holy sites of the three Abrahamic siblings. These sites move us deeply to know better God’s intent at different times in history. For centuries, Jerusalem has been sacred to peoples as the “Center of the World.” This relationship between faiths and a place is a mysterious happening. The land has called to people through many ages to seek the will of God. I believe that we are called to the Holy Land today to join the people there so that we with them can undergo the transformation to become the humanity God desires.

I believe that God has chosen this place. It shapes people into the people that God yearns for us to be. In the mix of intensely held beliefs and points of view, there is a call to find common ground where diversity is valued and life is lived under the banner of love. It is all there, leaders of sacred and secular institutions and faithful people. All of us of good will are trying to work it out, but we just don’t have it right yet.

Political change may not come soon. I am not without hope; however, I do not see signs that a life of all together in peace is within reach, given the current position of the Israeli government and policies of the U.S. government. What I do see is that we, as a church, are called to do everything we can to support our brothers and sisters in Christ during this very difficult time in their history. We do not know how to solve the problem, but we must not walk away. Each of us must carefully discern what we are called to do to help the diocese — the region — right now, and for the long haul as well. In these days, we have opportunity to work as we are each called with the burning hope that peace will be a reality. I pray we will continue, in strength and with God’s grace, to participate in that work.

— Phoebe Griswold is an AFEDJ advisory board member and its outgoing president.