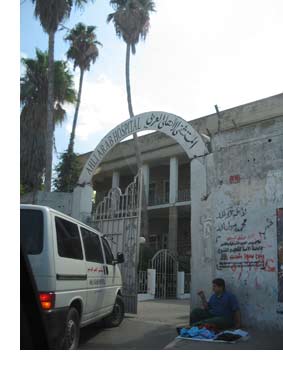 [Anglican Church of Canada] Archbishop Fred Hiltz, primate of the Anglican Church of Canada, has asked Prime Minister Stephen Harper to re-commit funds to the United Nations Relief and Works Agency so it can continue to support Al Ahli Arab Hospital in Gaza City, Gaza Strip. The hospital is run by the Episcopal Diocese of Jerusalem and serves about a million people, regardless of religious or ethnic background.

“So many people are turning to us in desperation,” wrote Hiltz in his letter to Harper. “Let us not be blind to their suffering nor deaf to their cry.”

Suhaila Tarazi, hospital director, recently informed Diocese of Jerusalem partners that UNRWA abruptly had ended its financial contractual support of the hospital in May. The reason given for this decision was UNRWA’s diminished budgets due to non-payment of pledges from donor countries.

In his letter to Harper, Hiltz wrote, “UNRWA, not Hamas, nor the Palestinian authority is the sole provider of education and emergency medical services to 2/3 of the population of Gaza who are refugees.”

The Ahli Arab Hospital has a capacity of 80 beds with an occupancy rate around 78.60%. Its departments include general surgery, internal medicine, emergency and ambulance services, orthopedics, urology, gynecology, and obstetrics.

“The hospital is a haven of peace in the middle of one of the world’s most troubled places,” said Dr. Andrea Mann, General Synod’s global relations coordinator.

“All aspects of life in Gaza are affected by the political situation between Israel and Palestine, especially through restrictions on the movement of materials, medicines and people. Yet, Al Ahli Arab Hospital continues to provide some of the finest medical care available in the region.”

Both Hiltz and Mann have visited the hospital and observed the work of volunteers and staff.

The Anglican Church of Canada contributes to the Ahli Arab Hospital as well as other ecumenical services to Palestinian refugees in Gaza and elsewhere. Soon General Synod will strengthen overall assistance to diocesan health ministries.

Bishop Suheil Dawani, Diocese of Jerusalem, and Archbishop Hanna Mouneer, Province of Jerusalem and the Middle East, have commended the Primate’s letter and this prayer to all supporters:

“O God of wholeness and healing, we lift up the staff and patients of the Ahli Arab Hospital in Gaza. Strengthen and guide management and staff as they treat the poor and injured, especially in this time of deep crisis and uncertain future. Bless the patients who receive care with Your healing touch. Give us all a renewed awareness of the blessing of health and grant us courage to support Ahli Arab Hospital in its work.”

The full text of the Primate’s letter is below.

— Ali Symons is General Synod web writer for the Anglican Church of Canada.

As Primate of the Anglican Church of Canada I write out of concern for the termination of United Nations Relief and Works Agency (UNRWA) support for the Al Ahli Arab Hospital, Gaza. This hospital is an Anglican health centre of the Episcopal Diocese of Jerusalem and non-sectarian in its services. Having visited the hospital in 2009 with The Rt. Rev. Suheil Dawani, the Anglican Bishop in Jerusalem, I can attest to the truth that this facility provides care without prejudice to any religious or ethnic community, or irrespective of gender, social class or political affiliation. Staff are very competent and extraordinarily devoted. The consequences of the hospital’s closure are devastating for more than one million people, of whom more than half are women and children in desperate need of emergency care and primary treatment.

The Government of Canada and the Anglican Church of Canada have for many years been important sources of support for the valuable work of the Al Ahli Arab Hospital. The Government of Canada continues to commit funds to UNRWA’s Emergency Fund. Likewise, the Anglican Church of Canada continues funding for ecumenical services to Palestinian refugees in Gaza and elsewhere, and will soon strengthen overall assistance to diocesan health ministries.

UNRWA, not Hamas, nor the Palestinian Authority, nor any other government is the sole provider of education and emergency medical services to 2/3 of the population of Gaza who are refugees. Not unlike Canadian provinces, UNRWA designates more than half of its budget to education and health care.

Prime Minister, I ask you to re-commit Canada to the generous funding of UNRWA, and to its 2012 emergency programs in Gaza, so the Al Ahli Arab Hospital is restored to full service. I urge you to act expeditiously.

Please know of my thanks anticipating your willingness to act with compassion in this matter of urgent humanitarian need. So many people are turning to us in desperation. Let us not be blind to their suffering nor deaf to their cry.