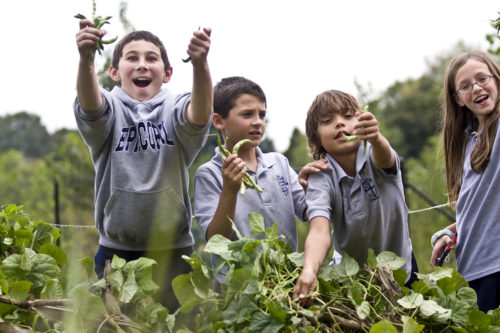 Students at the Episcopal School of Knoxville display beans grown in their garden as part of Episcopal Relief & Development’s Abundant Life Garden Project curriculum, which will be used during the children’s program at General Convention in Indianapolis in July. Photo/Kelly Norrell

[Episcopal News Service] While adult deputies and bishops conduct the business of General Convention this summer, the children gathered at the Indiana Convention Center in Indianapolis will train to become mission ambassadors to their congregations back home.

The Children’s Ministries of the Episcopal Church and the Diocese of Indianapolis are partnering with the diocese’s Waycross Camp and Conference Center in Morgantown, Episcopal Relief & Development and National Episcopal Health Ministries to offer the children’s program for General Convention. Children from birth through fifth grade may participate from July 3-12, and may attend for all or part of the time depending on when they are at convention.

“One of the strengths of this curriculum is that a child can learn something just from a short time,” said agency formation consultant Cindy Coe, who developed the curriculum. Her 8-year-old son will attend the program at convention for four days.

“Of course, if they attend for a longer time, it’s just that much deeper,” she said. “The purpose is to engage children in the work of Episcopal Relief & Development using images of the garden.” 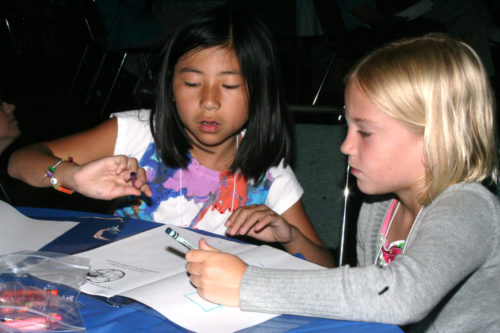 Children will once again have an area reserved for them to participate in worship services at General Convention. Photo/Paul Hausman

The children’s program is open during all committee and legislative sessions, but it’s not just child care, said Ruth-Ann Collins, Episcopal staff officer for lifelong Christian formation. “This is far from a babysitting experience. It’s a full faith-formation experience for children.”

Program leaders want children to know, “Wow, we’re part of a bigger church than just our little church,” she said. “They get to meet kids from different parts of the country.”

Participating children will attend the daily convention Eucharist. “They’re going to have their own spot up front so that they can see what’s going on and really feel like they’re included in it,” Collins said.

They’ll also receive a behind-the-scenes tour of the worship space. “Some of these kids have probably never even been in a sacristy,” she said.

In choosing the curriculum, Collins said, the thought was: “Let’s get these kids to be ambassadors.” The hope is that they’ll return home with their program “tool kits,” speak to their congregations or church leaders and perhaps demonstrate one of the projects.

“It’s a real take-away,” she said. “Children can do mission and ministry, and that’s what we’re trying to show people.”

The curriculum encompasses units on water, seeds, soil, animals and harvest, Coe said. Each of the five modules includes Old and New Testament lessons, a “story from the field” lesson and a meditation.

“We can’t take children on an airplane and take them overseas and show them what Episcopal Relief & Development does, but we can show them in their own garden what we do overseas,” she said. By planting seeds and tending a garden, children “really do understand first-hand” what it’s like to have to grow your own food.

In one of the program’s most successful activities, children walk 10 minutes to get a bucketful of water, Coe said. 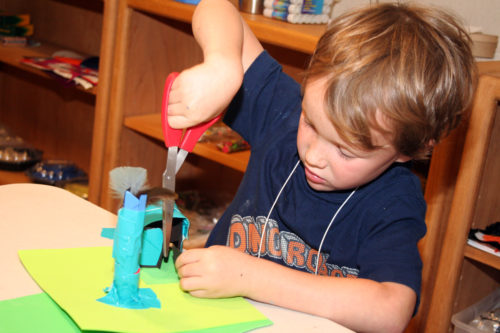 Children through fifth grade who attend General Convention can participate in their own faith-formation program. Photo/Paul Hausman

“It starts out great, they go frolicking along,” she said. Children from the Episcopal School of Knoxville in Tennessee, for example, walked over a rough nature trail to a freshwater spring.

“The problem is, they had to then walk uphill to get the water back to the garden. We always unwind that process, and they always say it’s fun. Then I say, ‘Would you like to have to do that every day?’ and they say, ‘No.’ They always come back with a wonderful appreciation of a fresh glass of water that they can get just by turning on the tap.”

Overall, she said, program participants “come to an appreciation of things many of us take for granted.”

The curriculum has been used with preschoolers through seminary students, in church schools and vacation Bible schools, and even overseas.

At General Convention, the children will be divided into different age groups. During the program, they will visit the Waycross camp twice. Waycross counselors and counselors in training will be among the children’s program staff.

“That’s a real intentional partnership, where we do leadership development for young people that are going to be camp counselors,” Collins said.

National Episcopal Health Ministries was a natural connection for the program, Collins said. “We’re all trying to work to make children aware of good health, what it means to live a healthy life. They’re going to actually take our children on health walks” and will talk to them about healthy lifestyles.

“We have our own chef, to make sure that they get nutritious food,” she said. And the program will have a nurse on staff. 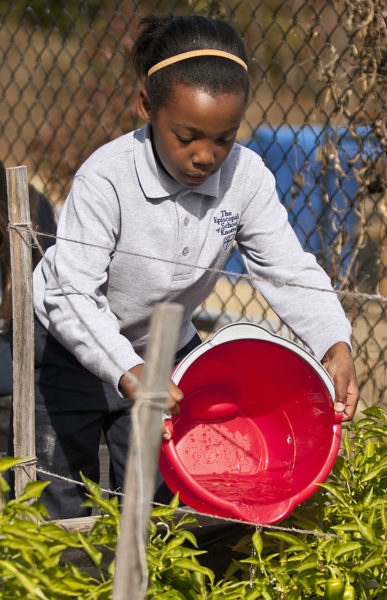 A student at the Episcopal School of Knoxville pours water on plants in the school’s garden, part of Episcopal Relief & Development’s Abundant Life Garden Project. The curriculum, which will be used during the children’s program at General Convention, teaches children to appreciate things like clean water that they normally take for granted in everyday life. Photo/Kelly Norrell

Beyond serving the youngsters, Collins noted, “By having an intentional children’s program, it will help to make the opportunity to serve as a deputy more accessible to people with young children. … It allows someone of that age group to come and be part of the governance of the church without having the burden of, ‘Where do I leave my child for 10 days?’”

“It also helps deputies who are grandparents and are the primary caregivers,” she said.

Having the children at convention and present during worship, she said, “really is a visual way of reminding the General Convention floor of the future of the church. … What decisions we make today are impacting where the church will be for these young children as they grow up.”

The children’s presence is a reminder to ask: “How are we being good stewards of the future?” she said.

A registration form for the General Convention children’s program is available here. Cost is $65 per day, or $625 to $650 for all days, depending on the child’s age.

The Abundant Life curriculum can be downloaded free here.