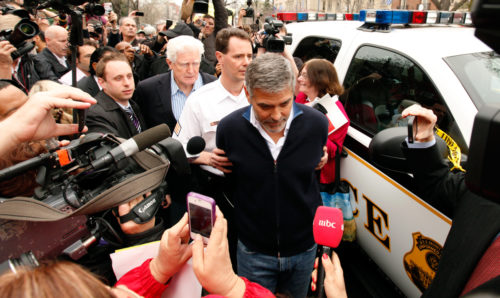 Actor George Clooney is arrested for civil disobedience after protesting at the Sudan Embassy in Washington March 16, 2012. Clooney was protesting the escalating humanitarian crisis in Sudan. REUTERS/Kevin Lamarque

[Episcopal News Service] Actor George Clooney’s March 16 arrest, along with nine other activists, outside the Sudanese Embassy in Washington, D.C., sparked headlines around the world, drawing international attention to the unfolding humanitarian crisis in the troubled border region between Sudan and South Sudan.

Protesters who had gathered to take part in the National Day of Action for Sudan rally cheered Clooney as police fastened flexicuffs around his wrists and drove him off for processing.

Later that afternoon, after posting and forfeiting a $100 bond, Clooney was free to go home. But for Episcopal Church of Sudan Bishop Andudu Adam Elnail, who also spoke at the rally, there will be no such homecoming. 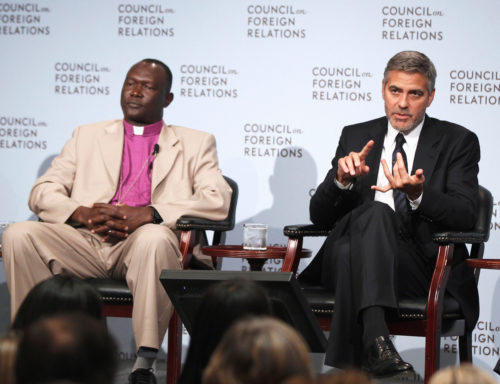 Elnail, leader of the Diocese of Kadugli in South Kordofan, Sudan, has been in exile since last June, when Sudanese president Omar al-Bashir’s Sudan Armed Forces attacked Kadugli, looting churches, routing priests and burning All Saints Cathedral, the diocesan offices and guesthouse and Elnail’s own house to the ground.

Granted asylum in the U.S. in January, Elnail is now based in Denver, Colorado, where the Colorado Episcopal Foundation is helping him minister to and advocate for his people from afar. Other priests from the Diocese of Kadugli have taken refuge in Egypt, Uganda, Kenya and South Sudan.

In April, Elnail plans to travel to Yida, a camp across the border in South Sudan where many from his diocese have taken refuge. There, he said in an interview following the rally, he hopes to help clergy set in place new strategies for helping people in times of war, “encouraging them, raising their morale and encouraging them to stick to the Bible.”

He’s also raising funds to build a shelter of local grass where refugee children can conduct their studies out of the blazing sun. For those remaining in Sudan’s border states of South Kordofan and Blue Nile, the most pressing problem, after the bombing, is the food shortage Elnail predicted last summer.

In the immediate aftermath of the June 5-6 attacks on Kadugli, Elnail warned of a famine this year, as the SAF bombardment had displaced people at the start of the planting season.

“There is hunger coming now and already people are hungry,” he said.

“Once you don’t plant anything, there’s nothing you’re going to harvest,” said Jimmy Mulla, president and co-founder of Voices for Sudan, a U.S.-based coalition of Sudanese-led organizations dedicated to resolving the humanitarian crisis in Sudan, during a March 17 interview at St. Paul’s Episcopal Church in Alexandria, Virginia. Mulla, who also spoke at the March 16 rally, described the famine in the border areas of South Kordofan and Blue Nile as part of a process of ethnic cleansing. “You displace [people], they flee, they have nothing planted, and now you stop aid getting to them.”

Sorghum, one of the region’s subsistence crops, was “70 percent what it was last year,” Sudan expert Andrew S. Natsios told a group of Sudanese nationals and advocates who’d gathered March 17 at St. Paul’s to hear him speak.

Natsios, author of “Sudan, South Sudan, and Darfur: What Everyone Needs to Know” (2012, Oxford University Press), served from 2001-2005 as administrator of the U.S. Agency for International Development, and as a special envoy to Sudan during the Bush administration.

“There’s unrest on the streets, because people aren’t eating well,” he said, noting that hunger, driven by rising food prices, also was a significant factor in the uprisings of last year’s Arab Spring.

When South Sudan became an independent country last July 9, there was widespread optimism about the future, and al-Bashir himself attended the celebrations.

Richard Parkins, executive director of the American Friends of the Episcopal Church in Sudan, a board member of Voices for Sudan and a parishioner at St. Alban’s Episcopal Church in Washington, D.C., said in a March 16 interview that many of the troubles boil down to “provocative rhetoric and pernicious regimes.”

The fledgling state of South Sudan is facing problems with governance, infrastructure and the delivery of services, Mulla said. The government has so far been disappointing:  “People were expecting more.” Inter-ethnic fighting also has flared up, particularly in the state of Jonglei.

A member of the Sudanese congregation at St. Paul’s, Alexandria traveled to Jonglei last summer and described the “utter lack of a police force,” said the Rev. Ross Kane, assistant rector, during a March 18 telephone interview.  (St. Paul’s has had a relationship with the Diocese of Renk on South Sudan’s northern border since Episcopal Church of Sudan Archbishop Daniel Deng Bul did his field work there as a seminarian at the Virginia Theological Seminary.)

“Folks had to have an armed escort to move from village to village,” said Kane, “and a de-armed village had been raided…”

In the north, al-Bashir is presiding over the weakest government since Sudan’s independence in 1956, Natsios said. The government is facing a massive budget deficit caused in part by the loss of oil revenue to South Sudan, leading to widespread layoffs in government agencies. Corruption is rife, and there was a virtual mutiny in the Sudan Armed Forces recently, when 700 officers signed a petition to say they would not attack the south again, Natsios said: “I think Bashir is in very deep trouble.”

Caught betwixt and between are the border states of South Kordofan and Blue Nile, administered by north Sudan but sympathetic to the south during the civil war. These states have so far been denied the option of deciding their own governance, as set out in the Comprehensive Peace Agreement of 2005.

Last June, just ahead of South Sudan’s independence, the Sudan Armed Forces began bombing the border regions. The Sudanese government is now refusing to allow aid into these areas.

In danger of losing control of South Kordofan and Blue Nile, al-Bashir has “decided since he can’t win militarily, he’s going to starve everyone to death,” Natsios said.

Many of Sudan’s Christians have fled to South Sudan, where they are living as refugees. Sudan’s government also has mandated that the more than 500,000 South Sudanese currently living in the north return to the south by April 8, Easter Day for most of the Christian world.

While religious persecution is a factor, that has not always been the case, Episcopal Bishop of Khartoum Ezekiel Kondo stressed when he visited the U.S. last October, explaining that many Christian and Muslim families are intermarried or have lived as neighbors in the past without problems.

“A lot of the South Sudanese say the problem is the Arabs, and we say the problem isn’t the Arabs, it’s the regime,” said the Rev. Tom Prichard, an Episcopal/Anglican priest and executive director of Sudan Sunrise, an organization that works for reconciliation in Sudan, at the March 16 rally. “That’s what this regime wants to couch it as – the Arabs have to stand together against these infidels.”

AFRECS continues to serve as a hub and source of information for Episcopal churches across the country that are engaged with Sudan or would like to be, Kane said.

“It keeps those involved stateside connected with one another and it is our leader in advocacy,” he said.

AFRECS wrote on Feb. 29 to Secretary of State Hillary Clinton, urging her to “muster the international community to commit to a cross-border initiative that would bring needed relief to those who are now isolated from any assistance and who will die without it.”

Signatures are now being gathered for a letter from the Episcopal Church’s bishops to President Barack Obama warning of genocide in Sudan, by bombing or imposed starvation, and calling for the U.S. to work with other nations to create a corridor of access through which aid might flow to the people in the blockaded border regions.

The Episcopal Church’s Office of Government Relations is asking Episcopalians to urge their representatives in government to co-sponsor House Resolution 4169, the Sudan Peace, Security, and Accountability Act of 2012, introduced on March 7 by Democratic Rep. Jim McGovern of Massachusetts, who was arrested alongside Clooney on March 16.

The bill would require the United States to address the humanitarian crisis in South Kordofan, Blue Nile, Abyei, Darfur and elsewhere, and to create a comprehensive strategic plan that would focus on addressing these issues in an integrated, holistic way.

“That legislation is an important, proactive step toward enabling the U.S. to utilize a variety of diplomatic opportunities to press the government of Sudan to end these atrocities,” said Sarah Dreier, legislative representative for international policy for both the Episcopal Church and the Evangelical Lutheran Church in America, during a March 20 telephone interview. “We participated in the National Day of Advocacy by urging our members to support the bill.”

Dreier said the Episcopal Church also takes a holistic approach to the situation in Sudan, working in various ways with the church in both the north and the south and with secular projects.