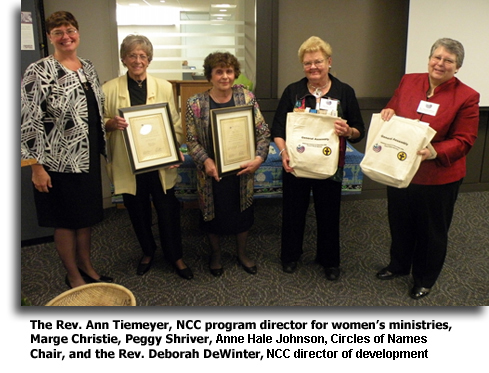 Circles of Names asked a thousand women and men to contribute $100 in the name of a woman who inspired their faith journeys. As a result, the campaign mined a rich treasure of stories of women of faith to stir wide audiences.

The campaign was launched in November 2009 as budgets for women’s ministries were being reduced and in some cases eliminated. The aim was to raise enough money to move toward sustainability of these essential ministries, and to do it by tapping the grass roots of the vast network of church women around the country.

“We did it together,” said the Rev. Deborah DeWinter, director of development for the National Council of Churches.

“The campaign caught the imagination of hundreds of contributors who could name a special woman or women who changed their lives forever. So many persons expressed their gratitude to these women both by their gifts and by their glowing words of tribute.”

The fundraising style of Circles of Names has been a longstanding tradition, said the Rev. Ann Tiemeyer, program director for NCC Women’s Ministries and the Justice for Women Working Group.

“Our foremothers in faith did this — meeting in sewing circles, in Bible study circles, mission circles, hospitality circles — meeting the needs both here at home and abroad with resources generated by their collective creativity and commitment,” Tiemeyer said.

Honorary Chair of the Wise Women Leadership Circle of the campaign was Anne Hale Johnson, herself a mentor of innumerable church leaders. A student of Reinhold Niebuhr at Union Theological Seminary, Johnson was also chair of the board of her alma mater.

Johnson said she viewed the Circles campaign as a “Kairos Moment” for the churches and felt called to support a movement of empowerment for women of faith and for men of faith supporting women in the vital ministry of promoting gender justice.

The gatherings served to honor women whose lives and ministries had a major impact on their local communities. Women who received these special recognitions included Christian, Muslim and Jewish leaders.

A tireless contributor to the campaign was Meagan Manus, who also provided leadership for NCC women’s ministries programs in Fistula awareness, and Words Matter, which seeks to examine the power of language and affirm “expansive language” in our church, society, and interpersonal communication.

One of the highlights of the campaign was the naming to the Circles of Nobel Peace Prize Laureate Leymah Gbowee on October 7, 2011.

Gbowee had learned hours earlier that she was a recipient of the Nobel Prize. An NCC reception in her honor, originally planned as to promote Gbowee’s book and to add her name to the Circles, was hastily rearranged so Gbowee could meet with supporters and the media in The Interchurch Center Chapel in Manhattan.

“Perhaps the greatest challenge of our times is that the need for prophetic ministry increases in urgency as supporting resources decline,” Chapman said. “The accomplishment of the Circles of Names campaign is encouraging because it is based on the faithful network of individuals, women and men, whose collective commitment to women and gender justice ministries has made a tremendous difference.”