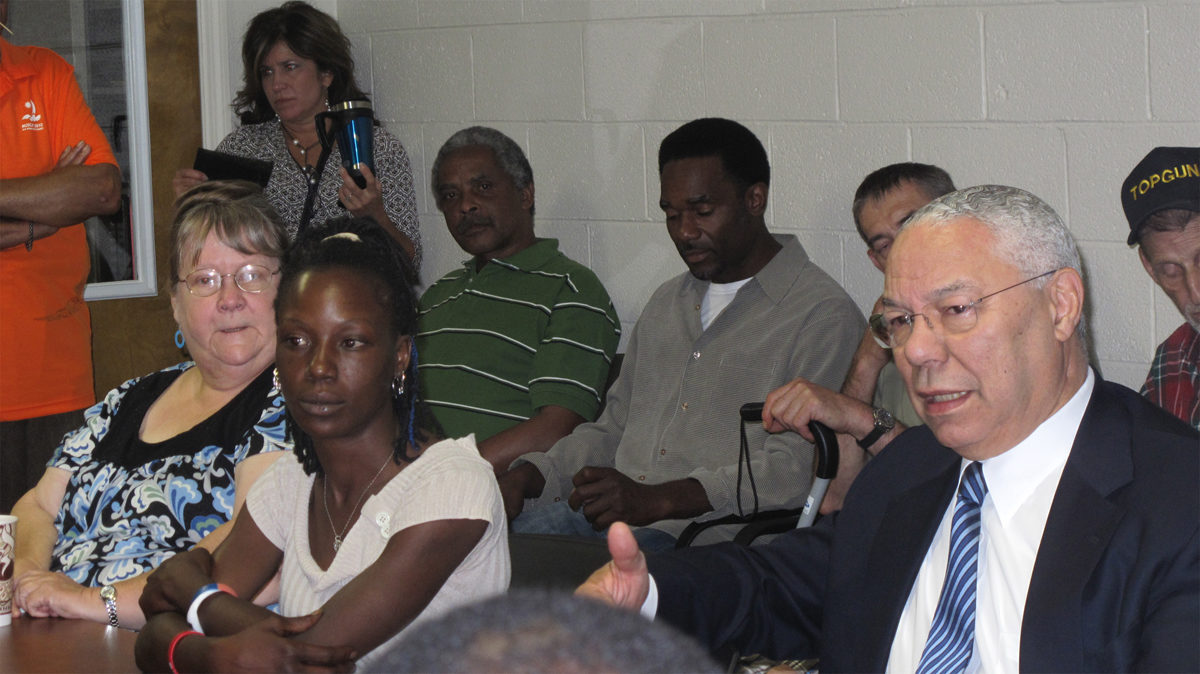 [Episcopal News Service] Eight years ago, Vietnam veteran Garry Clemmons was a homeless addict, depressed and anxious. Today, he’s sober, remarried and working for the Episcopal Church-sponsored program he credits with turning his life around: the Veterans Re-Entry Program at St. Francis House in the Episcopal Diocese of Arkansas.

The veterans program has been helping homeless former members of the Armed Services since 1988. At that time, St. Francis was running a program for the Bureau of Prisons, housing prisoners during the last 60 days of their sentences and helping them re-enter the community, said Executive Director Darlene Bourgeois. The U.S. Department of Veterans Affairs (VA), which was looking to begin programs for homeless veterans across the nation, became aware of this work and asked whether St. Francis would consider running a veterans program.

“We became one of the first 12 across the nation,” she said. “The program has grown quite a bit since then. Now there’s something like 1,100.”

The VA reports that, from October 2008 to September 2009, an estimated 136,334 veterans were homeless nationwide. According to its report “Prevalence and Risk of Homelessness among U.S.Veterans: A Multisite Investigation,” approximately 14 percent of homeless men and 2 percent of homeless women are veterans. “For males, this proportion was about 30 percent greater than the proportion of veterans in the general population, and twice as large as the proportion of veterans in the population living below the poverty threshold. Similarly among the female homeless population, veterans were overrepresented compared to the general population by a factor of two, and by a factor of three when compared to the population living in poverty.”

In Little Rock, Arkansas, St. Francis houses an average of 46 veterans at any given time and assists 140 to 150 a year, Bourgeois said. “That’s been rising a little over the last three or four years.”

They’ve seen an increase in the number of female veterans during the last couple of years, reflecting the greater number of women serving in the military, she said. “We have also had families here. Right now, we have a husband who is a veteran, and he is here with his wife. … We just had a single female with three children leave this week, and we’ve been seeing more of that.”

One woman now in the program is Wanda Herring, 53, who served on active U.S. Air Force duty from 1976 to 1981 and returned from a stint in Italy midway through that year. She attended college while parenting – both children are now grown and serving in the military overseas – and spent years caring for her terminally ill mother. She also spent time in the National Guard but obtained an honorable early discharge because of her family obligations. Her father died in 2001, her mother in 2003.

“The recession on Cincinnati, Ohio, was hitting pretty hard. We had the highest unemployment in the nation at that time,” she said. Many people also were relocating because of crime, and most companies were moving to suburban areas, she said. “I could not afford to commute anymore … I had been living off of my savings and working assignments and part-time jobs, whatever I could get.”

In 2009, Herring was approved as a “parent dependent” to her daughter, on active duty at the Little Rock Air Force Base, and relocated to Jacksonville, where they rented a house outside the base and shared expenses. But when her daughter was assigned to Korea, Herring was considered too well off to continue to qualify as a parent dependent even though she only had a part-time job, and homelessness loomed. “I was not having any luck finding a permanent job.”

She started selling furniture, contemplating a move back to Cincinnati, before receiving a referral to St. Francis House.

“I was kind of hesitant, spooked by it,” she said. “It feels like you’re going to have to start all over again.”

“It was bad enough … having to go back home with my head down, but I would be going back with less than when I left. To a certain extent, I felt like a little bit of a failure. No matter how hard I tried, I couldn’t get anywhere.”

Entering St. Francis “was almost culture shock,” getting used to a group setting, she said. “It takes a few weeks going through – ‘I can’t believe this is happening to my life’ – but it’s better than being on the street. … At least this way, I was able to save a little bit of my dignity.”

Now 60 days into the program, she’s hoping to find housing by Christmas. She’s dating another veteran at St. Francis – they’re contemplating marriage – and working as human resources manager for the nonprofit Central Arkansas Disability Services, although cutbacks there mean she must look for other work with more hours. “Overall, I’m very, very optimistic,”  she said.

“I feel, actually, very, very blessed,” said Herring, who attends both Reed Memorial Episcopal Church and First Baptist Church. “I tried to live right, I worked hard, but sometimes things simply happen. I feel that God, he placed me where I am.”

An outreach of the Episcopal Church, St. Francis House was launched in 1969 as a small program to serve the community’s youth, Bourgeois said. The Rev. Tom Fennell, his wife Beverly and Florence Lewis – now 86 and still employed at St. Francis House – began it with proceeds from the sale of an Episcopal church located where Interstate 630 was going to be built.

“It grew from there, because they noticed that when the kids came in for after-school [programs] they didn’t have proper shoes, they didn’t have a warm-enough coat, they didn’t appear to have enough to eat at home,” Bourgeois said. St. Francis today runs various programs to help meet people’s basic needs – food, clothing, medications, financial assistance. The St. Vincent’s Health System provides a medical clinic for the uninsured two days a week.

The diocese funds the social-work programs, as does United Way and numerous churches and individuals in the community, Bourgeois said. “Last year, they saw over 34,000 individuals.”

The veterans program is funded by a VA grant of about $600,000. A separate Labor Department grant of just over $100,000 funds an employment component for female veterans and veterans with children, helping 80 veterans annually, Bourgeois said. “We have met or exceeded our goals in each quarter that we’ve had that program.”

The VA refers veterans to St. Francis, where the average stay is 120 to 150 days, she said. Two licensed clinical social workers are on staff, and veterans are seen weekly on an individual basis and in a group.

Among other duties, Clemmons runs a veteran-to-veteran group. “It’s just one vet talking to another vet. If one vet has a problem … maybe another vet went through the same thing,” he said. The goal is to get everyone on “the same page, let them know that it’s going to be all right.”

The St. Francis program is very structured, with participants attending classes on topics such as problem-solving, life skills and preventing relapses of substance abuse, Bourgeois said.

“Everyone has a set of personalized goals. The main goal here is to get them back into their own home and stabilized,” she said. St. Francis helps veterans secure income, whether through employment or VA pension or disability payments. “Once they get that income going, they’re going to save 75 percent of the income, and that’s going to be used toward getting them in their housing. A lot of times they have old bills that they need to pay first, and they’ll need deposits and things like that.”

Generally, St. Francis helps veterans work to find housing once they’ve saved more than $600, she said. Monthly rental costs in the area average $425 to $600, and some veterans qualify for subsidized housing, she said. “The economy has been bad here, but unemployment is not as high as it is nationally, so we have had some success in finding people work.”

On Aug. 31, former U.S. Secretary of State Colin Powell, who also served as chair of the Joint Chiefs of Staff, visited St. Francis’ veterans. “He sat down and talked with them for about 20 minutes,” Bourgeois said. “It just lifted the veterans’ morale.”

Bourgeois attributed the program’s success largely to its close partnership with the local VA. “We work so well as a team. We all work toward the goal of the veteran.”

The Episcopal Church connection also is strong, she said. “All the Episcopal churches in this area support us.” One church, St. Mark’s, invites veterans to the church for fellowship and a home-cooked meal every quarter.

Most veterans entering the program have drug or alcohol problems, and some have medical problems, Bourgeois said. Some have dual diagnoses of substance-abuse and mental-health problems, and post-traumatic stress disorder plays a role in some cases, she said. To enter, “they have to have at least 30 days documented sobriety. Most times, they will go through a program at one of the local hospitals and then they will come to us.”

Clemmons, 60, entered the Marine Corps at age 18 and served 13 months in Vietnam. He completed his service in 1974.

“We were not deprogrammed after serving in Vietnam. We just came back, and a lot of things had changed,” he said, adding that his family didn’t understand him. “That’s when I started really using drugs, when I was in the military, and when I got out I just continued to do that. When I went in, I didn’t even smoke cigarettes.”

Clemmons’ marriage ended, and he became homeless. He abused alcohol and drugs. He was referred twice to St. Francis House. The second time, he succeeded in the program.

“You’ve got to want the help,” he said. “It’s got to be about you wanting to change the way you’re living, the way you think, the way you act, and that’s what this program teaches.”

He now chairs his 12-step Cocaine Anonymous group and continues to see a mental-health provider. “Coming through the program kind of let me know it was all right, the problem that I had. I had to learn about this disease [of addiction] that I suffer from, and I didn’t have to be homeless. I didn’t have to live the way I was living. This program gave me a new chance.”

“I found out that the drugs and alcohol wasn’t really my problem. It was my thinking,” he said. “I’d been drinking and drugging for a lot of years. That’s the way I solved my problems. I found out … I don’t have to do that.”

Clemmons has remarried and reconnected with his children and has worked at St. Francis House since August 2003.

“Finally, I’ve got some peace and serenity in my life, while once upon a time my life was based on chaos,” he said. “It’s through this program I learned about this stuff.”

An usher at Greater Macedonia Missionary Baptist Church in Little Rock, he credits his faith – including the spiritual components of St. Francis and his 12-step group – with aiding his success. He needed to learn “that God loves me all the time,” he said. “He has his arms around me all the time, and I was just rejecting the things that God had for me. So today I accept those things as they are. It’s like living life on life’s terms. … I don’t have to act the way I used to act.

“I know I’m blessed, and I know who’s in charge – and it ain‘t me,” he said. “I had to unlearn some stuff in order to become a better person. I had to know that this world don’t revolve around me, and other people are important. … If I don’t do something to help somebody every day, then I’m leaving something out of my program.”