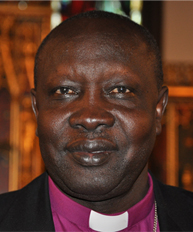 [Episcopal News Service] Times are tense for North Sudan’s Christians, said Episcopal Bishop of Khartoum Ezekiel Kondo, who was visiting the U.S. in October to meet with the Department of State and major nongovernmental organizations and to speak on a panel at an anti-genocide conference sponsored by Save Darfur.

Since July 9, when South Sudan became an independent country, Christians in the majority Muslim north have been under increasing pressure, Kondo said.

“As far as the north goes, the independence has brought a difference,” he said. Christian government officials and private sector workers have been laid off; the government is introducing full Islamic Sharia law which poses a challenge to the church; and South Sudanese are not being given citizenship. People are leaving or being forced out, and the church in Khartoum has been diminished.

Additionally, there has been an influx of refugees from Southern Kordofan, an oil-producing state under northern control in central Sudan, where southern sympathizers have been under attack.

Though the United Nations is in Khartoum, North Sudan’s capital city, the government has declined to open camps for these refugees, so people are staying with relatives, Kondo said. This is a problem because when people are disbursed, aid is difficult to administer, he said. It also is difficult to obtain accurate demographic data and is a way of hiding the situation from the world.

“We were able to accommodate some [refugees] but not all,” he said. “We have organized special prayer for South Kordofan; collected food and clothes, because people just came – ran with their bodies but they got nothing out.”

Since South Sudan’s independence, one church in Khartoum has been threatened with demolishment and another has been burned down, Kondo said. A death threat letter was posted on the home of a Christian family, and authorities have so far been unresponsive.

“It’s a church that grows, but I think it comes as a surprise to most Christians that it is one of the largest churches” in the Anglican Communion, said Richard Parkins, executive director of the American Friends of the Episcopal Church of Sudan, which was coordinating Kondo’s visit.

The Episcopal Church of Sudan is a member of the Sudan Council of Churches, which in May voted to remain as one body for the next two years.

“We will see how it goes,” said Kondo, who chaired the council until recently. “If things are difficult, there is a possibility that this council will be divided into two.”

In addition to the Sudan Council of Churches, there is an Interreligious Council in Khartoum, Kondo said: “It worked well, but for the last five or so years it has declined from its work and has lost momentum.”

Kondo believes in the possibility of restoring cordial Christian/Muslim relations. “It’s only that people don’t get together,” he said. “In the past you used to find in one family you have a Christian and a Muslim living together.”

Sharia law presents problems for Christians because the educational system is Islamic, Kondo said. As religion and state are intertwined, it can be difficult to get a job without converting to Islam. And during the month of Ramadan, when Muslims are fasting, Christian restaurants also must be closed (this was not always the case).

“In the culture, you see people conform even if they do not want to,” Kondo said. “We are asking our friends to continue to pray for us and advocate for protection and freedom of worship in North Sudan. Even if it’s only one believer, people should have that right.”

On Jan. 26, 2012, All Saints Episcopal Cathedral in Khartoum will celebrate its centennial. In addition to local Episcopalians, other denominations also use the cathedral for worship, Kondo said, among them a large, evangelical Eritrean congregation (“they have very nice songs and hymns”) and the African Inland Church (originally Congolese).

— Lucy Chumbley is editor of the Washington Window, a publication of the Episcopal Diocese of Washington.