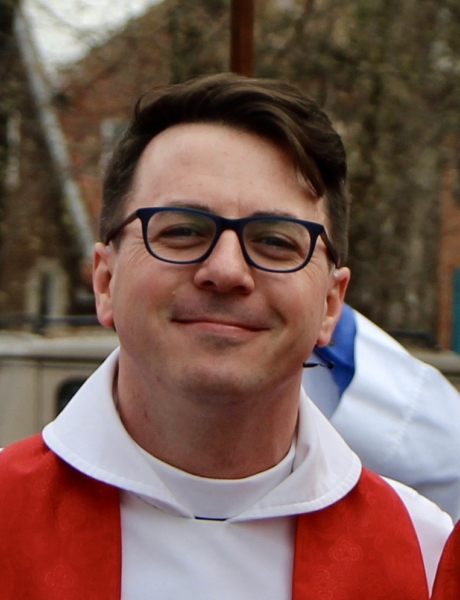 The Rev. Mike Angell is rector of the Episcopal Church of the Holy Communion in Missouri.

The Rev. Michael Angell ‘11, the Rector at Church of the Holy Communion in St. Louis, Missouri, has been named recipient of Virginia Theological Seminary’s 2020 John Hines Preaching Award. The award is given annually to the outstanding preaching entry “where prophetic voice is central within the sermon.”

Named in honor of the former Presiding Bishop of the Episcopal Church, John Hines (VTS ’1933), the award celebrates the ministry of preaching and its importance in our Church by recognizing outstanding sermons that are deeply grounded in scripture and focused on the seen and unseen needs of the worshipping community, the nation, and the world.

“The prophet is the person who brings a word from God to a moment. This is an obligation on the church,” said the Very Rev. Ian S. Markham, Ph.D., dean and president.  “It is exciting to see sermons that are clearly doing this hard work. Rev. Mike Angell is a worthy recipient of this important prize.”

Angell’s sermon from November 19, 2019, is entitled “Moral Courage” and can be found here.In speaking about the sermon, Angell, the author of the forthcoming: How Can I Live Peacefully with Justice? from Church Publishing, notes “”Preaching has really changed for me given the current political context, the nation’s and my own. This sermon reflects my privileged role ministering with a congregation comprising a large number of advocates for justice, who often find themselves frustrated. Missouri can be a tough place to work for change. I chose “Moral Courage” as the center of this sermon, because it is something we need to practice again and again. Building moral courage means we keep trying, and we keep reaching out to folks who disagree with us, to folks who don’t look like us. Jesus built a coalition of disciples that defied the party politics of his day. I wonder if prophetic preaching in our day requires helping folks find inspiration from beyond their usual information silos.”
Virginia Seminary invites all preachers – bishops, priests, deacons and laity of the Episcopal Church in America – to submit sermons for the 2021 Hines Award. Sermons can be submitted either by written document or by audio copy. Sermons preached outside the United States by clergy who are canonically resident in a diocese of the Episcopal Church USA and by lay people who are parishioners in an Episcopal Church USA congregation are acceptable as well. Visit www.vts.edu or email hines@vts.edu for more information.####

Founded in 1823 as a beacon of hope in a country new and finding its way, Virginia Theological Seminary is the flagship Seminary of the Episcopal Church. One of our first benefactors was Francis Scott Key whose poem provides the text for our national anthem. In the 191 years since being established, VTS has led the way in forming leaders of the Episcopal Church, including: the Most Rev. John E. Hines (VTS 1933, D.D. 1946), former presiding bishop of the Episcopal Church; the Rt. Rev. John T. Walker (VTS 1954, D.D. 1978), the first African-American bishop of the Episcopal Diocese of Washington; and theologian, author and lay preacher Ms. Verna J. Dozier (VTS D.D. 1978). Serving the worldwide Anglican Communion, Virginia Theological Seminary educates approximately 25% of those being ordained who received residential theological education. Visit us online at www.vts.edu.