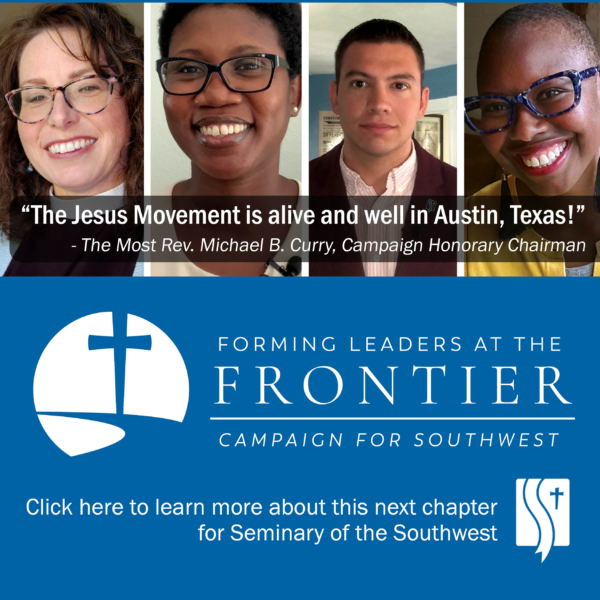 Seminary of the Southwest (Southwest) has announced the launch of FORMING LEADERS AT THE FRONTIER: CAMPAIGN FOR SOUTHWEST, a $20,000,000 campaign that will modernize Southwest’s learning and teaching spaces, enhance scholarship endowment to reduce student debt, and invest in fiscal stability to meet long-term operating needs.

“It is with great pride and overwhelming gratitude that we announce this campaign today. Forming Leaders at the Frontier will equip Seminary of the Southwest for its next creative and fruitful chapter, strengthening the formation of students here and extending our impact in the world. Friends far and wide have responded warmly and generously, I am excited to invite and inspire longstanding and new supporters in the days to come,” said the Very Rev. Cynthia Briggs Kittredge, dean and president of Seminary of the Southwest.

Based on the Campus Master Plan Southwest created in 2016, FORMING LEADERS AT THE FRONTIER: CAMPAIGN FOR SOUTHWEST has three (3) transformational goals designed to enrich Southwest’s well-respected curriculum and provide modern, 21st century facilities and resources that match the trademark academic rigor at Seminary of the Southwest. The $20,000,000 raised will provide:

Southwest has launched a comprehensive webpage, www.campaignforsouthwest.org, which features more information about the campaign, renderings of the envisioned spaces, ways to pledge support, stories from current donors, as well as a video featuring leaders from across The Episcopal Church speaking to the importance of the campaign.

“Seminary of the Southwest is the type of thriving center The Episcopal Church needs. It represents the forefront of theological education and continues to create the academic and formational models that will train our priests and lay leaders to grow our church well into the 21st century. The Jesus Movement is alive and well in Austin, Texas,” said Honorary Campaign Chair, the Most Rev. Michael B. Curry, presiding bishop and primate of The Episcopal Church.

FORMING LEADERS AT THE FRONTIER is the largest and most comprehensive capital improvements plan in Southwest history. It will transform the existing Booher Library and academic building into a Teaching Complex that will become the hub of education on campus. New study spaces, conference rooms, and audio and video recording studios will reflect advances in pedagogy. The Technology Hub will centralize information technology support services and house multimedia learning studios for students to practice chanting liturgy, review recorded curriculum and lectures, and enhance preaching and presenting by integrating technology into sermons and presentations. The Learning Commons, Triangle Courtyard, and Gallery will provide spaces for community events, including theological lectures, musical performances, and visual art exhibits. Spacious, renovated classrooms will enhance Southwest’s collaborative learning style.

The project will strengthen Southwest’s competitive advantage by increasing their ability to attract students and faculty with an interactive classroom experience, new teaching modalities, and access to virtual information. Modernizing and upgrading the building will result in reduced repair and maintenance costs.

In a video announcing the launch of the campaign, Dean Kittredge shared that because of the initial enthusiasm and momentum of the project vision, the campaign has already secured commitments equaling 85% of the campaign goal.

“This early success,” says Kittredge, “is because Southwest has been blessed to have gathered over 90 committed volunteers – most of whom are alumni, supporters, or leaders in The Episcopal Church – who have led the campaign. Their enthusiasm, followed by the enthusiasm of the donors they helped us engage, was proof that this project was not just a gift to Seminary of the Southwest, but to The Episcopal Church as a whole.”

The full roster of Campaign Leadership, along with a fundraising totals and other details, can be found on the campaign website, www.campaignforsouthwest.org.

About Seminary of the Southwest

Established in Austin, TX, in 1952 by the Rt. Rev. John Hines, Seminary of the Southwest is one of 10 accredited seminaries in the Episcopal Church. Southwest’s vision is to be a community for formation and leadership within the church supported by a strength of program, endowment, and environment that assures excellence in theological, counseling and pastoral education.

Southwest offers a rich intellectual environment and stimulating and challenging community for learning and formation. Southwest provides exceptional residential formation for ordained ministry; has a sought-after masters degree in clinical mental health counseling; offers professional master’s degrees to lay professionals and church leaders in a range of denominations and faith traditions; and serves the church through innovative models for local formation and ongoing training.