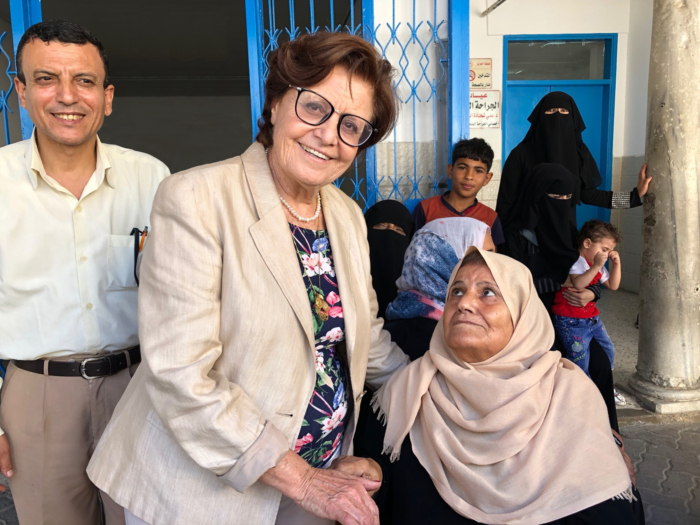 On May 10, 2021, a war began in Gaza. Eleven days later, 256 Palestinians, including 66 children, had been killed by Israeli bombings and 13 Israelis were dead from Hamas rockets. Thousands of buildings were destroyed in Gaza and more than 60,000 Gazans were left homeless.

While the massive bombardment stopped, the pain of loss endures. The people of Gaza remain trapped in a war zone.

Ahli Arab Hospital, the only charitable, the only Christian hospital in Gaza, is owned and operated by the Episcopal Diocese of Jerusalem. Ahli Hospital cares for more than 40,000 people each year but since the end of the war last May – with government hospitals closed for all but emergency treatment – the demand for Ahli’s services by desperate families has dramatically increased.

To mark the one-year anniversary of the war, American Friends of the Episcopal Diocese of Jerusalem (AFEDJ) is launching a campaign to ask Episcopalians across the church to demonstrate to the remarkable Christian leaders of Ahli Arab Hospital in Gaza that they are not forgotten.

“Nothing has happened, nothing has been rebuilt. There are huge rubble piles that used to be buildings and streets are still unpassable. Those who lost homes have moved in with their families. Now you see 20 people living in three rooms.”

Life in Gaza in the midst of destruction.

Suhaila sees the impact of the war every day. “People in Gaza have never been so much in need,” she said. “The demand for our services is more than we can provide. We have waiting lists for surgeries, underweight and malnourished clinics, breast cancer screenings, and trauma therapy. We have immense shortages of medicines and medical supplies and long hours of electricity outages.”

Impoverished Gazans know that Ahli Hospital is a place where they will receive compassionate care without regard to religion, ethnicity, or ability to pay. Suhaila said, “A mother who came to Ahli with her child told me, ‘We are here because you are Christians. We know we won’t be neglected here.’ People know we help everyone that we have the means to help.”

Gaza is not in the headlines this May. To much of the world Gaza has disappeared. But the Gazan people are still there. Living conditions are still appalling. Hundreds of thousands of children suffer from the trauma of witnessing war and living in extreme poverty. Ahli Hospital is still there. Suhaila is still there. She is one of the few Gazans who could leave. She has a U.S. passport. But she stays to help her people.

Recently, important sources of international aid to Gaza have been diverted to Ukraine. While our eyes turn toward Ukraine and our hearts break at the senseless killing of innocents there, we must remember Gaza.

“God will never leave this hospital. Ahli Hospital is a witness to God’s miracles and to the love of God. All our American friends are witnesses to God’s love. You are our partners in hope,” Suhaila said last week.

AFEDJ ensures that every dollar designated for Ahli Hospital is sent immediately. The gift you make today will buy supplies and medicines and support the brave nurses, doctors, and staff at Ahli tomorrow.

Please give generously at www.afedj.org or by check to AFEDJ, 25 Old Kings Highway North, Suite 13, Darien, CT 06820. Please include “Gaza” in the memo.

Your donation will let the leaders of Ahil Hospital and the people of Gaza know they are not forgotten.

Listen to Suhaila tell her story in this brief video.