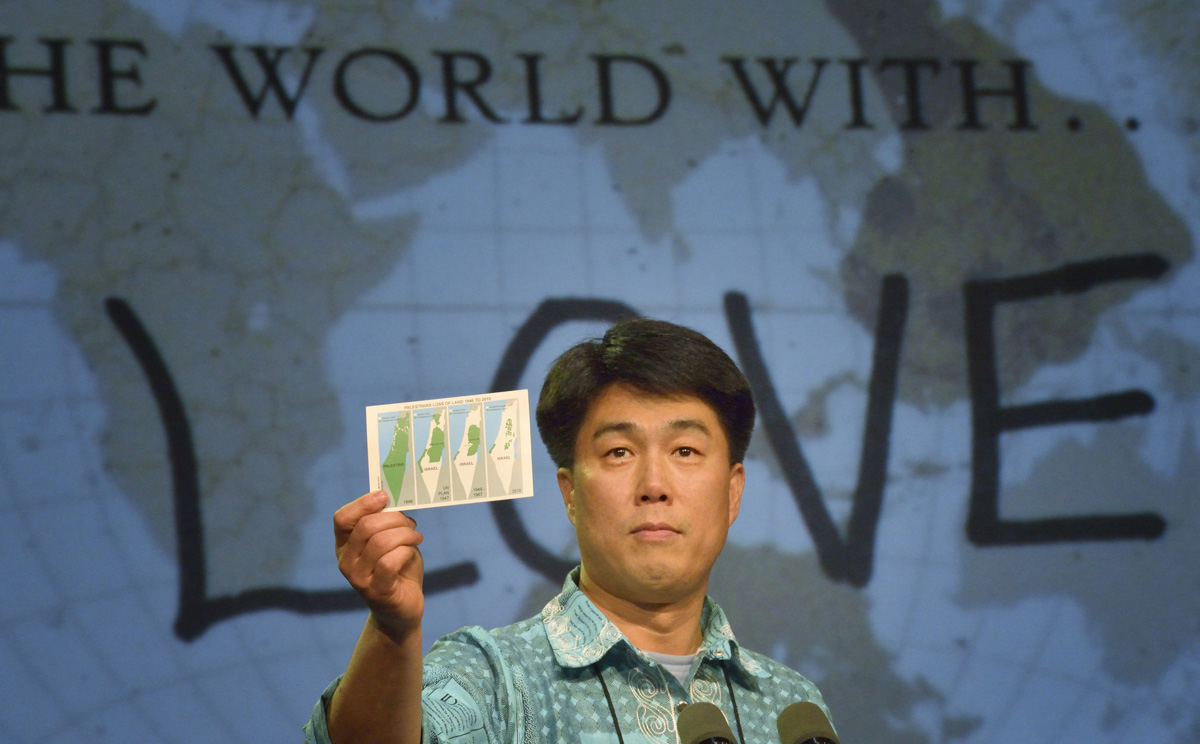 The Rev. We Hyun Chang, a delegate from the New England Annual (regional) Conference, holds a map of illustrating Israeli expansion into the West Bank during the May 2 session of the 2012 United Methodist General Conference in Tampa, Fla. Chang presented a motion favoring divestment from corporations profiting from the Israeli settlement of occupied Palestinian territories. The petition was defeated. UMNS photo/Paul Jeffrey.

[United Methodist News Service – Tampa, Fla.] Delegates to the United Methodist Church’s top lawmaking assembly approved petitions May 2 dealing with the Palestinian-Israeli conflict, but they did not approve a measure to divest from specific companies.

Delegates instead approved a report calling on the United Methodist Board of Pension and Health Benefits to explore “serious peace-making strategies in Israel and Palestine, including positive economic and financial investment in Palestine.”

The Israeli-Palestinian issue dominated the afternoon plenary at General Conference. Nearly 990 delegates from around the world are gathered April 24 through May 4 for the assembly, held every four years.

The petition originally called for divestment from Motorola Solutions, Hewlett-Packard and Caterpillar, which provide products that are used by the Israeli military in the occupation of Palestinian lands. The Finance and Administration Committee instead substituted language urging “positive, rather than punitive options,” according to Jessica Vargo, East Ohio delegate and committee chairperson.

The petition also asked United Methodist general agencies and boards to ask companies to adopt United Nations Guiding Principles on Business and Human Rights and to consider economic sanctions with companies that refuse.

Vargo noted this petition did not mean that divestment from companies would not be considered. Rather, the petition placed the decision to divest into the hands of the Board of Pension and Health Benefits, as has been historically done, not General Conference.

A minority report urging divestment and calling on United Methodist boards, agencies, annual conferences and local churches to take into consideration a company’s involvement in Israeli occupation when making investment decisions was rejected.

Those opposed to the committee’s recommendation said it did not go far enough in helping end the struggles of the Palestinian people and that past efforts encouraging companies to change their behavior had not worked.

Robert Lee, 19, a student at Appalachia State University, Boone, N.C., and a delegate from the Western North Carolina Annual (regional) Conference, said he was moved by stories about those who were injured or killed when Palestinian homes were bulldozed to make way for settlement building.

“If we’re trying to show this a conference of change, it’s time to put our money where our mouth is,” he said, advocating for divestment.
Sarah Ann Swenson, a delegate from Minnesota, said the lack of concrete action on the issue is one reason “people between the ages of 18 and 21 are missing” from the United Methodist Church. They see the church as “small-minded and hypocritical.”

“This petition is devoid of any possible way to put our dollars to good work,” she said. “If we can’t take action, let’s at least stop hiding behind pretty rhetoric.’

Those opposed to the minority report said targeting specific companies blames the companies for making the products, rather than citing the people who use the products, and it might set a precedent for divestment from other companies related to a myriad of social issues.

Delegates also approved a petition calling for opposition to Israeli settlements on Palestinian land through nonviolent responses, but the petition did not specify what those responses would be.

A rejected minority report did note specific actions: encouraging Palestinians and Israelis to engage in direct negotiations toward a two-state solution “and an end to the Israel occupation and settlement building,” calling on the U.S. government to renew negotiations, and committing to study and make concrete recommendations for action by the church that do not include boycott of any party.

“I am encouraged; this was an educational session,” said Tracy Smith Malone, chair of Church and Society Committee A. “I think we opened the eyes of delegates, and now they will have conversations in their local churches and annual conferences about aligning investments with our values. I think our Christian friends in Palestine will hear we stood in solidarity with them. We could not have even had this conversation four years ago.”