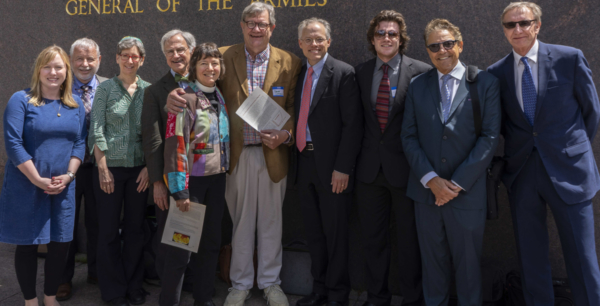 What is an emergency? Merriam-Webster defines “emergency” as “an unforeseen combination of circumstances or the resulting state that calls for immediate action.” Does climate change count as an emergency? Not if an “emergency” must be “unforeseen,” because when it comes to climate change, scientists have been sounding the alarm for decades, saying that burning massive quantities of fossil fuels could lead to catastrophe. Of course, the fossil fuel industry (c.f. #ExxonKnew) has spent millions of dollars trying to make the climate emergency as “unforeseen” as possible, for as long as possible, to as many people as possible. But the clock has run out. The time of reckoning is at hand. Foreseen or unforeseen, the climate crisis is upon us and it calls for immediate action.

Last week – the same week that the U.K. and Ireland became the first two countries to declare a climate emergency, and the same week that the Anglican Communion became the first global religious body to recognize a climate emergency – National Religious Coalition on Creation Care (NRCCC) released “Religious Declaration of Unprecedented Human Emergency” at its annual gathering in Washington, DC.

The statement clarifies two essential facts: humanity has an extremely short window of time in which to avert irreversible climate chaos, and religions around the world consider protecting God’s Creation a moral and spiritual imperative.

The stakes are high. As the opening lines of the Religious Declaration explain, climate change is unlike any other challenge that confronts humanity, because it is largely irreversible for a thousand years after emissions stop, and its effects will be felt for thousands of years after that. “Human-induced climate change is underway now, and its impacts are greater and more extensive than scientific models predicted. We will significantly alter the future of civilization as we know it and may eventually cause its collapse if we continue down this path.”

The Declaration calls for bold, concerted action: “Decades of delay on climate action have made small corrective measures and incremental approaches useless. Those who are invested in maintaining the status quo, or who put forth proposals that are clearly incompatible with what climate science demands, are condemning innocent young people – including their own children and generations to come – to a future of unimaginable suffering: the mass death of human populations and the extinction of species.”

The Declaration interprets the climate crisis within a moral framework: “Further delay in addressing climate change is a radical evil that as people of faith we vigorously oppose.”

Regarding that assertion, one of the principal writers of the document, Dr. Richard W. Miller, Professor of Philosophical Theology and Sustainability Studies, Creighton University, added later: “The manufacturing of doubt and the sowing of confusion about climate change by fossil-fuel-industry-funded think tanks, the deceptive climate-change reporting by ideologically-driven media outlets, the investing in fossil fuel infrastructure by banks and high-profile investors, the expansion of pipelines, oil, and gas wells are all radically evil actions that continue to this day. The institutions that engage in these actions are enemies of humanity and the web of life. We will oppose these institutions from our churches and synagogues, from our pulpits and lecterns, and from our social halls and gathering spaces. We will fill the halls of power like the young people in the Sunrise Movement in their push for a Green New Deal; we will join school-aged children in the streets striking for climate action; and we will rebel with the young people in the Extinction Rebellion in the race to head off the destabilizing of the climate system within which civilization developed.”

Are there risks in declaring climate change an “emergency”? Here are two. One risk is that we could waste the moment, and propose solutions that are weak and ineffective. We could squander “climate emergency” on half-hearted measures, delayed action, and supposedly “pragmatic” policies that don’t address the crisis at the scale and pace required to protect human civilization and avert ecological collapse.

A second risk in declaring a climate emergency is that political and corporate powers could seize the opportunity to consolidate control and shut out communities that are already vulnerable and marginalized. An autocratic leader could use a national emergency of any kind to threaten democracy and invite tyranny.

Religious Declaration of Unprecedented Human Emergency seeks to avoid both traps. It presents a menu of effective solutions. And it underscores the need to address the climate crisis and social injustice at the same time. As Pope Francis stated in his encyclical, Laudato Si’, we must respond both to the cry of the Earth and the cry of the poor.

That is why the Religious Declaration supports “the bold direction of the Green New Deal, or other similar science-based proposals, as an opportunity for this country to commit to stabilizing the climate while creating ‘unprecedented levels of prosperity and economic security for all people of the United States.’ This specifically includes low-income communities, communities of color, and those that have historically been marginalized or underserved. The Green New Deal is the first resolution that addresses the climate crisis with the urgency, focus, and comprehensiveness that the situation requires. Our nation mobilized every part of society during World War II and the Great Depression. Like the Greatest Generation, we must rise to the occasion and commit to doing what science says it takes to avoid irreversible catastrophic climate chaos and make a rapid and just transition to a clean energy economy.”

The Religious Declaration amplifies statements about climate change that major denominations have already issued. Religious groups across the United States, including the National Council of Churches, U.S. Conference of Catholic Bishops, Central Conference of American Rabbis, National Association of Evangelicals, and the Standing Conference of Canonical Orthodox Bishops, have all called upon policymakers and elected officials to take strong action to address global climate change.

The people who wrote the statement hope that it will build momentum and moral courage in our collective efforts to avert climate catastrophe. God sent us into the world to bless and heal, not to ravage and destroy. People of faith affirm that the natural world is a gift of the Creator and entrusted to us to cherish and protect. We recognize that humanity is hurtling willy-nilly down a suicidal path that risks bringing down not only our own civilization but also the biosphere as it has evolved for millennia. As people of faith, we stand with the Spirit of life, who calls us to build a more just society in which all God’s creatures – humanity included – can thrive.

The Rev. Dr. Margaret Bullitt-Jonas, of Northampton, is one of the principal authors of “Religious Declaration of Unprecedented Human Emergency,” which can be read and downloaded at the NRCCC Website. She is Missioner for Creation Care in the Episcopal Diocese of Western Massachusetts and Massachusetts Conference, United Church of Christ. This essay is based on a blog post on her Website, RevivingCreation.org.